THE CUP THAT DOESN'T CHEER ANYMORE! 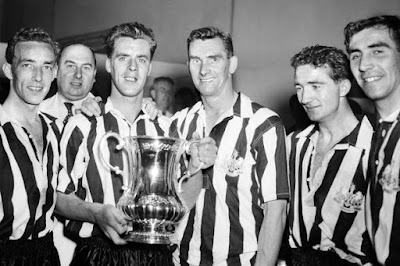 News that up to 11 changes may be made for wor FA Cup thord roond tie haz reached The Geordie Times!

This doesn't reeely suprize us az staying in the Premyaa Leegue iz wor top priority now!The FA Cup iz a shadow of wot it used to be in the 1960s when aa started gannin to games!

It woz THE domestic trophy to win, even better that the Leegue title at the time!

For example, when we lost to little Carlisle at SJP in the late 1960s a crowd of 56,500 plus torned up to witness it!

Now the exact opposite happens and crowds at FA Cup ties at SJP are usually 20,000 less than for Leegue games! (That's when they decide to let us back in, like!?)

We are now reduced to teams puttin oot a resorve X1 so az not to sustain injuries to their star players for Leegue games!

This is how far this once mighty cup compitition, haz fallen in the peckin order!

If it's TRUE that NUFC will play a virtual resorve side then a hidin' is likely to take place at The Emitates Stadium against The Arse on Saturday! (Live on the Beeb at '5:30 bells'

The cup that doesn't 'cheer' for certain now!

Posted by fink the mad-sad groundhopper at 10:44