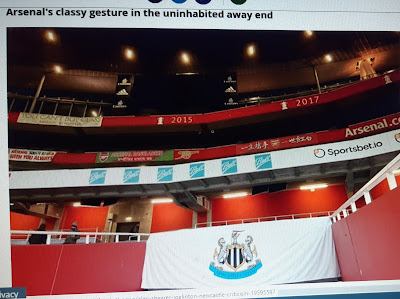 We've said it before and we'll say it again, that watchin futbaall in empty stadiums from wor livin rooms and pubs (when they are open!) iz a absolutely cr*p!
*
Az the lockdown is due to carry on til at least the end of March, it will meen that we will have gone a whole year withoot wor NUFC 'fix'---sommik we could never have believed 12 months ago!
On Saturday we played at The Emirates Stadium in front of 60,000 empty seats with loads of Arsenal flags and banners scattered aroond the groond!
The away end even had a solitary NUFC banner draped ower a waall.
A nice touch by The Arse!
We shall continue to watch games from soulless stadium for the rest of this season at least on wor tellys and laptops and sometimes radio commentaries!
Like I will have to do tomorrow when we play Sheff U at Bramall Lane, as I will be drivin back up the M1 in mee truck at that time from Redditch in deepest Worcestershire!---
Ironically, I will probably pass Sheffeeld sometime durin the 2nd half as I crane mee neck to the left for a glimpse of the floodlights in the distance!
Whoever would have believed THAT scenario 12 months ago???
Posted by fink the mad-sad groundhopper at 10:50