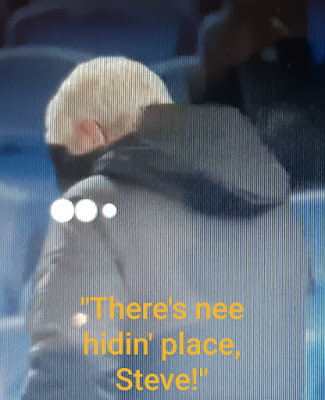 14,000 Toon fans responded to a poll in the Toon's local paper (The Ronny-Gill) and 95% have said they want wor beleagered manager to eethaa resign or be sacked! (We suspect that some who want him to stay are smb supporters!)

Brucey haz buried his *'mincers' in his face mask (see above!) 'in denial of the predicament we are in' and refused to resign, statin that he iz the best man for the job? And of course he wants hiz £4 million compensation should he be sacked---nowt if he does resign! (*Mincers= mince pies =eyes!)

Wor silent MD, known as Penfold, for his uncanny resemblance to the cartoon character from the 'Danger Mouse' TV series, takes his orders from the Toon owner, known affectionately as 'The Fat Controller' to Toon fans and the word is that they are NOT gannih sack him for the above reason!

Brucey actually believes that he will still be in charge NEXT season!---A nightmare scenario for certain! And in what division?

Rumour has it that Brucey refused to take trainin last week, as the fallout with some players haz reached breaking point! ---And of course there is 'the mole', giving snippets of info to the press!

This is ridiculous and sommik must give before too lang az this situation can surely not continue az we gan from bad to worse!

Posted by fink the mad-sad groundhopper at 14:30