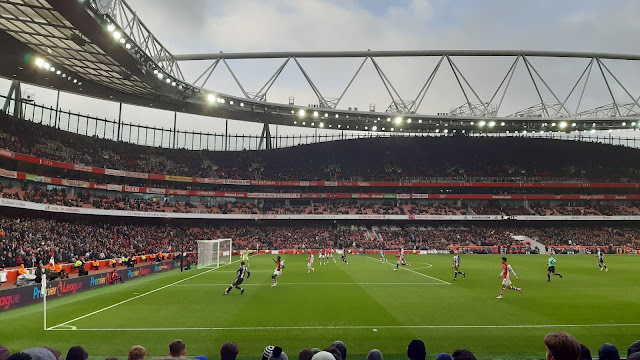 He told me that wor train to London at '5:59 bells' on the Saturday mornin could be cancelled because of 'storm Alwyn' which woz predicted would bring 100mph gales and very heavy rain and snow!

A change of plan woz needed so 'Al' booked us on the '9:15 bells' on the same neet, hopin that it would take us to London!----The anly problem woz we had nee digs booked for an owerneet stay and would probably have to 'waalk the streets' when we got there at '1:30am bells'!

Aa met him in The Town Mouse micro pub for a few 'liquid lubrications' before heedin for The Central to (hopefully?) catch wor 'night train to 'the smoke'! <(The nickname for London)

Anyway!--- We left 'The Mouse' and had to endure torrential rain and gale force winds on the 10 minute waalk for wor train!

We were like drowned rats (or shud that be 'mice', since we'd been drinkin in a boozer of that name?) by the time we reached the shelter of the station roof and very luckily wor train WOZ'NT cancelled (unlike many others) and so 'on we got' for the torturous 300 mile jorney south, with speed restrictions in place of 50mph or much less, because of the high winds!----Ower 4 hours later we arrived at King's Cross after wot seemed like a lifetime on the train! (which woz virtually empty, coz they said 'don't travel' on the notices!

'Mal the Inglish skoool teechaa' (hiz spellin' NOT mine!) who had went doon in the afternooon, had booked himself into a hotel in Finchley(north London) and had managed to change it to a triple room, so we had somewhere to sleep!

We were shattered by this time and plonked worselz doon on the beds and went to sleep aalmost immediately! "ZZZzzz!!!"😴

We awoke at '8:00 am bells' to heed for Holborn by tube and the kip hadn't done me much good, az aa felt like a'd been dragged backwards through a hedge 37 times! (The 12 pints and the soakin' the previous day had certainly taken its toll!!!) 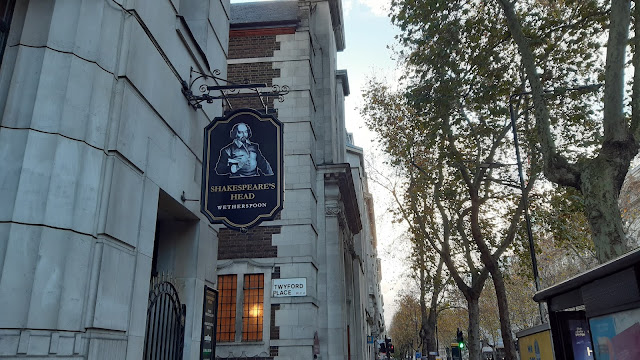 The Shakespeare woz wor destination, which iz next to Holborn tube station for some much needed 'scran' and some more 'ale' (will we never learn!?)

Part Two: "The Stadium from Hell!" 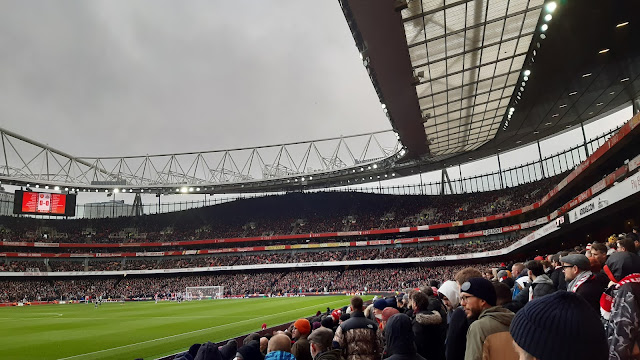 It woz soon time to heed for The Emirates Stadium, for wot would be wor 15th or 16th visit?  The away end woz half empty az the game kicked off at '12:30 bells' (coz the trains were late of course--and some cancelled!) and we held wor own for most of the forst half, with Shelvey hittin the bar after a lang range effort woz tipped onto it by the Arseholes goalie!----Then a shirt pull on Schar in the box wasnt spotted by Atwell the ref or VAR----That woz it from 'us' az the home side missed a couple of good chances to take the lead!  By this time wor end woz virtually full apart from 2 seats next to me, which shud have been occupied by 'Blondie Alan the Morris Dancer' and 'Jimmy the Riddler'! (Just why they couldnt put the kick off time back so that those on the delayed trains could get there for the start, iz shockin' and a total disregard for the travellin fans!)

We were in row 10 near the front and wor seats were soaken with the rain and yes we were VERY wet! (Another 'drowned rat'/'mouse' experience---which they missed!!)

Unfortunately 'Blondie' and 'Jimmy' live 'in the sticks' and were unable to get to Durham station in time to catch their train! 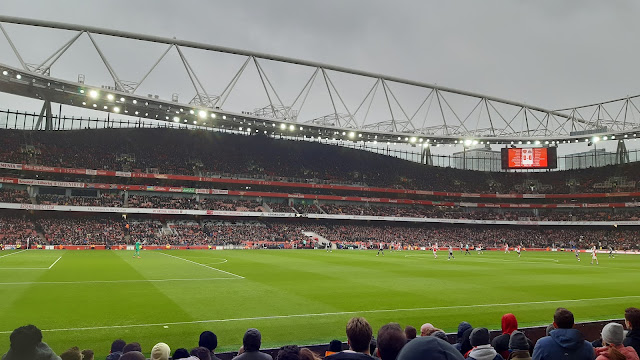 The 2nd half I'm afraid woz wor downfall az The Arse pressed for the forst goal!----It wasnt lang in comin and in the  55th minute Saka hit a great shot across the box to beat Martin Dubravka in The Toon goal!

It woz soon 2-0 to the home side, scored by Martiell and 'curtains' for NUFC who have now lost on wor previous 11 visits to this venue and its SEVEN years since we actually scored a goal here (Perez in 2014!) Aalso a foul on Wilson in the box woz waved away by the ref and just why VAR didnt check this iz anybodys guess!?

After the 2nd goal went it The Arse fans taunted us with chants of: "You're rich, but you're f**kin' sh*t!"  (Reality check!) 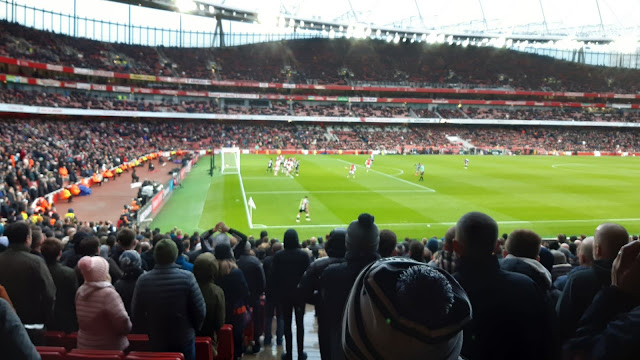 'The Stadium from Hell', az far az we are concerned! 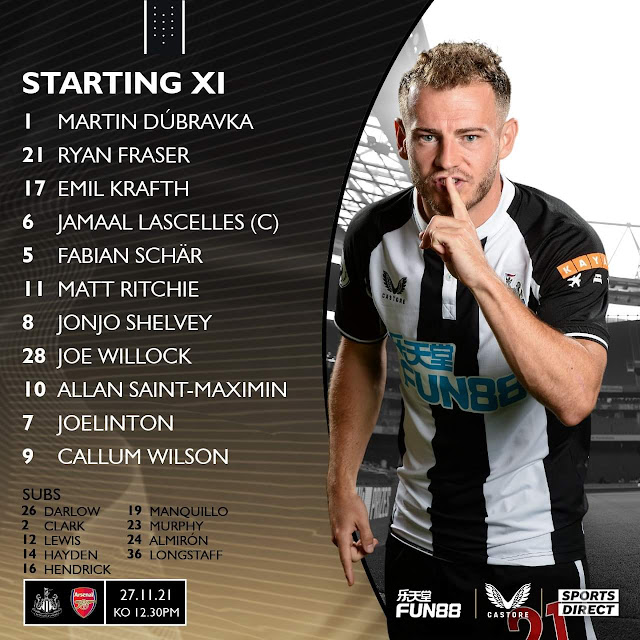 It woz back to King's Cross after the game where were booked on the '4:30 bells' train yem!  WE were told by a train crew member that we COULD get on a train that left at '3:30 bells' az travel plans and restrictions were NOT in place!----We settled doon in forst class, anly to be told ower the train loudspeakers that we MUST now travel on wor original trains!---We were forced to get off and heeded for The Parcel Yard boozer for some more 'ale' before retornin to catch the '4:30 bells'! 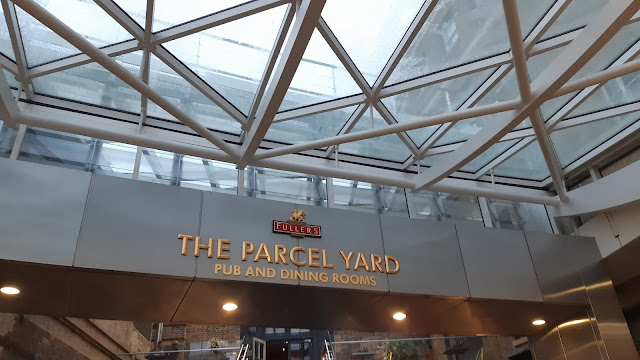 Some young Toon fans aged aboot 19 to 25 got on and sat in some other seats behind us, carryin bottles of wine and spirits and they were obviously on drugs az well! (The didn't have 1st class tickets, but there were nee ticket checks!?)  They spent the next 5 hours tryin to sing crap songs at the top of their voices and banging on the tables and windows, az they got drunker and drunker by the minute! (there woz nee escape!)

Neebody from the train crew came to try and calm them doon and from past experiences its a waste of time to try and tell anybody on drink and drugs to act sensibly!----On top of that there woz NEE food or drinks services, which yoo normally get if yoo have a forst class ticket!  (We assumed that this woz because of the idiots behind us and they didnt want any confrontations !)

There woz aalso a fight in the next carriage where one fans got punched in hiz face by a fellow mortal Toon fan!

A'v been travellin' to Toon games on trains for ower 50 years and this, woz the worst trip EVER, for certain! (We have applied for a full refund!- I didn't buy any food or drink for the train, az I expected to be fed and watered and woz starving by the time we got back!)

Anyway!---after nearly 5 hours of 'noise pollution hell', we arrived back in The Toon and aa jumped onto mee bus yem, with none of them on board! (peace porfect peace!)

PS: Az an old mate caalled Dinzzy added: "We were aalways drunk az 'billy goats' when we were younger, but never wanted to fight nee f**ker!"( And never fight or annoy wor own fans eethaa, Dinzzy!)

We said that 'storm Alwyn' had disrupted wor travel plans, when it woz n fact 'storm Arwen'!---- We apologize Profusely to 'storm Arwen' for any distress caused by wor misinformation!

Posted by fink the mad-sad groundhopper at 12:22