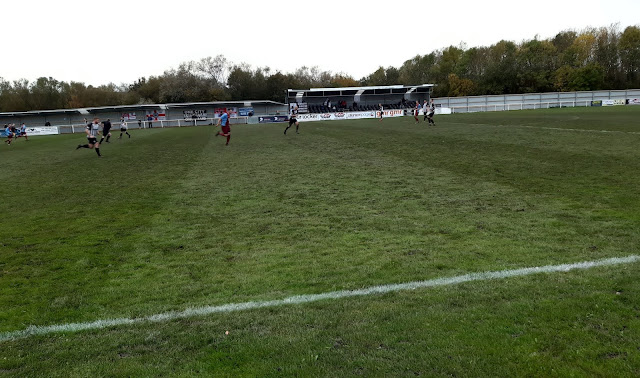 We intended to gan to Lancashire for wor new groond 'fix' where Dunston were away to Mossley near Oldham, but one of the Mossley players had 'the bat out of hell' virus and the game woz postponed!

And so we had to make alternative plans and wor new groond 'fix' took us to Scotswood in the far west end of The Toon where Blue Star were takin on Porcy Main in a Northern Alliance Leegue game at The Scotswood Sports Centre!

Me and 'Tex' Taylor caught the number 40 bus from Gallowgate near St. James' Park and made the 'trek' to Scotswood via St. James' Park, Stanhope Street and the A69 West Road. 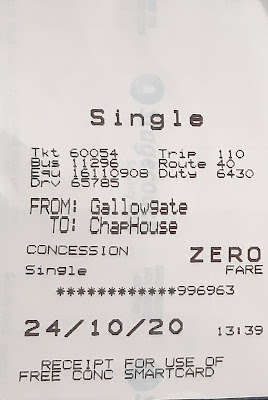 We arrived 20 minutes before the '2:30 bells' kick off to be told at the gate that it woz "Season ticket holders anly!" coz the capacity limit woz just 40 in this leegue! (Ridiculous!) 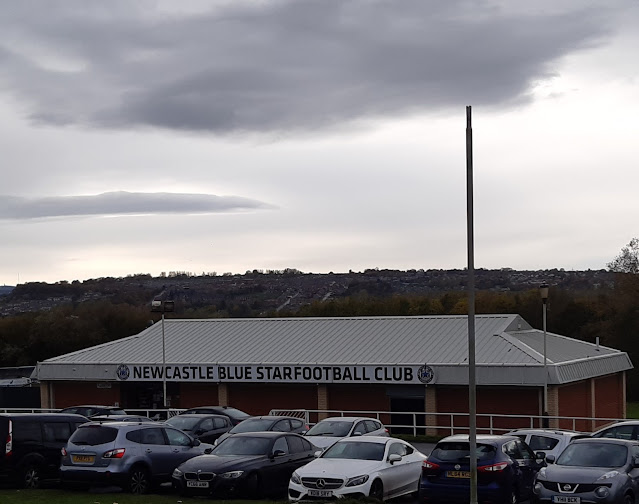 We didnt have season tickets of course, but after the gateman had had a conversation with a committee man (we assumed?), they eventually decided let us in for the princely sum of 3 quid each, which we were more than willin' to pay! (A 40 crowd limit iz crazy!---Dunston can let 200 in, so why not here?)

Az the game kicked off there looked to be well ower 40 in attendance, in a groond that had 3 smaall covered stands, which we didnt expect! (an open field with a little shelter iz wot we expected!) 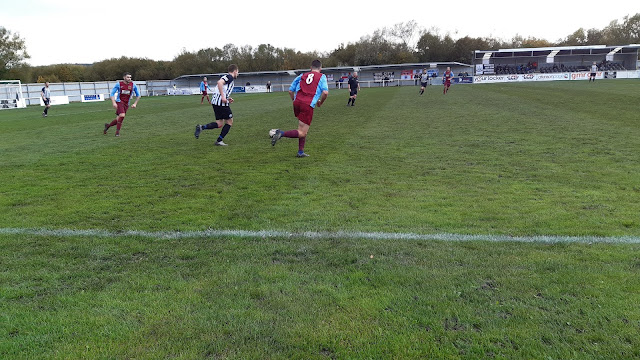 Az usual for these games, there were nee team sheets or programmes, so we didnt have a clue just who woz playin for eethaa side! 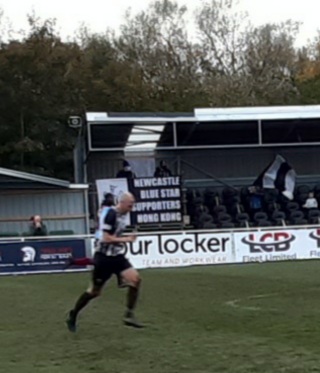 And so aa looked it up later, on Blue Stars Twitter feed and have added the goalscorers!

There then followed a 'goals feast' with the home side in black n white stripes, takin the lead in the 7th minute through Broadhead with a fine shot! 1-0 to Blue Star

An unfortunate own goal at the othaa end levelled the scores in the 26th minute when a cross by a Porcy Main player woz deflected into the goal by a 'Star' defender!

THE BANNER SAYS: 'ONE CITY--ONE CLUB'!
AND OF COURSE THERE IZ 'ONE FAN'!

The home side retook the lead in the 25th minute when their number 9 who I recognised, but couldnt put a name to?, scored when he woz put clean through! (Andy Bulford who used to play for Dunston)

'Bully' added hiz 2nd from the penalty spot in the 34th minute and completed hiz hat-trick bang on half time with a fine heeded goal! 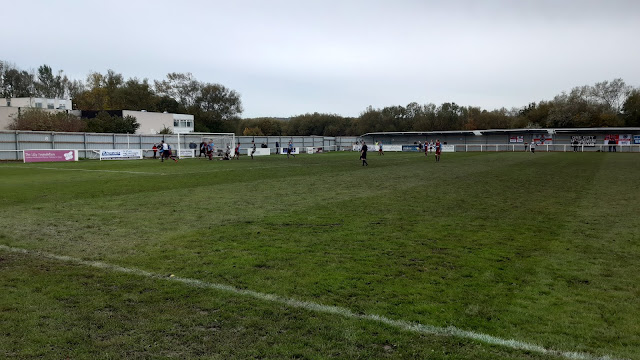 In between this, there woz a goal for 'Porcy' in the 40th minute from their number 15 with a good shot, after some bad defendin! ( Kelly) HT 4-2 to Blue Star! 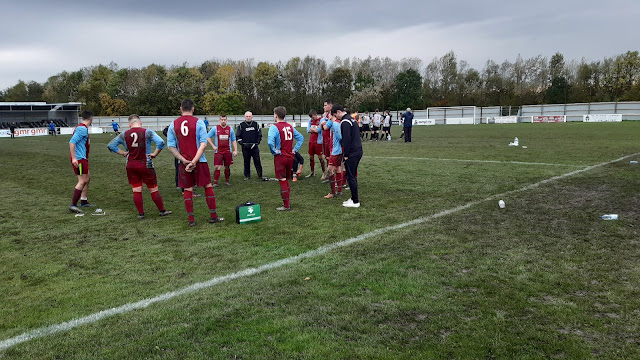 NEE CUPS OF TEA IN THE WARMTH OF THE DRESSIN' ROOMS HERE, DURIN' THE HALF TIME TEAM TALKS, IN THIS LEEGUE!

Bully then got hiz 4th goal on the hour mark, with a scrambled effort in front of goal!

Collinson then pulled anothaa goal back for 'Porcy' in the 71st minute---a shot from Collinson! 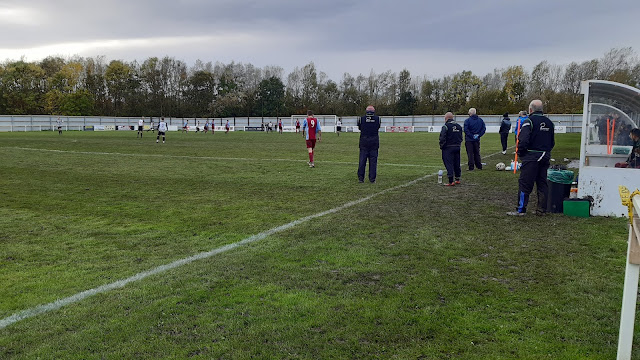 PORCY MAIN HAVE 12 'PLAYERS' ON THE PITCH!

The final goal in this 9 goal feast came in the 82nd minute when Pentland fired home! (Well worth the £3 admission fee!)

On top of aall that! the frame of the goal woz aalso hit several times in this topsy turvy game and man of the match woz Porcy Main's keeper who looked a bit owerweight, but make quite a few ootstandin' saves to keep the score doon!

Official attendance: Beleeeve it or not, 40! 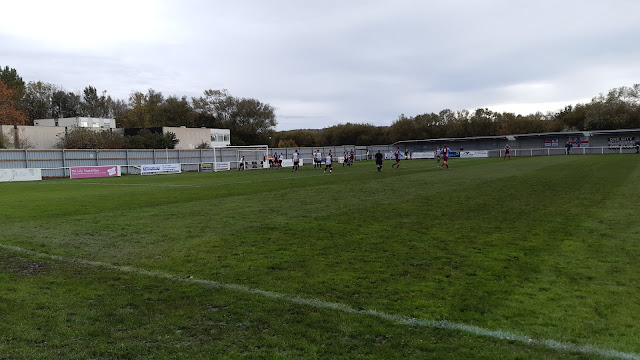 THE SCOTSWOOD SOCIAL CLUB IZ THE WHITE BUILDIN' BEHIND THE GOAL!
(UNBEKNOWN TO US!)

After the match we heeded for wot we thought woz The Scotswood Social Club up the hill for a few pints, but it woz closed?- 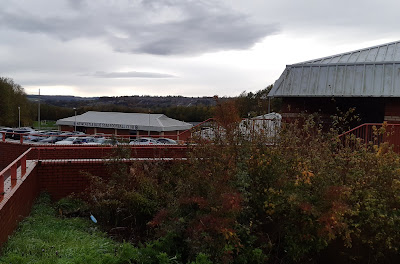 THE GROOND IZ IN THE DISTANCE---THE SPORTS CLUB
IZ THE BUILDIN' TO THE RIGHT!

--We foond oot later that that we'd went to the wrang place,  az The Scotswood Club woz forthaa doon the road behind one of the goals, which owerlooked the pitch! (We'd mistakenly thought that The Scotswood Sports Club woz the social club!) 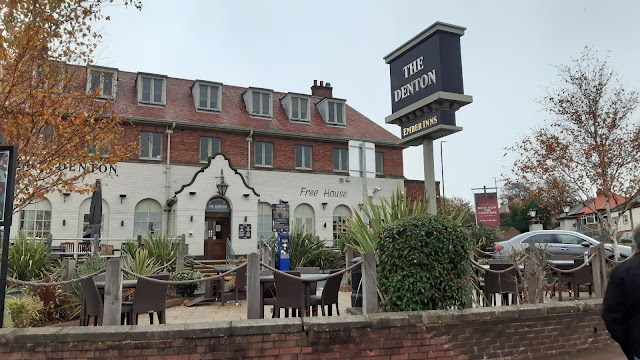 And so we ended up in 'The Denton' on the West Road for a few gargels instead, before catchin the bus back to The Toon!

A canny day indeed!---in total contrast to The Toon's game at Wolves the next day (Match report on that game below!) 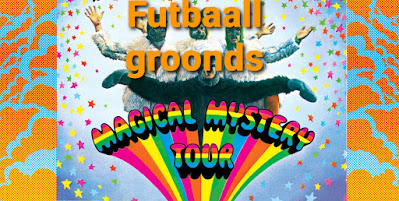 Posted by fink the mad-sad groundhopper at 19:30