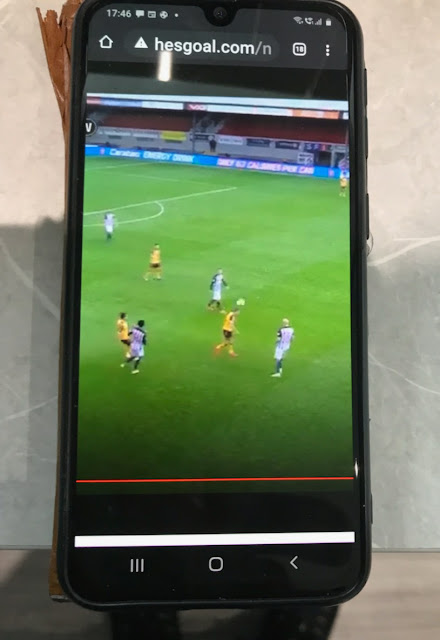 *Havin' been to every competitive Toon game in a 25 year period and doin 1,201 games in a row, that run came to an abrupt end, becoz of the 'bat out of hell' pandemic, when we played Sheff United at SJP behind closed doors last Joon!

In total contrast and since then, I will have missed 25 games in a row after we play Leeedz tooneet (With nee fans allowed in, of course!)

Since then I have 'Tellyhopped' and watched or hord NUFC in various locations, from pub big screens,(when the pubs are open!), the grandbairns hoose TV, mee mates hoose TV and in wor hoose, on a dodgy channel on mee laptop and mobile telling' bone!----and av even listened to one on mee van's radio!(on mee drive!) (I don't have Sky etc!)

Of course aall NUFC fans are in 'the same boat az me' and with the Tier 3 restrictions still in place, it looks like we will be 'tellyhoppin' for some time to come!

The virus haz of course struck wor team and several players and staff have been very ill with it, includin' Isaac Hayden who spent TEN days in bed with it!!! (We wish them aall a very speedy recovery!)

While Hayden haz recovered and played against WBA last Saturday, 2 unnamed players are reported to be very unwell! 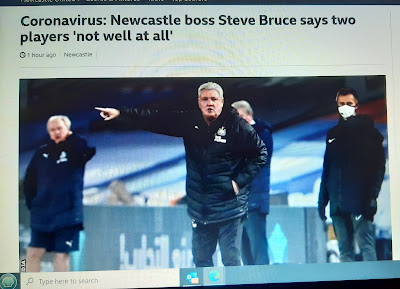 We will be depleated again tooneet and we will have a clue an hour before the '6:00 bells' kick off just who iz fit and available?

The sooner the 'miracle' vaccine haz been rolled oot and virus iz hopefully gone, then things can get back to some form on normality, when the pubs and tornstiles reopen, with 52,000 screamin' (drunken!) Geordies inside SJP!

A full Geordie Times match report will appear here sometime later, after watchin' the game yet again on mee laptop! (That shud read 'tryin to watch', az the picture will probably freeze a few times!)

Oh to gan to an away game again and be back into mee seat in row 'B', seat '97' of The Milburn Stand balcony for home games!

PS: Boris will announce this afternoon wot 'Tier' we will be in---we fully expect that we will remain in 'Tier 3' (ie: nee pubs open, nee fans at SJP!)

We will of course tell yoo the answer later!

Posted by fink the mad-sad groundhopper at 12:11