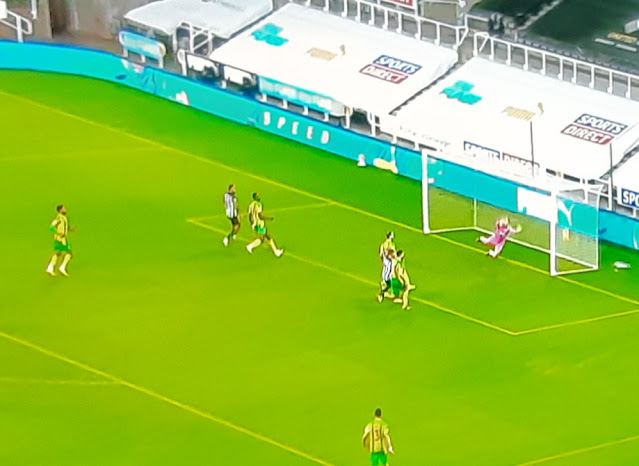 THE WINNIN GOAL SCORED BY SUPER SUB DWIGHT GAYLE!
(On centre of the 6 yard line)
COVID 19 (SECONDS!)
It took The Toon just 19 seconds from kick off to open the scorin at The Leazes End when a through baall from Joelinton foond Almiron and he rifled a shot into the corner of the net with the West Brom keeper well beaten! (see photos below) 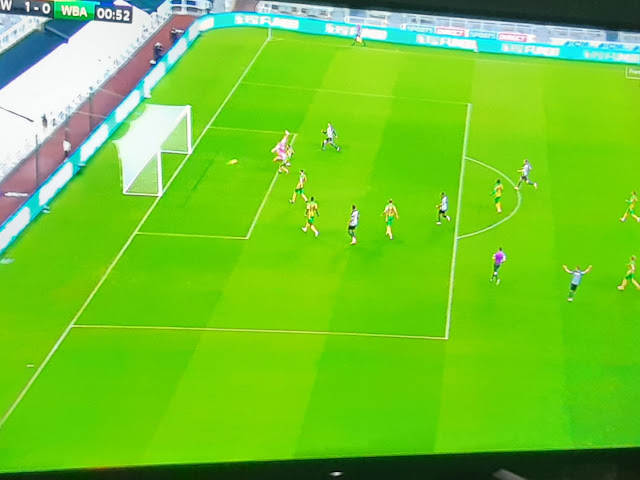 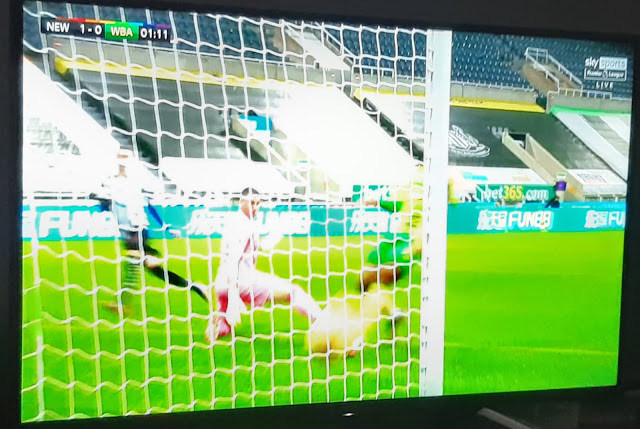 ALMIRON'S GOAL FROM 2 TELLY ANGLES
(The fastest goal in the Premyaa Leegue this season!)
"VIRUS VICTORY!"

That this game woz takin place at aall woz a suprize to many, as the NUFCs trainin groond in Benton had been forced to close because of the covid 19 outbreak, which forced the postponement of the Villa game last week!

Wor manager 'Broken Nose Bruce' had said that many 1st teamers would be missin because of this and that the game could be postponed!

However!---az it turns oot, 8 players who had played at Pallis a fortneet orlier WERE available and therefore the game could bee played!

A cunning ploy by Bruce to fool the opposition  into believing that several players from wor U23s team would be drafted into the starting 11! 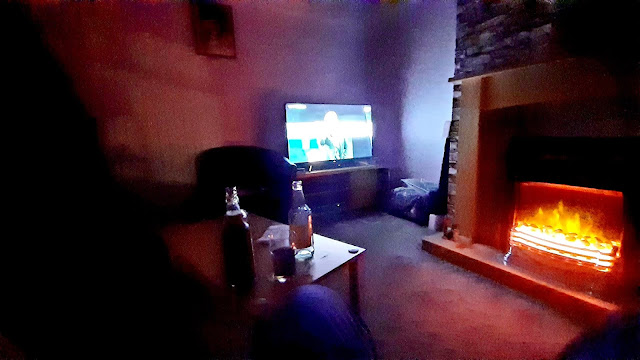 THE BROON ALE WOZ READY FOR THE KICK OFF IN FRONT OF A ROARIN FIRE!
(Tex Taylor's hoose)

The orly goal for us didn't make us gan for 'the jugular' and we paid the price for not killin the game off, when West Brom equalised in the 5th minute of the 2nd half with a fine strike by Furlong!

At this point it looked like that sits 2nd bottom of the table would get a 2nd goal, but we stuck in and defended stoically!

Then the ace card woz played by 'Old Broken Nose'--he sent Dwight Gayle on in the 69th minute and straight away he had a heeder on target, which woz cleared off the line by a *Baggie Troosers defender!

And then just a few minutes after this, a pinpoint cross from Murphy foond Gayle's heed and he connected 'with perfect precision' to send the baall into the top corner of the goal at The Gallowgate End in the 80th minute!

An absolutely fabulous goal in this dour game in front of nee fans of course, coz we are in Tier 3! (The sooner we can gan back, the better---There iz nee fun havin to watch The Toon on a telly in somebody's hoose----even the pubs are shut up here!)

This goal killed the game off and we secured the 3 valuable points to send us up to 11th place in the table! (For the time being at least!)

To be clear, apart from the 3 great goals, (aye! Furlong's goal for WBA woz a canny strike az well!) there wasnt much else to shout aboot, az the 2 team battled it oot in the rain 5 miles west from where we were watchin', in Howdon-on-Tyne! 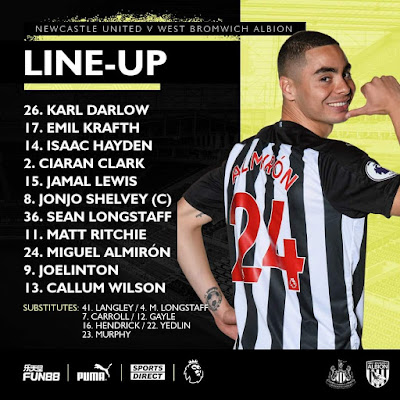 *Official attendance in Tex Taylor's hoose: 2!
*Explanation: We caall West Brom 'The Baggie Troosers' az their nickname iz 'The Baggies' coz they used to wear 'baggie' shorts in the 19th century!
Posted by fink the mad-sad groundhopper at 12:00