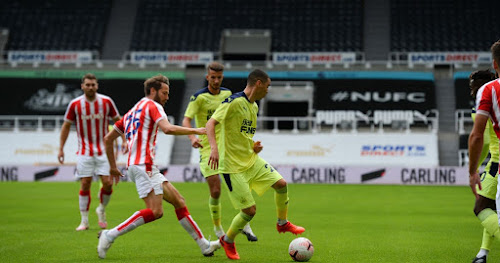 For the 2nd time in a week NUFC lost to a Championship team who were fightin relegation to the 3rd tier last season, when we went doon 1-0 to Stoke at a deserted St. James' Park yesterday afternooon!

With "3 irons in the fire!", 'Broken Nose Bruce' needs to get hiz finger oot sharpish to sign them, or else wor fate will be yet anothaa relegation battle!

Of course we wornt there, and have to take reports from elsewhere to write this piece!---Othaa clubs provided 'live streams' to their fans while wors posted  a handful of video clips!!! ("Wow!")

By aall accounts we didnt play well (again!) and wor visitors took the lead in the 19th minute when Tommy Smith centred across the box for Clucas to heed home past Darlo in The Toon goal!

It woz a dreadful game and it petered oot with nee sign of us scorin' and The P*ss Potters held on to "take the p*ss!" and win the game!

After the game Bruce said: "The good part today is we picked up no injuries!"  (7 players are 'crocked' and couldnt play!)

Good old 'Broken Nose', aalways looks on the positive side!

Just SIX days to gan til the big opener away to 'The Jellied Eels Mob' of West Ham in east London, which of course iz behind closed doors, with NEE telly coverage to watch from wor homes, bars and clubs!

PS: Because we couldnt watch The Toon at home we ended up at Heaton Stannington in the east end of the Toon to watch their game v Carlisle City in The Northern Leegue!

A match report on THAT game will appear here later today!

The draw for the 2nd AND 3rd roond of The Leegue Cup takes place at 2:00 bells' this afternooon and iz live on Sky Sports!

Teams to avoid include Newport, Fleetwood and Northampton away, az we have never been to those groonds to watch The Toon and az the games are behind closed doors we wouldnt be able to gan (In my case the last time aa missed a competitive game on a new groond woz 41 years ago!)

Posted by fink the mad-sad groundhopper at 10:44