The Toon's *inaugural trip to The Globe Arena (*we naa aall the posh words!) torned oot to be an iconic day in wor lang history az two brothers scored in the same match for us for the forst time ever!

It started off badly az we got stuck in a massive traffic jam in Lancaster, which iz the next toon to Morecambe and it took ages to get through the place!
Then!---there waz the little matter of findin' a safe place to park mee new blue van (complete with 'The Geordie Times' Tyne bridges logo!) which had been convorted to carry passengers in the back!
The run-doon hoosin' estate next to the ground looked very dodgy indeed with old settees and mattresses lyin' discarded in weed strewn gardens and so we decided to try and park in one of the many caravan parks in the area, which we told were safe to park in.
'Tex' Taylor, one of mee travellin' companions had stopped at one a few years back and we heeded for that one, where the wifey who owned it said we could park next to a shabby white camper van for 'a fiver'!

Aa carefully reversed the van on to a piece of grass next to the camper and aall of a sudden the camper's door flew open and a scruffy lookin' unshaven skinny gadgie wearin' a beer stained white vest appeared, wavin' hiz arms aboot like 'windmills' and demandin' that we moved it 'pronto' az that waz hiz bit of lawn and we were blockin' hiz view! (of a gasometer, by the way!)

He suggested (demanded!) that we moved it to some hard standin' on the next plot which waz empty and so aa 'gingerly' shifted the van to where he said! (we had left some 'tyre tracks' on hiz precious lawn, which he hadn't noticed, but decided not to tell him az we might have slashed tyres and nee van windows left, when we returned from the match!)

It waz then off to 'The Hurley Flyer' boozer next to the ground az the gadgie stared at us through hiz net curtains! 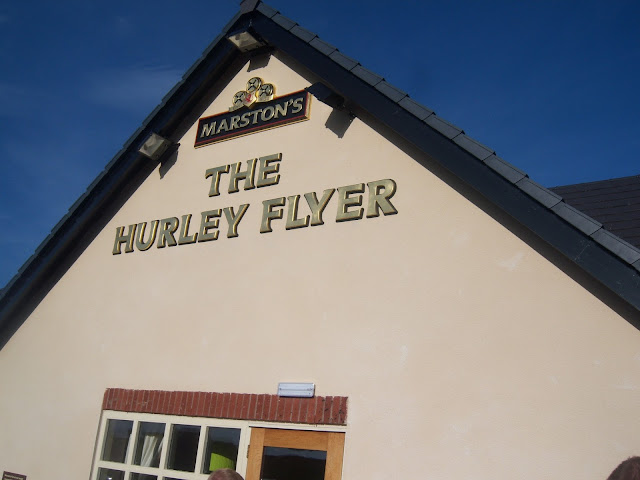 Some Toon idiot set a smoke bomb off in the beer garden and the smoke drifted into the bar where we were and so we decided to gan to the bar in the caravan park where we had just left!

It waz then onward back to the tiny ground where Toon fans occupied half of the main stand (where we were) and the terrace behind the right hand goal from us.

A mainly resorve team trotted oot and we just knew that we would be in for a hard neet in this Leegue Cup 2nd roond tie!
If it wasn't for defender Dan Gosling and goalie Rob Elliot who both had blinders we would surely have lost this game az Morecambe had THREE clear cut chances to take the lead in the forst half, but we were saved by 'the dynamic duo'!

Another 'dynamic duo' came to the rescue in the 2nd period, just when it looked az though the game would gan to extra time.
Shola Ameobi raced through the home defence and fired in a shot which waz deflected and it ended up in the corner of the goal in the 84th minute to wild celebrations from the Toon faithful who were behind!
Not to be ootdone, hiz bruvva Sammy fired home deep into injury time to seal the victory and a coverted place in wor 121 year history! <(not anly that!, but two born and bred Geordies az well--"Whey aye maan!")
﻿﻿﻿
﻿
Thankfully!--the windows (and tyres!) were still intact az we returned to the van (the gadgie had gone to 'beddy-byes' by this time!) and we quietly drove off (so az not to distorb him!) into another traffic jam on the main road!

The draw for the next roond waz on the radio and a home tie against Leeds waz wor 'prize' for gettin' through!

Posted by fink the mad-sad groundhopper at 08:00