*The Premyaa Leegue are havin a meetin on Friday (by video) in a desperate bid to restart the season in the middle of Joon and the plan iz to finish the 92 games to be played by the end of July! 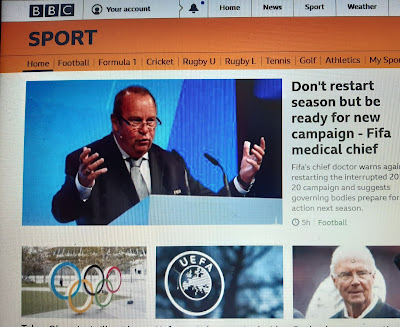 However!---many teams are unhappy aboot givin' up home advantage, even though the groonds will be empty apart from 300 staff, tv crews etc. needed to stage the games!

FIFA have stepped in and said that nee games should be considered til September at the orliest--and UEFA have given European leegue til May 25th to come up with a plan to complete the season!

Holland and France have both admitted defeat and have voided their seasons aalready, while Scotland are expected to dee the same!
Jawmany's cash strapped Bundesliga are desperate to restart next month, but it could by blocked by Jawman chancellor Angela Merkel!

It aall boils doon to TV money at the end of the day of course--and the thought of havin to watch 'The Toon' live in mee own livin room, in front of 52,000 empty seats, fills me with dread!

Will the season be completed?---who knows?---who cares? when there are still hundreds of people dying every single day!

It will be a logistical nightmare and should just ONE player get 'the bat out of hell' virus, then the whole thing will unravel for certain! 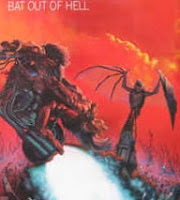 A better idea would be to end the season now and continue in September, like FIFA says, when hopefully the crisis iz ower!----and finish the season in November---have the winter break in December---and play the next season from January 2021 til say October 2021 (With a break for the rescheduled European Championships in Joon)

Then have 2 months off from November and December---And then anothaa season exclusively in 2022, with The World Cup in Qatar at the end of that year!

We shall soon find oot wot exactly WILL happen!--- 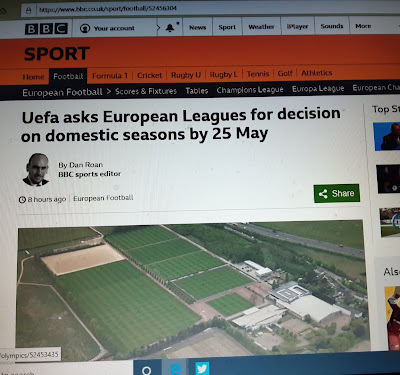 *
Posted by fink the mad-sad groundhopper at 12:23