“The never endin’ ‘Toonhop Tour’ continued at Man U’s latest resorve venue at the new home of Northwich Victoria, where the Toon’s second string were playin’ and the anly reason we were here of course was because it was a NEW GROOOND to add to ‘the list’!----reeed on!”

‘The Caped Crusader’s’ silver ‘bat mobile’ was (again) wor mode of transport for this game in Cheshire against Man U’s ‘second string’ at non league Northwich Victoria. The usual ‘culprits’ of course were on board, namly, ‘Biffa the Beer’, ‘Glennn from Ashington’ and meesel!

The day before, the forst team had got a credible home draa against Arsenal and Biffa had been dein’ a book signin’ session for his new book in ‘The Back Page’ bookshop in St Andrews Street and aa have ti tell yiz that the queues stretched aall the way doon the street!

However!---The anly problem for ‘Biffa’ was that the ‘queues’ a’m taalkin’ aboot were for the ‘X31’ bus to Waallsend and beyond and not! for signed copies of his  new book! (Stick to the 'day job, mate!)

ANYWAY! ---The weather was OK when we forst set off, but by the time we hit the ‘M6’ torrential rain was buffetin’ ‘the bat mobile’ as we sped through the spray.

The forecast for the Cheshire area was’nt ower clever and when we arrived some three hours after leavin’ ‘sunny’ Tyneside the ‘Michael Caine’ was comin’ doon in buckets! 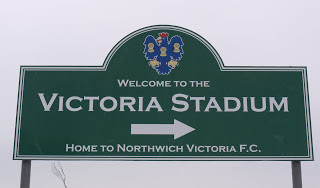 After collectin’ some team sheets from the main reception we made for the dry sanctuary of the Northwich Victoria clubhoose next door, which is built underneath the main stand.

The groond is one of them brand newins built in the ‘back of beyond’, or in this case a place caalled Lostock and there was absolutleee nowt there apart from the ‘said’ groond----ie----not a boozer within a mile!

The clubhoose roof is made of slopin’ glass panels and of course it was still ‘lashin it doon’ as the rain cascaded doon the glass roof like a huge waaterfaall!

Anyway!---‘the soaken saddos’ (us!) were soon joined by ‘Dave from York’ who had travelled across country by train and he was like a drooned rat as he waalked through the door!

We were getting’ a bit worried aboot the match bein’ caalled off by this time, as apart from us, there were anly five others in the bar, three Man U gloryhunters with two sprogs in tow! And as we sat in the bar watchin’ the ‘waaterfaall’ as we supped wor ale, wor worst fears were conformed precisely one hour and five mins before kick off when a gadgie came ower and telt us the devestatin’ but predictable bad news----“IT’S OFF!”, he said as we looked bewilderedly at each other!

(Five minutes later the Toon team bus torned up, so it was’nt just us who had made the wasted ‘rain-lashed’ journey)

‘Glennn from Ashington’ decided to heed for the main reception once again to see if he could get a few more teamsheets. He returned to the clubhouse five mins later clutchin’ Sir Bobby Charlton’s executive match ticket which the lassie in reception had given him as a souvenir!

(quite appropriate as Bobby of course comes from Ashington, like Glennn!)

“There’s loads more roond there!”, he said as he waved his ‘prized possession in the air!

As anybody who naaz me naaz!, aa save match tickets as well and aa made a ‘beeline’ for reception (but not! before gulpin’ doon mee pint of ‘extraa smoooth’!)

The lassie rummaged through a pile of letters and gave iz what she led me to believe was another ‘famous face’!

“Who the hell’s he---like!?”, aa said as aa looked puzzilingleee at the match ticket!

“He’s the club chaplain!”, said the lassie behind the reception desk in a surprised voice (as if everyboby should naa??)

So there we have it!---Glennn got Sir Bobby’s ticket and aa got ‘Charlie’ Chaplain’s!

(although, aa divvint think it was the same one from the ‘silent movies’!?)

Anyway!---Glennn refused point blank to swap me tickets (selfish B*****D!) and we returned to ‘the bat mobile’ for the near 200 mile journey yem! (to say that we were ‘pist off’ would be the understatement of the year so far!)

A wasted journey?----YES!----but at least it gave us sommik to taalk aboot as we sped back ower the Pennines past the ‘M62’ farmhoose!

“THE VICTORIA FALL OUT!” 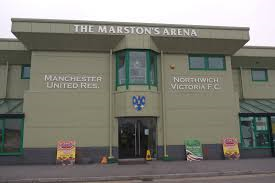 *NO!---it izzint a misprint!—but since we were last here some sixteen weeks orlier, they’d actually changed the name of the groond from ‘Victoria Stadium’ to ‘Marston’s Arena’!

One notable absentee was ‘Biffa’ who had booked a pre arranged holiday with their lass in Barcelona, which meant that anly three of us had travelled doon this time, in ‘The Caped Crusaders’ ‘bat-mobile’

Nuw!--- tek a laaaang hard look in the mirror and ask yourself a serious question!----------would yi!------ rather be sunnin’ yoursel in one of the beach bars in the Catalan cultural capital, watchin’ some beautiful blonde bimbo in a ‘topless peeece’ waalk by, as you sup an ice cold lager from a ‘San Maguel’ crested glass-----OR!-----would yi!----- rather be suppin’ a waatered doon luke waam Bovril from a ‘Northwich Victoria’ crested plastic cup instead, as you watch the ‘fall out’ from the toxic smoke as it bellows skyward from the nearby ‘Victoria Chemical Works’,  (or whatever it’s caalled!?) as you freeze to death on the ‘sun-less’ terraces??? (at least it was’nt ‘chuckin’ it doon’ this time!)

If the answer to the above question is the latter, then you are in serious need of psychiatric help and aa naa  this very good psychiatrist who will be able to offer you!--------absolootlee ne help whatsoever! (ie: there’s definateleee ‘ne hope’ for you at aall!)

Anyway!----soon we were joined by ‘Dave from York’, who again had made the jorney by train and ‘The Toon’ started off brightly as they kicked towards the ‘Chemical Plant End’ as the darkness drew in.

In complete contrast the opposite end had a row of ‘very nice’ conifers trees linin’ the ‘one step’ terraces, behind which the Toon’s team bus was parked.

Opposite to where we were standin’ was the main stand and directly behind it in the distance aboot fower miles away was another chemical plant, spewin’ oot it’s bronchitis guaranteed smog  and as the ‘current bun’ made it’s exit ower the horizon, an orange ‘glow’ lit up the black sky as the teams ran oot for the ‘seven bells’ kick off!  (is this smogland in disguise?)

‘The Toon’s second string were by far the better side durin’ the forst exchanges, but we had

to wait til 12 mins before the break before  the deadlock was finally broken, when a sliced shot from Toon’s  James Marwood foond Jonny Godsmark and he slotted the baall past the Man U keeper, who’d been wrong footed by Marwood’s wayward effort and we went in at the break one-nil up.

Me and ‘Glennn from Ashington’ worked oot that wor total was ten and ‘The Caped Crusader’ came in last with a ‘mere’ nine (bloody part-timer!)

Anyway!---enough of that sadness!---In the second half ‘The Toon’ kicked towards ‘The Conifer Tree End’ (it had to be!) but it was the home side who came to life with three goals in a five minute period of mad Toon defendin’ just after the restart, to knock the stuffin’ oot of wor second string. The game fizzled oot after this and there were ne more goals or incidents of note and in the end we were well beaten and so ‘it came to pass’ that the ‘crestfallen four’ filed dejectedly oot of the groond and heeded back home past the M62 farmhoose once again!

So there we have it!----after two roond trips to Cheshire in which we’d clocked up a staggerin’ 750 miles (plus!), we could finally say that we had completed ‘the set’, as we’d previously visited aall the other groonds that mek up ‘The Premier Reserve League North’------nuw wots that psychiatrist’s number again? ??

‘A’ to ‘Z’ Geordie Glossary of Terms and Phrases

(For the benefit of ‘non Geordie’ readers)

M62 farmhoose=farmhouse surrounded by the M62 motorway (the farmer would’nt move when they built the motorway, so they built it around his farm!----Honest!)

Posted by fink the mad-sad groundhopper at 12:49