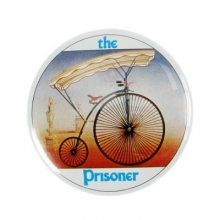 
Aa had ti gan to this one of course as it was a brand new groond and aad arranged at work to get a very orly start that day so that aa had plenty of time to mek the match.


So!---it was oot of bed at three in the morn’ and off  ‘truckin’ to Mansfield for Allied Bakeries.


A three bells afternoon finish meant aa had plenty of time to get yem for a wash ‘n’ brush up and a bit scran before cadgin’ a lift off ‘The Caped Crusader’ to deepest Northumberland.


Unlike Ashington’s aad grooond which was near the toon centre, this one is in the middle of ne where, next to a dodgy lookin’ hoosin’ estate and this was conformed when we got to the clubhoose entrance at the groond, as it was like ‘Fort Knox’ to get into.


Metal roller shutters were on the windows and doors and just to mek sure that nebody could get past this, they had iron bars on the doors as well!


We got there just as an aad wifey was openin’ up (good timin’ pet!) and downed the forst ‘liquid refreshments’ at ‘five thorty bells’ preciseleee! (‘seven bells’ kick off)


This torned oot to be the forst ‘outin’ of the Toon’s new horrendous ‘Whitley Bay deckchair stripes’ away strip, which would’nt have looked oot of place on the set of the cult TV series, ‘The Prisoner’!


(‘Glennn from Ashington’ was one of  the above posers, although he insisted that his expensive designer ‘shades’ were in fact from Poondstrecher!) (Er!---anly jokin’ mate!)


The same ‘saddos’ were there of course who had been in Ireland fower days before for the Shamrock game and they were aall huddled together takin notes of just who was actually playin’!, namly, “zzzzzzz!”, ‘Dave from York’, his ‘sidekick’ Alex, ‘The Bear’, ‘Byzee’, Glennn and of course ‘The Caped Crusader’. (aalso present was ‘The Mad Professor’ who could’nt be bothered to gan to Ireland (part time sad b******!)


Just like the fans, ‘The Pit Yakkers X1’ were aalso ‘dazzled’ by wor new ‘Prisoner strip’ (as it was now appropriateleee christened !) as we took the lead with bearly two mins on the clock, when Zambiera (‘Zam Man’) flicked the baall into the path of Baheng who coolly slotted home.


However!---the lead did’nt last lang and the home side levelled  when Frazer Forster in the Toon goal fumbled a cross and Ashington’s Keith Douglas took advantage with an unstoppable shot into the reet hand corner of the net!


There was applause of course for the home sides goal, but sadly there was ne sign of the Ashington drummer alang his ten strong entourage to ‘wind up’ the crowd into a ‘frenzy’ like they had at their aad groond, where they used to sing, “Jackie Milburn’s black ‘n’ white army!” , alang with otha ‘ditty’s’


And the fact that there is ne bus service from the toon centre to the groond eetha ,does’nt help! , so mebeez they just decided that it was too far to waalk and packed in gannin’!?


It was 2-1 to the Toon just before the break when ‘Zam Man’ fired in from close range from a Baheng cross and then it was a ‘mad rush’ to the bar as the ref blew for half time.


(Unfortuanetleee!---the bar was ‘heavin’ and aa estimated that it would tek at least twenty mins to get sorved, so aa ‘abandoned’ that ‘plan’ and went for a ‘scabby eye’ instead!)


Ten  mins into the second period the ‘Pit Yakkers’ again drew level after another error in the Toon’s defence by sub Sammy Amiobi (yee naa who’s bruvva!) but! he made amends for his ‘mistayke’ when he drove home the winnin’ goal with a fine left footer strike, mid-way through the half !


After the match we made for the car and amazingly it still had aall it’s wheels on? and had’nt been ‘torched’!? (Er!---mebeez they are’nt that bad roond theeze parts after aall!?) and aa arrived yem just in time for mee ‘cow pie supper’ which wor lass had just made!----“Yum yum!”

Posted by fink the mad-sad groundhopper at 13:36