Fower of us 'were sent to Coventry' in ‘The Caped Crusaders’ ‘bat mobile’ and we arrived at the groond (sorry!-- ARENA!) which woz smack bang in the middle of  an industrial estate on the ootskirts of the city centre, in plenty of time for the forst ‘gargels’!


We eventually foond a bar in a hoozin' estate half a mile away up the road called ‘The Hub’ and settled doon for ‘the duration az there were nee othaa bars in sight!


Apart from ‘me’ and The Caped Crusader, Jonezee and ‘Grumpy Stumpy’ were in attendance az we hoyed the ‘gargel’ doon wor ‘Gregory Pecks’ (necks!) 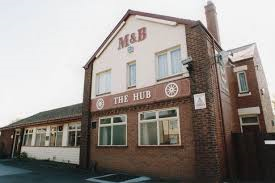 While me and Jonezee drank the local brew, Grumpy Stumpy went on the scrumpy and The Caped Crusader kept to soft drinks az he woz drivin’!


It woz then time to heed for the tornstiles of this brand new ground and on enterin’ we could see that it woz half empty with thoosands of sky blue seats vacant in the home sections! (13,000 to be exact!)


The Toon section woz canny full az the game kicked off and we went on the attack straight away!


It took us 21 minutes to oen the scorin’ when N’Zogbia fired home a James Milner cross!


17minutes later and anothaa cross from Milner woz missed by everybody, includin’ their goalie and it sailed into the net after takin a slight deflection off a Coventry defender! 2-0

The Sky Blues pulled one back deep into forst half stoppage time after indecision in the Toon defence!


The game petered oot and deep into injury time, az we made wor way to the exits for a quick getaway, disaster struck, when a lang throw in near wor corner flag from a Coventry defender, foond the heed of Dann, who nodded the baall into the top of the net!


Anyway!--- in the 97th minute we got a 3rd goal, when a superb baall from Enrique foond Michael Owen (who had come on az a 2nd half sub)and he lobbed the Coventry keeper to eventually win the tie! (see top photo)
But not after some finger bitin' in the last few minutes to avoid a dreaded penalty shoot out! 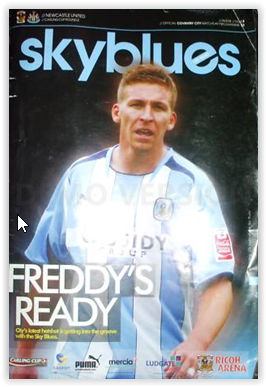 Aa got yem in the orly hours and then had to drag mee lifeless body oot of bed at ‘6am bells’ to de a ‘truck run’ to Glasgow!


Footnote: Sadly both 'Jonezee' and 'The Caped Crusader' (who woz better known az 'The Undertaker') are no longer with us!


RIP lads!
Posted by fink the mad-sad groundhopper at 16:00