(plus many more watchin’ from their train seats as they whizzed past!) 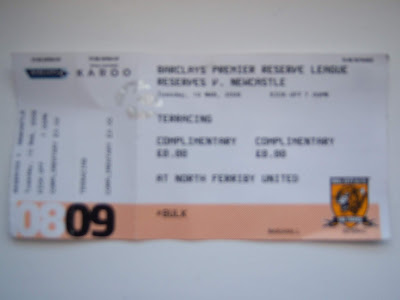 A full car load of us heeded to Humberside at ‘3:30 bells’ includin’ aall the usual saddos, namly , ‘The Mad Professor’, ‘The Bear’, ‘The Caped Crusader’ and ‘The mad-sad groundhopper’ (aka: ME!) 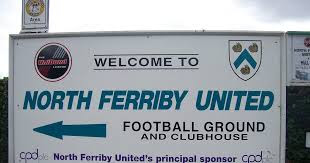 Two and a half hours later we arrived in the picturesque village of North Ferriby where Hull resorves are playin’ this season and we parked up next to the local church and heeded for the groond which was on a lane just behind it.


The gate was open to the groond and we simply waalked in withoot payin’ as they must of thought we were Hull season ticket holders.


As a’v mentioned many many times before, aa collect match tickets from groonds a’ve been te and ‘Glennn from Ashington’ and his side kick ‘Byzy’ who had travelled doon by train were sittin’, suppin’ pints of the local brew with ‘Dave from York’ as we waalked in.


Straight away and nearly ‘bustin a gut’ (and before aa even had time to sit doon!) Glennn telt iz that they’d cadged two tickets from a gadgie in the boardroom, as they aalso collect match tickets


“The boardrooms just there!”, said Glennn pointin’ towards an open door where aa could see some aad gadgies in club ties drinkin’  G and T’s and glasses of whisky,.


”Why divvint you ask one of them for a ticket like we did?”, he added


But aa decided to ‘sit tight’ and wait for an opportunity as board members were gannin  back and forth between the boardroom and the bar for their liquid fixes.


“You don’t need a ticket to get out of the bar and into the ground!” he said with a puzzled look, not understandin’ wot aa actually meant!  before waalkin’ off towards the bar coonta  for some more ‘tonsil lubrication’ (neva mind aa can aalways try again later---aa thought?)


It was nuw time to make for the terraces and the Toon ran oot in their ‘porple people eater’ away strip as the full moon shone brightly above the huge Humber Bridge in the distance behind the left hand goal from us. The bridge is so big that they had to allow for the curvature of the Earth when they built it!


In complete contrast to the ‘big bridge’, behind the other goal there was a row of ram-shackle allotment gardens and greenhooses that looked ready to fall doon at any moment and opposite us was the main railway line from Hull to York (and beyond!) where trains were whizzin’ past every couple of minutes.


The match got underway and The Toon kicked towards ‘The Allotment End’ as the darkness drew in but both teams were unable to break the others defence doon although to be fair to ‘The Toon’ Nile Ranger did have a couple of shots on target and captain Ryan Donaldson had an effort deflected for a corner, but that’s as ‘good as it got’ in an awful forst which ended goaless.


(it was SO bad that half the time we were watchin’ the trains gan past on the far side and guessin’ how many people were on board as they flew past !)


As the half time whistle blew aa noticed a Hull fan hoy wot looked like a match ticket into a litter bin beside the clubhoose entrance---and so! (az yi de!) aa had a quick ‘shufty’  in the bin as aa waalked past. My ‘exitement’ however! quickly evaporated  as aall aa could see was a discarded carton of mushy peas, a broken plastic fork and a half eaten mince and onion pie!----but NE match ticket! (memo:---must get mee eyesight checked!)


It was time to heed for the bar once again for a quick ‘gargel’  and to try and find that elusive ticket.  Inside the clubhoose a teenage fan dressed in a Hull top was standin’  with his mate at the coonta and in desperation aa gingerly asked him if he had a ticket aa could have.


Yes he had! and he gave me the ticket which aa gleefully excepted, as it was ne use to him (his words not mine!)  BINGO!  (shy bairns get nowt!)


His mate aalso produced a ticket and gave it to me (hand shakes aall roond!)


(Is it Xmas time aalready?)


It was then back to the terraces where aa presented ‘Dave from York’ with the other ticket (aye!---he’s another ‘sad ticketeer’ !) and then ‘seek oot’ Glennn and Byzy!


It was my torn to ‘gloat’ as aa produced the worthless piece of paper from mee ‘sky rocket’ and showed it to ‘The Ashington Antagonists’.


Byzy’s ‘Cheshire cat grin’ then suddenly evaporated to be replaced by a ‘Winston bulldog scowl’ as aa thrust MY prized ticket in front of HIS bugle!


(Er!---it shud be noted that Dave got a very creased ticket which the other lad had given me----beggars can’t be choosers!)


Just after this the deadlock was broken in wor favour at the!---- ‘Very Big Bridge End’ (yi just knew it was comin’---did’nt you!?) when a Mark Doninger shot took a wicked deflection off an unfortunate Hull defender to leave their keeper stranded as the baall flew helplessleee past him into the net.


This sparked ‘wild’ celebrations from the 50 or so Toon fans dotted aroond the groond (whey!---polite applause, anyway!)


Thorty seconds later another train flew past and ‘Dave from York’ (forever the diligent observer!) noticed that there was absolutely nebody on board whatsoever!, not even a driver! (a ghost train, perhaps!?)


The full moon which had been ‘hidin’ behind some dark clouds for a while then suddenly made a reappearance ower the railway line.


It was at this point that aa half expected a howlin’ werewolf to appear, it was that spooky!  Aaltogether now!--- “AAAAOOOOOOOOOOHHH!”


We held onto the lead til 3 mins into injury time when Hull equalized with a last gasp shot which Toon goalie Frazer Forster  failed to stop and just after this the ref blew for time----a cruel end to the game for us!


It was then time to heed back alang the M62 past Ferrybridge power station, but it would’nt be tooo lang before we were back in this neck of the woods again as wor next trip to Humberside was just fower days later to watch ‘The Toon’ in a Premier League match at Hull’s  KC Stadium.


PS: In 2015 Wrexham played North Ferriby in the FA Trophy final at Wembley.
The game woz on the telly in a bar and someone asked me the deadly question:
"Fink!" he said, "I know that you'll have been to Wrexham to watch The Toon
But I bet you've never been to North Ferriby!"
"WELL, ACTUALLY!", I replied!
(North Ferriby won!)

Posted by fink the mad-sad groundhopper at 13:47