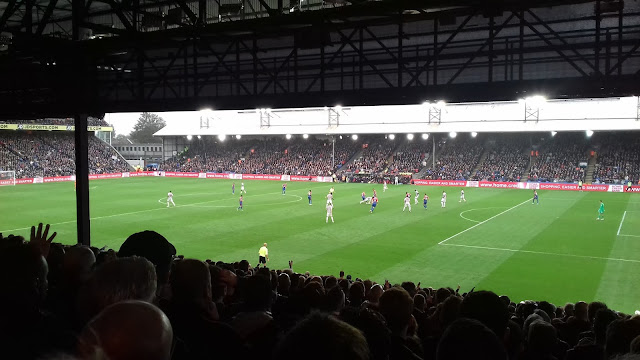 The '7:27am bells' jorney doon from 'The Central' woz uneventful and we arrived at wor destination 4 hours later---The Portland Arms boozer, which woz a 25 minute waalk from the groond. 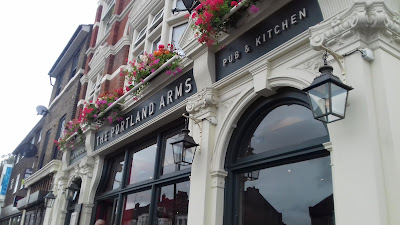 Az it woz quiet and fairly cheap by London standards (£4:10 a pint), we decided to stop there for 'the duration' and after several liquid lubrications we heeded to the nearest bus stop az it woz 'chuckin it doon' by this time and we didn't want to get soaked!

We waited ages for the bus and it eventually torned up, but didnt gan past Palace's groond az advertised, so we still had a canny hike to get there when we alighted (we naa aall the big words!) so we still got soaked!

Anyway! We entered the away end and aa hord one of fans say that The Fat Controller woz there, which sent the Toon contingent into chants against him az the game kicked off!
The chanting woz loud and ear-piercing!

The game, predicably woz borin to say the least az both teams struggled to put 2 passes together az Rondon and Shelvey made an appearance at last!

The view from row 33 woz terrible and we couldnt see the far corner of the pitch az the rake of the terracin iz too shallow! (And I'm 6 foot taall!) ---the worst groond in the Premyaa Leegue for viewin--for certain!

The forst half ended 0-0 az both sides will surely be in 'the mire' with performances like this! "ZZZZZzzzzz!"😴

Rondon didnt reappear for the 2nd half with Joselu replacin him, az we again struggled to produce anything positive!

It woz the 'same old'-'same old' story though, az we watched on!
20 odd years ago we were known az 'The Entertainers', now we are the exact opposite!---'The Untertainers'!😨

The chantin against wor beloved owner? then got nastier and more poisonous, when some fans chanted that they wished that he woz dead!

We survived a couple of eazy chances in the 2nd half, but we would have been unlucky to concede at this point!

A bottle woz aalso thrown onto the pitch near the end by one of wor idiots, which hit one of their players az the game petered oot into a torturous goal-less draw!

Amazingly we climbed one place up the table to 18th, but we will have to do much better to climb higher!

Anothaa one to forget I'm afraid and we got drenched in the pourin rain on wor way back to Selhurst train station! 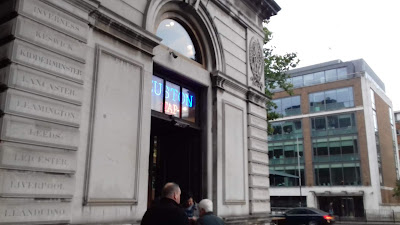 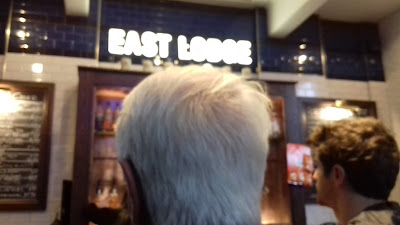 A few gargels in Euston after the game followed, before we caught the '8 bells' train from King's Cross.
in total 3 boozers were visited on wor '100 away pub crawl challenge' (this will be updated soon!) 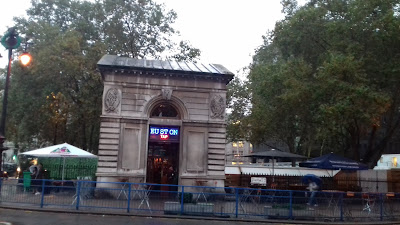 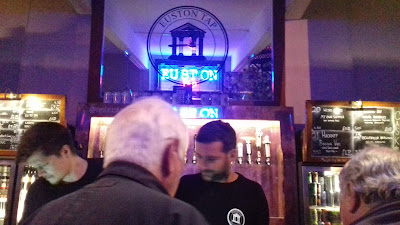 
It woz due back at 'The Central' at '11:04 bells' but woz 28 minutes late, which meant aa missed mee last bus yem and had to flag a taxi doon at an extra cost of £10!--just to round off anothaa torturous and 'untertainin'  away trip! (If the train had been 30 mins late I would have got half mee money back on the ticket!--- sods law!😨)

Team line up and more pix to follow later az a'm off on 'the hoy' in the next few minutes! 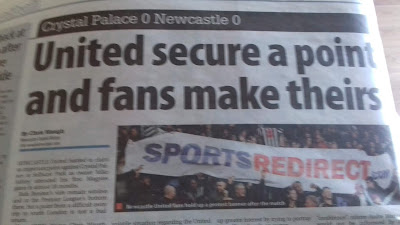 From The Sunday Sun
'The Fat Controller' iz left in
no doubt wot the fans 'fink'!

Posted by fink the mad-sad groundhopper at 10:54