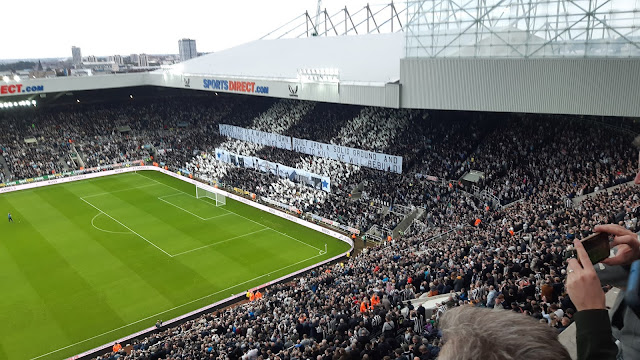 "THE RIVER (TYNE) WILL RISE AGAIN!"

Wot a day of mixed emotions!----The build up to the game woz electric and we arrived at the groond more than an hour before kick off, which iz nearly an hour earlier than we normally dee! 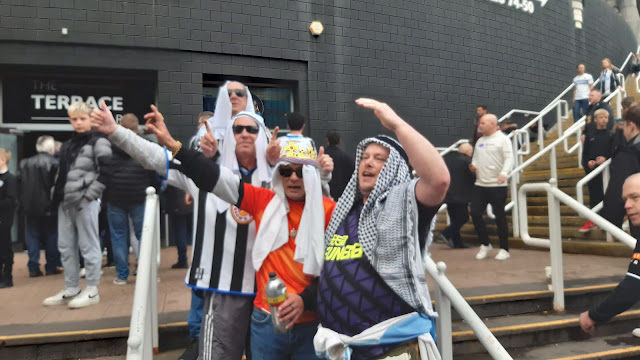 Fans dressed in Arabian garb were 'a plenty' az we approached the entrance to The Milburn Stand and were aall in happy mode az the game neared the '4:30 bells' kick off!

Wor new owner woz introduced to the crowd az 'BIG RIVER' woz played at full blast ower the loudspeakers, with fans in The Gallowgate End raisin a banner with the lyrics to the song, sung by Jimmy Nail! 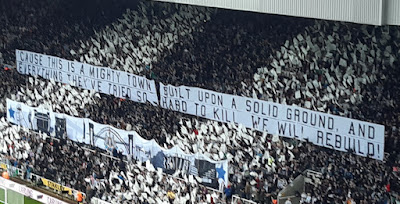 The welcome woz thunderous and so woz the kick off when with just 2 minutes on the clock Callum Wilson's divin heeder from a Manquillo cross put us 1-0 up at The Leazes End! HONESTLY!-- the noise that greated that goal woz the LOUDEST a'v ever hord in the 57 years a'v been comin' to SJP!

The 3,000 Sporz fans high up in level 7 of that end responded with chants of: "Where were you when you were poor?" (Class!)

We seemed to collapse like a pack of cards after that and Sporz made it 2-1 to them when Harry Kane lobbed ower Karl Darlow in The Toon goal 5 minutes later!----He looked offside to us, but a VAR check conformed that he woz level with play and the goal stood!

And then with 7 minutes left of the half, aa could see fans franically shoutin' and wavin low in The East Stand that sommik woz wrang in the crowd!

One guy woz wavin hiz coat and then Sporz player Reguilon who woz on that side of the pitch, ran ower to the ref and pointed to that section of the crowd!----Someone woz havin a 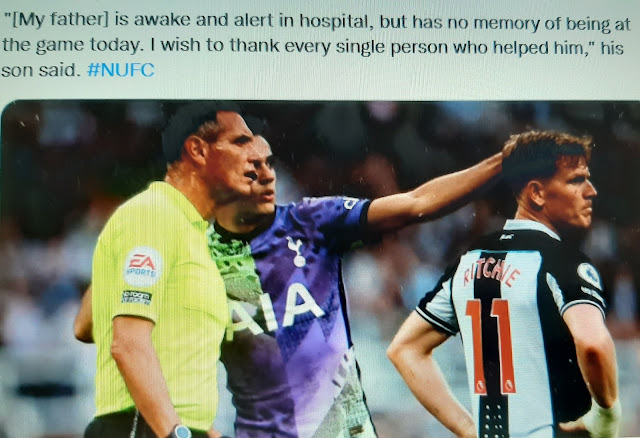 cardiac arrest and a deliberator woz rushed from the dugoot across the pitch!

After wot seemed like an age, the ref took the players off the pitch and we feared the worst az we looked on from The Milburn Stand balcony!   Happily a doctor woz on hand to save hiz life and bring him roond and he got a standin ovation from the crowd!

Some other fans had given the bloke CPR and credit to AALL of them for wot they did!

So, special thanx to Sporz players, especially Sergio Reguilon, doctor Tom Pritchard, St John's Ambulance Brigade and the fans in that section of the stand!---Yoo will be forever in wor hearts!💓

After a 30 minute break the players came back to play the remainin' 7 minutes of the half----However it woz Sporz who increased their lead when a Kane cross foond Heung-min unmarked in the box and he had the simple task of sidefootin the baall into the net after 4 minutes of the resumption!  ---wor 19th goal conceded in 8 Premyaa Leegue games!

The crowd woz a bit flat in the 2nd period az Sporz went for more goals with NUFC unable to dent their defence!

Sporz chants of: "No noise from the Saudi boys!", then came from level 7 of The Leazes!

An own goal by Dier in the 89th minute gave us some hope, but wor visitors held oot with some ridiculous time wasting in stoppage time, but in aall honesty we were lucky just to lose by the one goal! 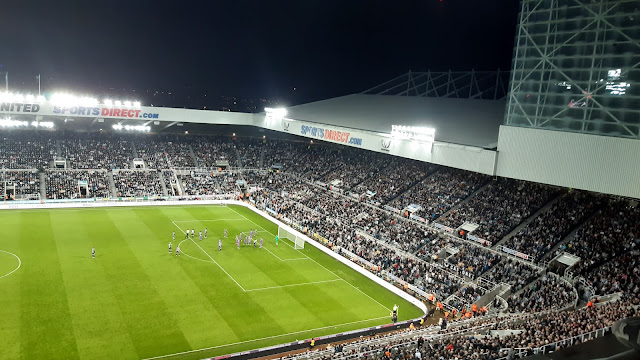 Chants against Brucey started in the 73rd minute and surely he cannit survive for much langer! The shambolic runnin of the club by 'The Fat Controller' haz certainly left it's mark! 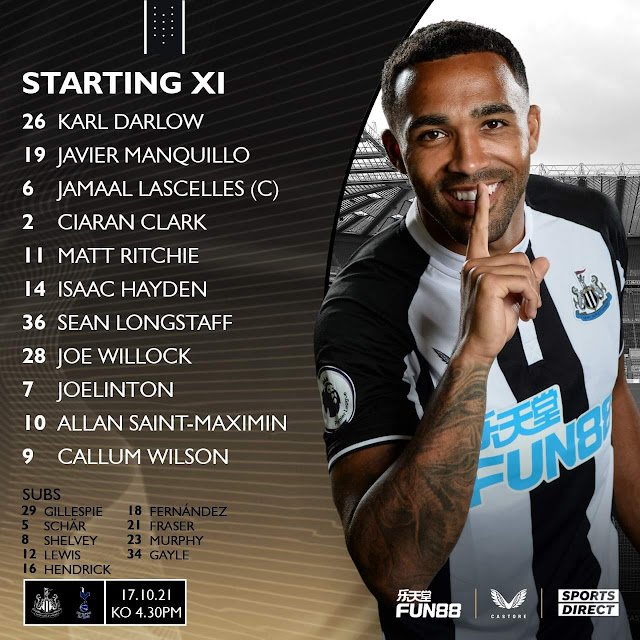 With the investment by the PIF there are much better times aheed for certain!----The richest club in the world, "WILL RISE AGAIN!"

*In The Bodega pre match, az the bar gradually filled up from 'high noon bells' onwards! 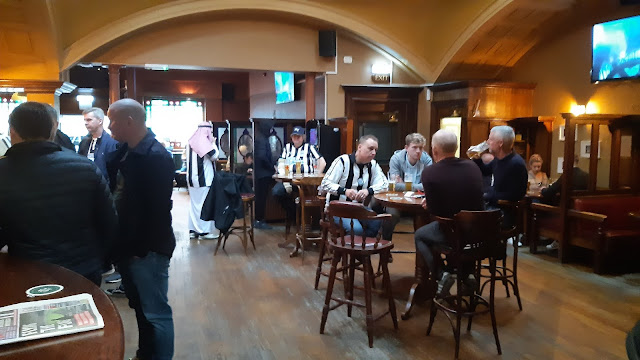 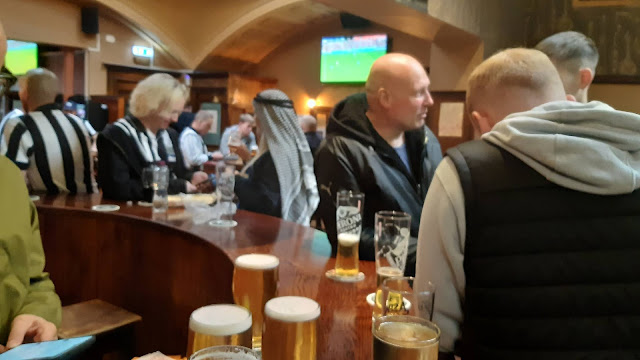 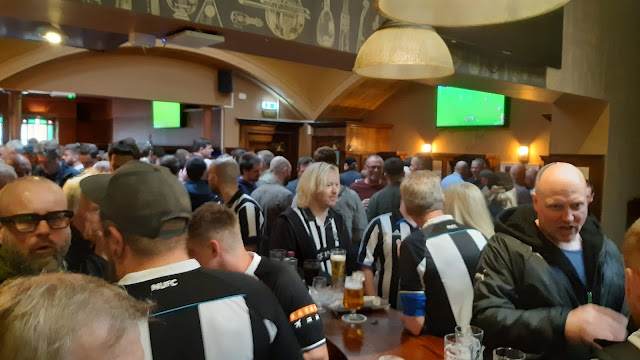 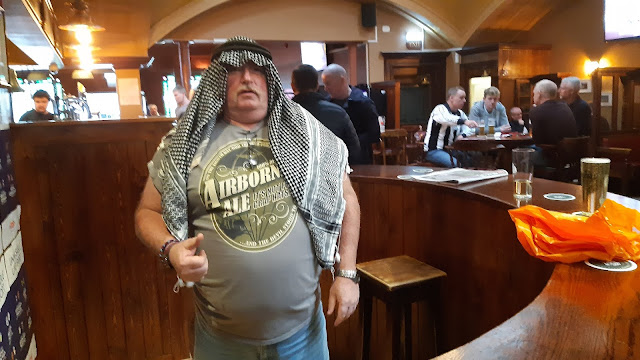 Posted by fink the mad-sad groundhopper at 15:00