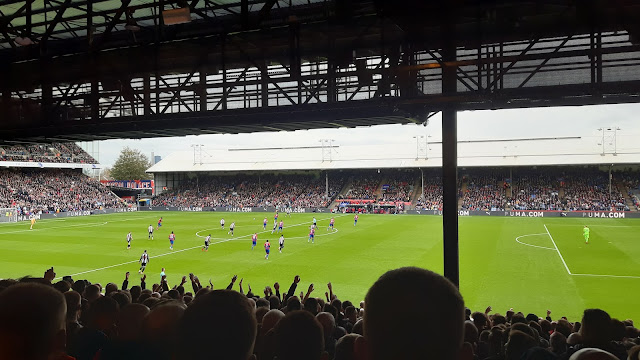 Forst of aall---to the banner that Palliss fans displayed in the home end, condemin' the PIF of murder and human rites abuses!

The banner iz inaccurate az there iz nee proof whatsoever that the PIF had anything to dee with beheadings or the murder of that guy in the Saudi Embassy!  Indeed the PIF who The Premyaa Leegue AGREED were separate to the Saudi government,  deny any wrong doin in this and nothing haz been proved against them!

And aalso a 'dig' at wor fans, with 'We've got our club back' and a magpie at the bottom! (If the PIF had taken their club ower, they would be dancin' in the streets!----make nee misstayk aboot that!) 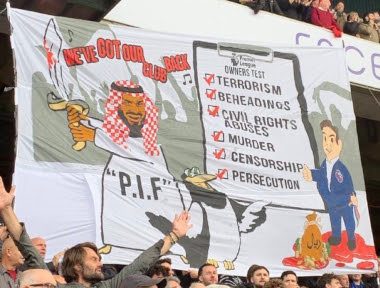 In other words the racist banner (an Arab with a pointed nose and a saber) iz full of assumptions that the PIF were involved, nothin of which haz been proved!---ie: Pure speculation!---Innocent until proven guilty in this country!---The Dibble (police) are investigatin'! 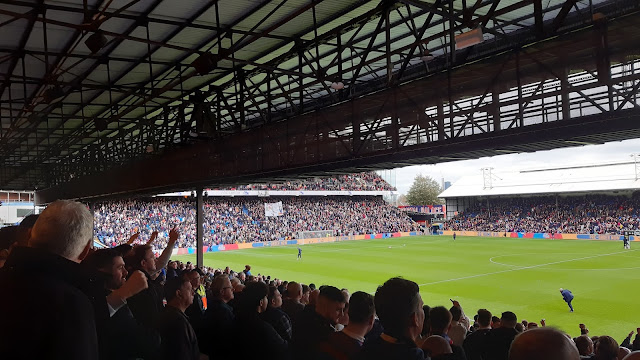 WOR VIEW OF THE BANNER IN THE HOLMESDALE END

Aalthough we couldnt make oot wot the banner said at the time, az we were too far away---the very fact that it woz held up with 2 large poles, begs the question of how the hell did the banner and poles get past security at the entrance gates, when everybody woz searched???? -----Did the Palliss hierarchy naa aboot the banner and approved it???------Speculation again! 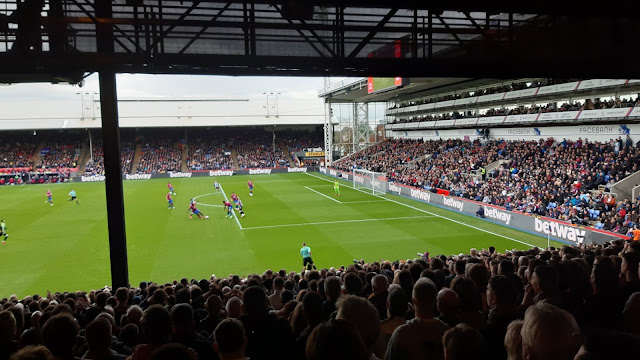 Anyway!---to the match! Graeme Jones took hiz 1st game in charge but it didn't make much difference az the home side were the much better team in the forst half az we struggled to get ott of wor own half and ower the halfway line!

The anly action of note for us woz a clearance of the Palliss goal line from a Callum Wilson effort---apart from that we were the 2nd best in every department az Palliss striker Benteke hit the bar and missed several chances to take the lead!--We were indeed happy to gan in 'nowts each' at the break! 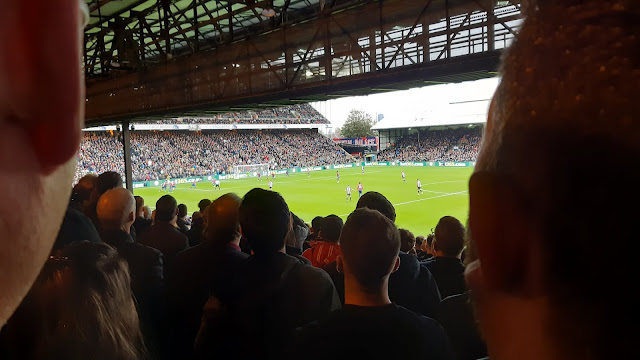 THE REAL VIEW FROM WOR CRAP SEATS (THE CAMERA WOZ HELD ABOVE MEE HEED FOR THE OTHER PHOTOS!)

NUFC were a bit better in the 2nd period, but it woz Benteke who broke the stalemate in the minute with shot from close in, in the 56th minute, to gan 1-0 up!---- 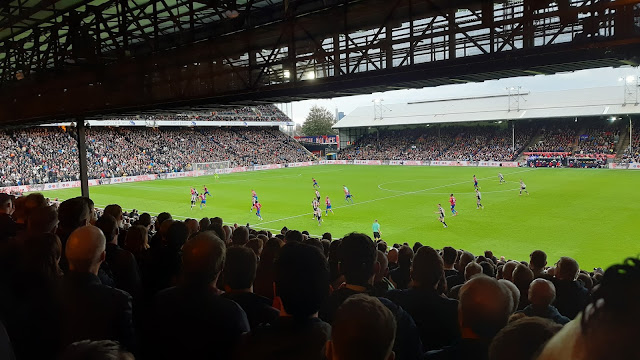 Against the run of play we equalised at The Holmesdale Road End 10 minutes later, with a spectacular owerheed sizzers kick from Callum Wilson to send the 2,800 faithful in the away section wild with delight, with many faallin ower the seats az they celebrated!

Benteke scored again with a bullet heeder in the 87th minute, but a VAR check by the ref disallowed the goal for a foul in the box by a Palliss player, much to the relief of the travellin faithful!

We got the point we hardy disorved, but a point iz better than nowt, az we stayed in 19th place in the table with just 4 points from 9 games and nee wins so far! 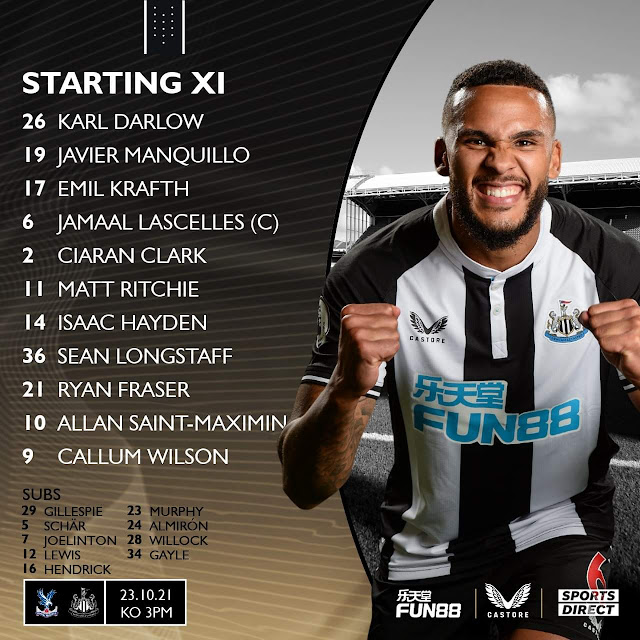 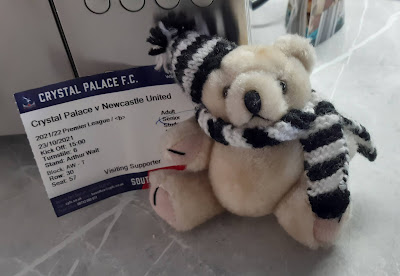 A relegation battle for sure yet again!---But at least we now have some 'hope' when the January window opens wide!---It might not save us, but at least we have a much better chance of avoidin the drop than we would have had under the previous regime! 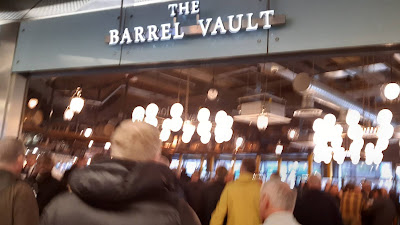 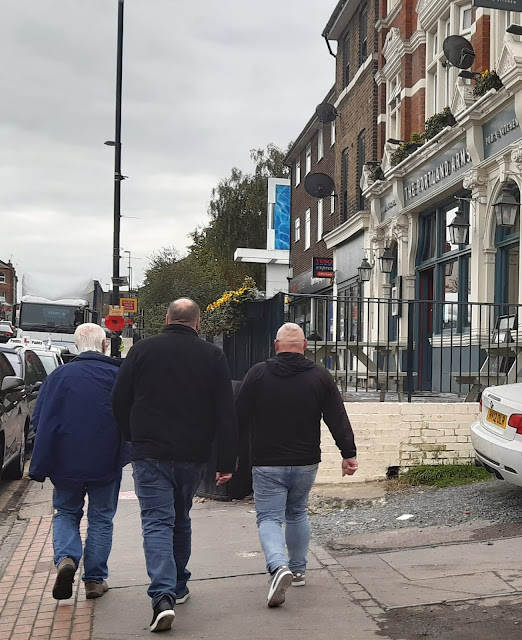 THE PORTLAND ARMS, NOT TOO FAR FROM SELHURST PARK! 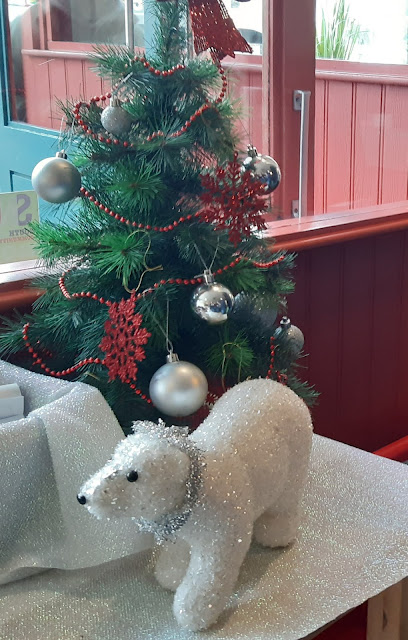 A RARE SIGHTIN' OF A POLAR BEAR NEAR NORWOOD JUNCTION STATION!
"IZ IT CHRISTMAS AALREADY?"

Posted by fink the mad-sad groundhopper at 13:18