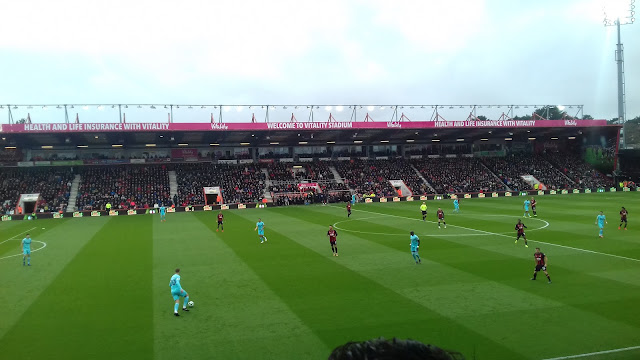 After wor trip to Woking to watch wor 2nd string in action the day before, it woz 'up with the larks' again to catch the '5:26am bells' train to King's Cross in London and then onward to Bournemoooth via Waterloo station on South West Trains!

The jorney to King's Cross woz uneventful and the 280 mile jorney took just ower 3 hours!
We then took the tube to Waterloo---and thats when wor problems started!
The '9:30 bells' fast train woz cancelled and so we had to get the multipal 'stoppin train' to Bournemoooth.

Before we set off for the 1 hour, 50 minute jorney we were warned  that because of high winds the trains were limited to 50mph and that the jorney would take much longer! (They wornt kiddin eethaa!

The toturous 109 mile jorney took 3 and a half hours and we eventually arrived in Bournemoooth at 1:00pm bells' instead of '11:30am bells' with 'withdrawal symptoms' due to the lack of alcoholic liquid lubrications! 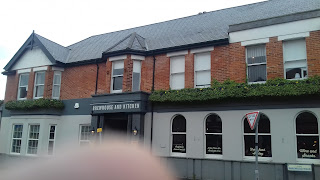 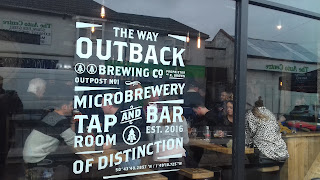 
After deein 2 micro pub stops 'to relieve wor symptoms', we heeded for the groond where high winds indeed circulated the litter on the pitch! 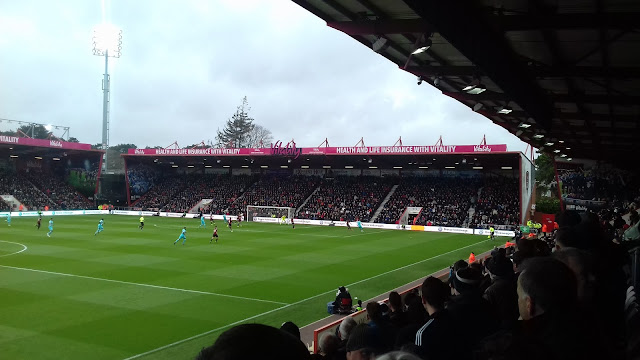 The Toon played in wor light blue change kit and attacked the goal to the right of the 1,200 Toon fans!
It woz a bit farcical in the wind with both teams havin chances to take the lead.

Just before half time many Toon fans heeded for the concourse beneath the stand.
We got a free kick on the edge of the box and Salamon Rondon hit a right footed screamer into the top of the net to give us a 1-0 lead at the break!---100's of Toon fans missed the goal az they supped their ale and smoked their tabs in 'the tool shed'! (Wots the point in makin a 700 mile roond trip and missin part of the match for a drink and a tab!???)

Anyway! and right at the start of the 2nd half the ref gave a very soft penalty to Bournemoooth and King scored from the spot!(we couldnt see why ref Dean had given it?) 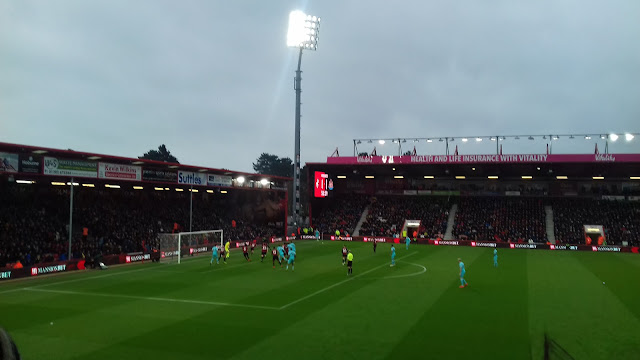 There woz a 'close call' when Paul Dummett stopped a certain goal by kickin the baall off the goal line. Ref Dean looked at hiz watch and for a brief moment we thought that he HAD awarded the goal, but (thankfully!) goal line technology had proved it HADN'T crossed the line!
Bournemoooth then went for the winner and got a second goal in the 77th minute when King fired home from just ootside the box az the rain fell in buckets!

Aall looked lost at this point az the rain and wind swirled aroond!

Deep into stoppage time the baall came to Matt Richie inside the box and he hit an unstoppable left footed volly into the roof of the net to send 'the faithful' into raptures!
Many spilled onto the pitch in celebratory mood and some got nicked  by 'The 'Dibble'!

A valuable point rescued, but it should have been 3 if not for the refs dodgy penalty award! 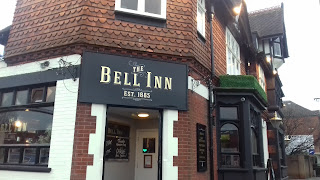 After the match we heeded for the bar next to the train station before catchin the train back to London
(2:30 jorney this time!) 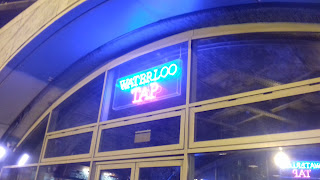 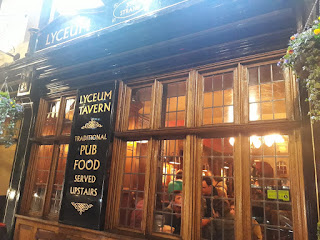 Lyceum Tavern, The Strand,
London
(Special thanx to 'Blondie Alan the Morris Dancer' for this pic
az mee phone battery had 'died' by this time!)

It woz then onward to some liquid lubrication locations near Waterloo station before heedin back to wor hotel in Euston to get some much needed 'shut eye'!   "ZZZzzz!!!"😴

PS: In total the 2 roond trips to Woking and Bournemoooth came to 1,300 miles by rail and 21 hours travellin' time in total includin' 4 tube rides from King's Cross and Waterloo and back!😨

Posted by fink the mad-sad groundhopper at 11:04