The day started off az per usual at ‘The Central’ (station) where we caught the 5 to 8 bells train to King’s Cross (London) and we arrived at ’11:00am bells’ 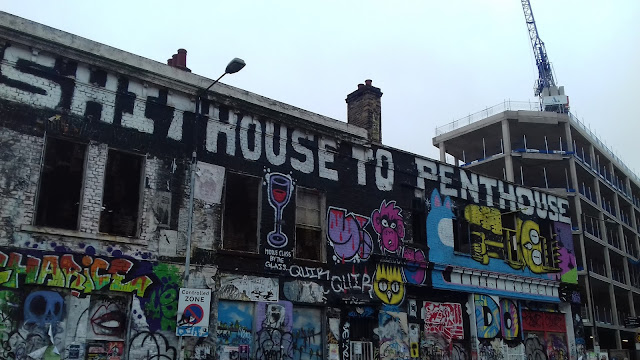 It took the bus 40 minutes to get to Hackney and then  a 10 minute walk to the bar which woz in a semi derelict state in an industrial estate with graffiti sprayed aall ower the place! (see photos) 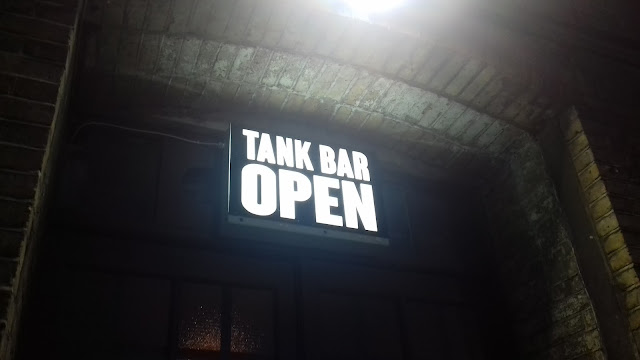 The bar we went to woz caalled ‘The Tank Bar’ which iz one of them new ‘micro-brewery bars’ that are startin’ to spring up aall ower the place. Built in a derelict warehoose it woz ‘rough and ready’ with paint peelin’ off the waalls and there woz even a fork lift truck parked in the alley on the way to the ‘tool-shed’!


It woz fairly empty when we went in, but started to fill up with West Ham fans az kick off time got nearer! 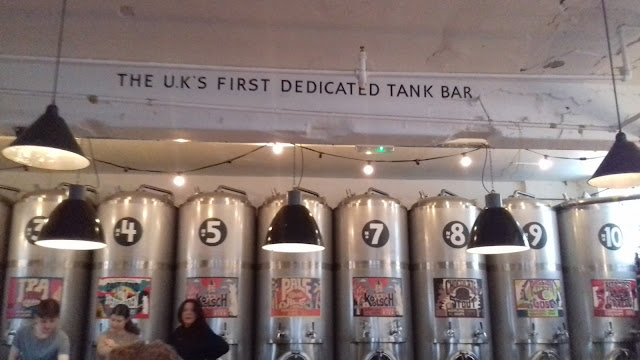 We decided to stay there for ‘the duration’ az it woz faily eezy to get sorved and 4 pint pitchers were  preferred  at £17 a shot—which worked oot at £4.25 a pint, which iz cheep by London standards!


We left the boozer at '2:20 bells' az we didn’t naa just how far the groond woz and were amazed to find that we could see it in the distance az we left the bar, rounded a corner and waalked ower a bridge which spanned a canal! (the reason we were amazed woz because the bar wasn’t 'heavin' az you’d expect for somewhere near a 56,000 capacity stadium!)

10 minutes aftaa leavin’ the bar and we were at the stadium which looked smaller than we thought it would be for a 80,000 seater Olympic stadium (56,000 for futbaall when its convorted) 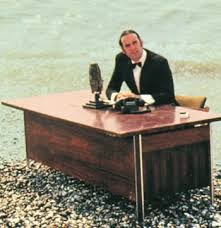 "AND NOW FOR SOMETHING COMPLETELY DIFFERENT!"

We were situated in the 2nd level and aftaa climbin’ some stairs we entered the away terrace to find that we were miles from the pitch!---and indeed 'miles' from some of wor own fans!, who were at the front in level 1 (again see photos of ‘the gap’ between fans and pitch!)


Honestleeee! This iz a brilliant stadium!---for ATHLETICS and hoyin JAVELINS!---but definatly NOT for FUTBAALL---and the owners decision to sell their old Boleyn ground in Upton Park 4 miles away in their ‘heartland’ and move here iz scandalous!


At ‘The Boleyn’ fans were breathin doon the players necks when they took corners and throw ins az the pitch woz within touchin distance of the terraces--- and now yoo would need a jumbo jet engine to de the same thing at London Stadium!—such iz the distance between the touchlines and the pitch!

The dugoots were SO far from the touchline that it would have been easier to jump on a golf buggy to get to the edge of the technical area!


Of aall the 330 groonds I have watched NUFC teams (from the forst team to the juniors), this iz the forthest distance from the pitch I have ever been!---and that includes The Nou Camp in Barcelona, The Olympic Stadium in Rome (v AS Roma) and The Stadio Delle Alpi in Turin! (v Juventus)


Anyway!--- the game kicked off and disaster struck within 6 minutes when Henri Saivet gave the baall away to Arnautovic <(hope av spelt that reet?) who ran through wor defence az though it didn’t exist, to plant the baall past Rob Elliot in the Toon goal!


But then Saivet redeemed himself when he took a free kick at the far end from us in the 10th minute, which whistled past ‘The Jellied Eels’ goalie Adrian, just inside the near post!---and then there woz some confusion to who had scored, az we were that far away, we couldn’t hardly make the players oot, az they looked like Subbuteo figures from row 58 of the back tier!
It woz like watchin' a match from ootside the groond from a block of high rise flats! (AND there were anothaa 20 rows behind 'us'!)
So it woz---“Zero to hero’ in the space of 4 minutes for Saivet, when we eventually foond oot who HAD scored!”

2 woodwork strikes then followed from Gayle and Richie which should have put us forthaa aheed, but ‘lady luck’ deserted us once again (just like against Everton)
Gayle then missed a great chance from 15 yards oot, but blazed hiz effort ower the bar and we went in on level torms at the break, cursin' wor bad luck! (and finishing!)


The 2nd half started off at blisterin’ pace and within 8 minutes of the restart we went aheed when Diame sidefooted the baall in from 8 yards oot in front of the 3,000 Toon fans behind that goal!
(az we were kickin’ ‘wor way’ we could now make the goalscorer oot!)


Then a penalty save by Elliot (from a foul which looked outside the box to us at the far end) woz followed by a 3rd goal from ‘us’ when Atsu put  the baall into the far corner of the net to send the ‘faithful’ ballistic!
3-1 to The Toon


It woz at this point that many West Ham fans heeded for the exits---and there woz still half an hour to gan!?


We then had a nail bitin and hair pullin last 20 minutes az they pressed for the equaliser, but we ‘hung on in there’ and won the 3 precious points, which ended wor 2 month winless streak and propelled us up to 15th in the table, just 3 points behind Brighton in 12th place!


From ‘them’ downwards just 9 points separate the rest!


We heeded back to the boozer we had started from and then 'The Crate' next door, before jumpin back on the number 30 bus back to King’s Cross to catch the ‘8 bells’ train yem!

Factfile: Oot of the current 92 Leegue teams, this woz NUFC’s 81st groond visited and The Geordie Times haz been to aall 81 az well! (Big Al <(NOT the sheet metal workers son!) and Sarnie Steve have now done them aall following othaa teams az well and have now joined 'The 92 Club'!)


For the record the 11 groonds that NUFC have nevaa played on are aall in the bottom 2 divisions: