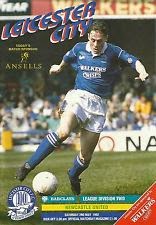 
This is a day that ah winnit forget in a hurry!, as this is the day that the Toon very nearly got relegated tih the old Third Division for the forst time in wor 100 year history.


If the Toon lost this one and Oxford won at Tranmere, then we would be relegated. Leicester on the other hand, were gannin for a place in the play-offs, so, as yih can imagine, the atmosphere was tense tih say the least!.


Ah was like a nervous wreck by the time the match kicked off, and the whole crowd were on tender-hooks!.


The forst half seemed tih flash by, when, deep into injury time, Gavin Peacock scored his 21st goal of the season tih put the Toon ahead, despite a linesman franticly wavin' his flag for offside!.


The Newcastle fans, who were aal standin' on their seats, went absolutely crazy!, then the ref blew for half time which did'nt pleeze the 'City' fans, who started hoyin coins at wih, as we were headin' for the 'toolshed' tih get rid of wor excess 'liquid refreshment'!


The atmosphere had torned very hostile by the time the teams re-amerged from the dressin' rooms for the start of the second half.


Ah can't remember too much aboot this half either?, (probably, coz ah was half-pissed!) but ah knew that as lang as we were winnin', then wi'd be safe.


Then disaster struck!, when Paul Walsh headed an equalizer for Leicester dead on full time!.


Aal of a sudden everythin' had changed.


If Oxford were winnin' at Tranmere, they would owertake us, and we'd gan doon instead!, but neebody seemed tih naa what their score was?.


At that moment, ah was filled with a terrible feelin' of 'dread' of not naa'in what wor fate was, and the anly thing that ah could think aboot at the time, was that if wih went doon, they'd be havin' street parties in 'Mackemland'!.


(After aal, 2,000 Toon fans had went tih Joker Park tih cheer on Gillingham, in the relegation play-offs five years earlier, when the Mackems were ingloriously relegated tih the Third Division, for the forst time in their history!)


The tension was unbearable as the Leicester fans celebrated their goal by invadin' the pitch, and they held up play for aboot five minutes---then!---a few minutes after the pitch was cleared by the local 'Dibble', Leicester's Paul Walsh, amazingly!, torned from 'hero tih villian' when he put through his own goal, with (what torned oot tih be) the last kick of the game!, six minutes into injury time!, tih send the 'Toon Army' into raptures!.


Ah was jumpin' up 'n' doon on mee seat like a 'mad mad possessed', not carin' if ah fell off an' injured meesel!.


The Leicester fans on the other hand, had torned really nasty by nuw, and invaded the pitch again, hoyin everythin' at us, from coins tih broken seats!.


David Elleray the ref, took the players off for their aan safety, and a few minutes later, (on police advice, nee doubt!) it was annouced ower the tannoy that the match would'nt be restarted, and had in fact, been completed!.


Keegan, 'The Messiah' had saved us!----and did wih celebrate!


WHO CARED!, how Oxford were gettin' on nuw!


WHO CARED!, that the Leicester fans were hoyin everythin', bar the kitchen sink at us?


WHO CARED!, if the Mackems would be cryin' in their f***** beer when they foond oot the score?


DEFINATELY NOT ME!, that's for certain!.

After the match, wih headed for the coaches, and yi'd iv thought wi'd won the League Championship!, and not avoided relegation!, as the Toon fans danced in the streets!.


Personally, ah felt that a 'ten ton weight' had been taken off mee shoulders!.


'King Kev' had saved us from 'a fate worse than death'!, and a 'new chapter' was aboot tih begin in Newcastle's lang and 'tangled' history!.


Newcastle are one of anly eight teams who've NEVER played below the top two divisions.


We will give yoo the answers tomorrow at the bottom of this article!---Divvint 'Google' it---NE CHEATIN'!

Posted by fink the mad-sad groundhopper at 14:32