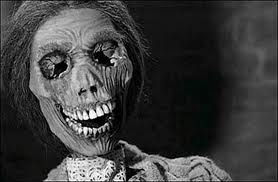 “SORRY ABOUT THE CHIP IN THE CUP!”

“THE TALE OF THE CHIPPED CUP!” (WITH NE HANDLE!)


Aa went on ‘Finks Travels’ for this one (ie: MY ‘jamjar’!) and in addition ‘Magpie Travel’ had aboot 20 bus loads of fans who’d aalso made the jorney doon, which meant ‘The Toon’ had a canny followin’ on this grey October day!


Ronny ‘The Hunter’ who waz one of wor travellin’ companions had insisted that we left orly to catch openin’ time in Watford and we duly set of at ‘six am bells’ to comply with hiz wishes!


However!---we got there very late coz of major traffic congestion on the ‘M1’, and wih parked behind some allotments doon a narrow lane a few hundred yards from the groond with less than half an hour to spare ‘til kick off and to top it aall we were ne where near any boozers eetha! (much to ‘The Hunters’ annoyance!)


Yih had ti walk through the ‘said’ allotments tih reach the tornstiles and with the ‘three bells’ start time approachin’ we had to make A MAJOR DECISION!---ie: Eetha miss wor pre match ‘gargels’---or!---miss the start of the match!


It waz ‘ne contest!’---‘the match’ waz more important than’the hootch!’ and so we hurried towards a ‘cut’ which winded through the allotments and tih the tornestiles beyond!


It waz more like ‘Follow the grey shingle track’ than ‘Elton Johns’ ‘ Follow the Yellow Brick Road!’ and some keen gardeners were merrily diggin’ their ‘precious plots’ and hoein’ the weeds az the Geordie hoards made their way to the groond! (diggin’the weeds waz obviously more excitin’ than watchin’ Watford!)


There were lang queues at the tornstiles, and so it waz just az well that we’d went straight there, rather than gan for ‘that’ ‘gargel’ doon the road! (yiv got to get yi priorities reet!—ah meen!---yih can get a few Arthur Scargills at anytime!---carnt yi?---but yi can hardly ask Peter Beardsley tih ‘re-score’ hiz spectacular owerheed sizzers kick again coz yi missed it!---can yi?)


This waz a typical lower league ground of that time, with a mixture of open terraces and wooden stands.


A’d managed to get a good vantage point az the game kicked off, but there were hundreds of Toon plonkies who had ‘risked’ a ‘quick liquid’, who were still ootside, desperate to gain admittance az anly two tornstiles were open! (which waz typical of a ground like this in them days!) and yi could hear them shootin’ and baallin’ to get in! (drunken bu**ers!---shud have got hear orlier like us!)


Watford would normally expect a few hundred away fans and not the thoosands that The Toon had brung that day!  The players ran oot to rapturous applause with ‘ROCKET MAN’! (wot else?) blarin’ oot ower the (very!) loud speakers! (*a message to aall yeez ‘young pups’ readin’ this!---Elton John waz Watford’s chairman in them days!)


We made a great start orly on and took the lead after fine work from Chris Waddle on the wing, who foond Pat Heard and he threaded a through baall to Neil McDonald who fired home at ‘The Vicarage Road End’ at the far end of the groond from us.


John Anderson then made two excellent clearences off wor goal line and thanx mainly to him we went in 1-0 up at half time.


It wasn’t lang before we doubled wor lead in the second period when Heard and McDonald combined to send a through baall to ‘Pedro Beardsley’ and he slooted the baall past the advancin’ Watford keeper to put us two goals clear in front of the ecstatic 3,000 Toon faithful in ‘The Allotment End’.


However!---this waz NUFC and before lang the home side had pulled one back followin’ tremendous pressure on the Toon goal.


The Inevitable equaliser came a few minutes later and a point looked on the cards.


Nevertheless!---Kenny Wharton had otha ideas and put us 3-2 aheed near the end to the fotha delight of the travellin’ fans.


Wor hearts then sank in injury time az ‘The Blaydon Races’ rang oot aroond Vicarage Road when Watford cruely denied us wor win with a last gasp equaliser! (it just wasn’t to be!)


“THE HOUSE OF HORRORS!”


After the game we heeded back alang the track and after stickin’ a pin in mee ‘AA’ road atlas, wi decided to heed for Loughborough in Leicestershire az it wasn’t too much ‘drinkin time distance’ away! (er!---actually! The ‘pin’ had ended up stuck in some unprenoooceable place in north Wales with with aboot twenty seven letters beginnin’ with ‘LLL’! (too far away for a ‘gargel’, and in the wrang direction!---so Loughborough it waz!)

We duly arrived in Loughborough,  namely Bob ‘’Patter’, ’Tex’ Taylor, Ronny ‘The Hunter’, ‘Fawlty Dowaz’, ‘Smudger’ and of course little ol’ me! (Er!—that’s six of us in a five seater car?---mee memory must be playin’ tricks???)


A scruffy deranged lookin’ ‘Rigsby type character’ waz eavesdroppin’  on wor conversation az he supped hiz pint of ‘lubrication’ at the bar!  He waz az ‘skinny az a rake and he had lang scraggly hair and huge teeth that a shire horse would have been proud of!


He piped up---“I’ve got a large lodgin’ house not far from here and I could put you up for TWO QUID includin’ a bacon and egg breakfast in the mornin’ az my lodgers are away at the moment!”


TWO F*****’ QUID! FOR BED AND BREKKIES!?---It was an offer we COULDN’T refuse and so we arranged to meet him at ‘chuckin’ oot time’ ootside the boozer!


Battered and bruised with the drink (we bumped into a couple of lamp post on the way!) we staggered back to the forst boozer after several pints in the toon centre hostelries and dives. ‘Rigsby’ (az he waz now ‘affectionately’  known!) duly torned up (‘cattle trucked’ az well!) at the appointed time and we heeded up a hill with ne street lights where a huge three story hoose stood on it’s own.


Uncannily---it looked remarkably like Bates Motel in the Alfred Hitchcock house of horrors film ‘Psycho’ and the anly thing that waz missin’ were a few bats and ‘Norman Bates’ himself! (the psychopath hotel owner in the film!) Although there waz a full moon to complete the scene! (Honest!)


But!---and  come to think of it!?, wor 'deranged friend' with hiz huge teeth and scraggly hair DID look a bit like Norman Bates’s mother from the same film! (help!)


Anyway!---He took us up to the rooms where threadbare carpets adorned the creakin’ floorboards and me and ‘Smudger’ were allocated one of the lodgers rooms on the second floor, which wouldn’t have been oot of place in Steptoes livin’ room. (hardly ‘The Ritz’!---ne wonder it waz anly two quid a neet!)


Az soon az we got in we  bolted the door securely,(just in case!) and ‘Smudger’ (who I didn’t naa very well) then started searchin’ the draws and cupboards,  where he foond a half eaten ham sarnie covered in green mould and an apple ‘gook’ which had been bitten to the core!


From there he went into ‘the toolshed’ and took the back off the toilet cistern to have a look inside???


He then came back and started takin’ the pictures off the waalls and undoin’ the frames to look inside the back covers???


“This iz where they hide the money, Fink!”, he said excidedlee az he prized a picture frame off with a kitchen knife he’d foond in one of the draws, but hiz sorch for any hidden ‘treasure’ waz in vain (apart from the sarny and apple gook!) and he re-hung the pictures back onto the waall


Next mornin’ aa had a quick wash n’ brush up in the manky bathroom, az there waz ne way aa waz gannih take a shower az half the floor tiles were missin’ or broken.  On top of that, there were loose electric cables hangin’ from the wall sockets next to the shower cubicle and aa didn’t fancy bein’ electrocuted! (OR stabbed to death, like in the film!)  It waz then doon the stairs to the manky basement dinin’ room where brekkies waz bein’ sorved from ‘hells kitchen’.


‘Rigsby’, who looked eerily like ‘death waamed up’ from hiz hangower ,  offered me a cup tea, but when he came back with the cup,  he uttered these ‘immortal words’ that will live with me forever!: “SORRY ABOUT THE CHIP IN THE CUP!”, he said, az he handed it to me------the anly problem waz!!!----it had NE F*****’ HANDLE! (which had been broken clean off!) 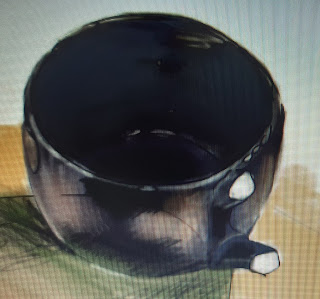 AN ARTIST'S IMPESSION OF THE 'SAID' CUP!


After a quick ‘slurp’ of stewed tea from ‘the cup with ne handle’, aa peered into ‘hells kitchen’ and could see that the stove waz thick of grease az he used the fryin’ pan spatchaler to flick the black fat onto the fried eggs, most of which missed the eggs and splattered onto the filthy waalls! (the word ‘food poisonin’ came to mind!) (ie: Egon Ronay cuisine it wasn’t!)


But we WERE ‘Hank Marvin’ by this time (starvin’!) and we forced the bacon, eggs and grease laden brekkies doon wor ‘john o groats’! (nearly ‘hoyin up’ in the process!)  before sayin’ wor ‘goodbyes’, thankful that we hadn’t been electrocuted, poisoned or stabbed to death in ‘the house of horrors’!


It waz then a three hour jorney back up the M1 and A1 back to Tyneside and yet another story to tell for the archives!----and di yi naa wot!?---a’v NEVA been back to Loughborough since that day!

Posted by fink the mad-sad groundhopper at 22:00