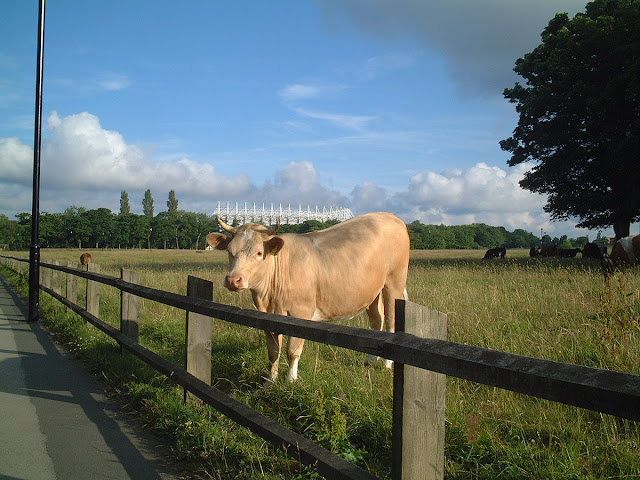 A COW ON THE TOWN MOOR ("ER! SORRY!") 'BULL'
WITH ST. JAMES' PARK IN THE DISTANCE!
FOR AN EXPLANATION OF THIS PHOTO, SCROLL DOON TO THE END OF THIS ARTICLE!
"AA TOLD YOO SO, BUT AA WISH AA WOZ WRANG!" 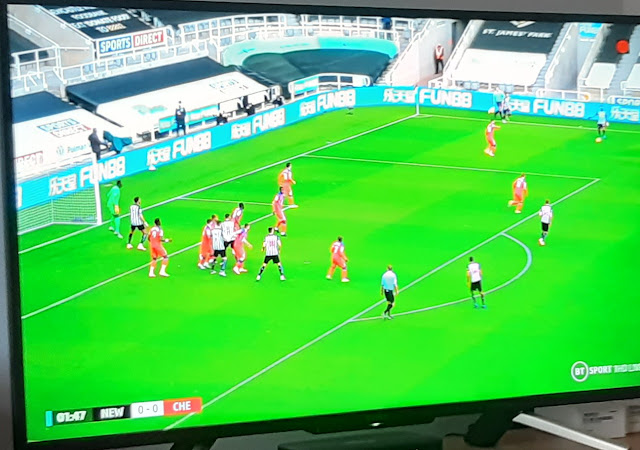 Mee mate 'Tex' Taylor invited me to hiz hoose in Howden to watch the game, az aa didnt fancy watchin it on a dodgy channel on mee laptop in wor hoose! (Aa divvint have any of the pay per view channels) (Howden iz between Waallsend and Tynemooth on the Metro line) A visit to hiz local conveeeniance store to buy some broon ale woz the forst thing aa did when aa got to Howden and then it woz off to hiz hoose to settle doon and watch the game!

And a totally predictable non performance from those in black n white striped shirts woz the outcome of yet anothaa "faall asleep game!"

We actually started off well in the first 5 minutes as we attacked the Leazes goal, but after this Chelski totally dominated the game for the next 85 minutes!

After missed chances and excellent saves from Karl Darlow at the othaa end, the predictable happened in the 9th minute when Fernandez inadvertently put the baall into his own net to give wor visitors from London a deserved lead!

A few minutes later the telly flashed that Chelski had had 92% possession at that point!!!

After several more near misses NUFC finally broke away through Joelinton and from near the halfway line he attempted a shot which went well wide and into the empty seats of the lower section of The Leazes End! (Wor 'highlight' of the forst half!) "ZZZZzzzz!!!!"😴 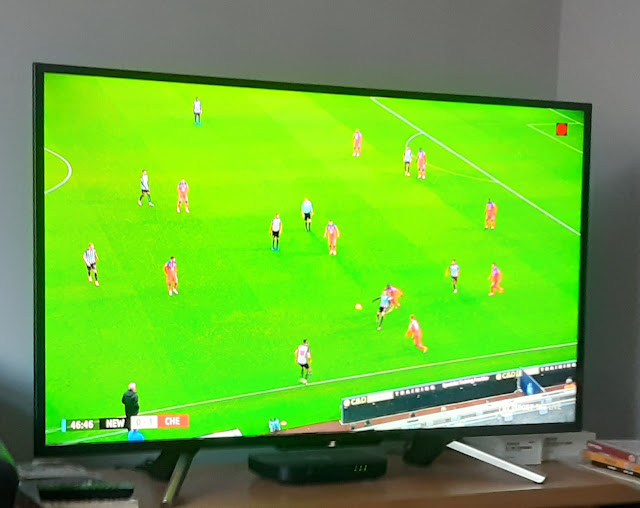 It just aboot summed us up and aa nearly hoyed an empty bottle of broon at Tex'z telly in frustration!

Somehow it woz still just 0-1 at the break and the graphics told us that the possession rate woz 20% to 'us' and 80% to Chelski with NEE direct shots on goal from NUFC!

The 2nd half wasnt much better and we still haddint had a shot or heeder on target when Chelski killed the game off in the 65th minute when Abraham fired home, with a shot that went in off the far post at The Leazes End!

Sean Longstaff hit the bar 7 mins later with a glancin shot that went ower  the bar, which woz the closest we came to scorin' aall game!

(Wor 'highlight' of the game!)

Broken Nose Bruce then took the anly player that woz likely to score OFF in the 74th minute (Saint-Maximin) to be replaced by Andy Carroll! (Who hazzint scored since he came back, well ower a year ago!)

And then the moment of the game in the 84th minute!

NUFC are 2-0 doon, we get a throw in near the 18 yard line of the Chelski half at The Gallowgate End---and after 4 passes it ends up in with goalie Karl Darlow at the Leazes End!  (Yi couldnt make it up!) 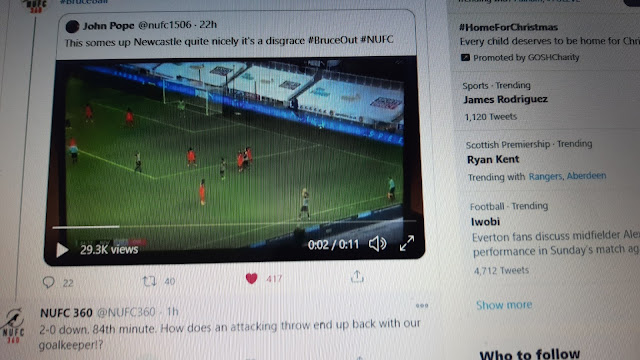 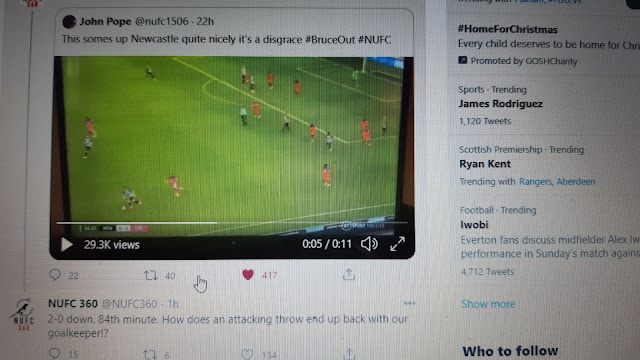 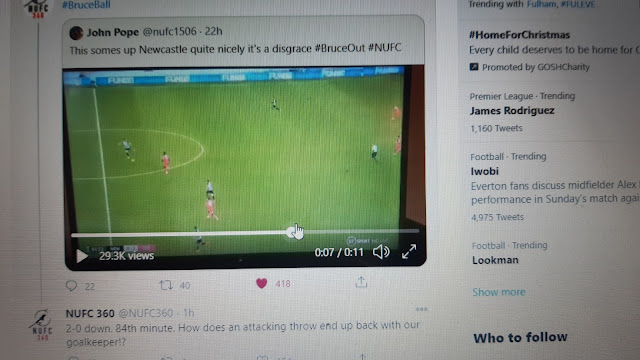 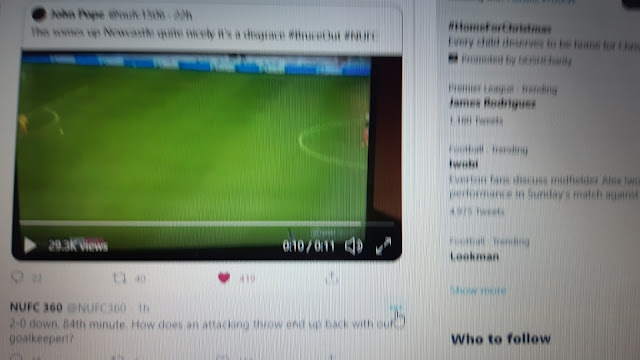 Aa honestly cannit remember the Chelski goalie havin to make one solitary save in the entire game? (Pleeeze correct me if a'm wrang?)

PS: Since been told that Almiron did have a deflected shot saved by Mendy in the visitors goal, at some point in the 2nd half? (Must have been to the 'tool-shed' for a 'gypsies kiss' when that happened!?)

The final whistle went and in the post match interviews Bruce said that: "There were pleasing points in the second half!" (Were there Steve?---Yoo mustiv been watchin a different game to us, like!)

Official attendance in Tex'z hoose: 2  (we are in the same 'bubble') (alledgedleee!)

Mee pre match prediction that NUFC would have 30% of the possession to Chelski's 70% woz nearly reet! (29% to 71%) and aa said that we would have 3 shots on target, when we had just one solitary deflected effort!

WE are SO predictable---for aall the wrang reasons! 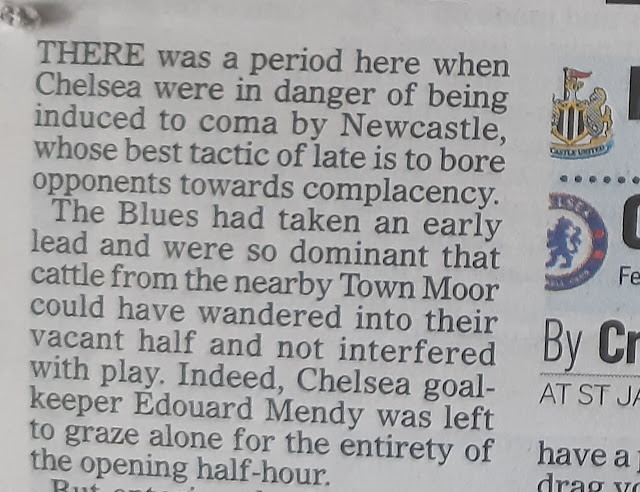 A BRILLIANT PIECE BY CRAIG HOPE OF THE MAIL ON SUNDAY!