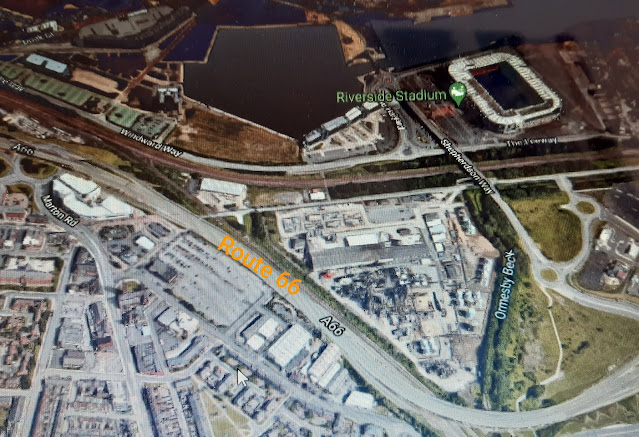 "GET YOUR 'KICKS' ON ROUTE 66!"
This win meant that NUFC went 12 points clear of Man U at the top of the Premyaa Leegue for a brief period!
Az we travelled doon the A19 towards Teesside, on 'Barrett's bus', yoo could see from a distance the huge steel and chemical works that darkened the skyline with pollution, smog and dust! (a more depressin place in the UK would be hard to find!)

VIEW OF TEESSIDE FROM THE A19
(Now yoo know why they are caalled 'The Smoggies'!)

However! Wor forst ever visit to 'The Smoggies' new tin shack abode, woz not a happy one for some Toon fans, who were ambushed and attacked by 'The Smog Monsters' near the A66 duel carriageway near to the stadium before the kick off!
Some Toon fans, includin' Davy 'The Silver Fox' were kicked in the back, az the fighting spilled onto the carriageway, stopping the traffic in the process--which brought a new meaning to the legendary song, 'Get your 'kicks' on route 66'! (sic!)
This woz the forst of the 'new build' stadiums and it looked like a chatty Lego construction from the ootside---built on the cheap for certain!
It woz near some chemical works and the smell woz akin to rotting eggs az we waalked past, az plumes of thick smoke rose into the sky above!
Inside, we were behind the goal and one Toon fan had a full chemical suit on and he woz reet next to the segregation area, with the Boro fans on the othaa side!   They were non too pleezed to see him and were gannin metal az he stood with his arms folded, lookin their way!
It woz hilarious!  (After this game the 'dibble' banned away fans from wearin face masks!)
The game 'kicked off' with The Toon on the attack from 'the off' az we attacked the end we were in! (NUFC had obviously lost the toss!)
But it woz 'the Smoggies' who had the better chances az they went close several times, with Brazilian Juninho their star man!
In the forst half Keith Gillespie had a great chance in front of the 3,000 Toon fans behind the goal, but hiz effort went wide!
But then disaster struck in the 37th minute, when, at the other end a Juninho cross woz inadvertently put into hiz own net by John Beresford az the 'Smog Monsters' went wild with delight behind that goal!
The turnin' point in the game came in the 2nd half when new signing Tino Asprilla replaced Gillespie and hiz pinpoint cross from the wing foond Steve Watson's heed and he plants the baall into the net for the equaliser in the 74th minute!
The drama wasnt ower however, and just 4 minutes later, a Peter Beardsley pass foond Les Ferdinand who made nee misstayk az he fired a shot underneath the body of Boro goalie Gary Walsh to win the game in the 78th minute!----This sent the Toon fans crazy at the other end!
Az the final whistle blew, there were scenes of jubilation az NUFC went 12 points clear at the top of the Premyaa Leegue table!
The convoy of coaches filled with very happy Toon fans left on the retorn jorney to Tyneside via the A66 (where else?)
"Get your kicks on route 66!" (You'd better beleeeve it!) 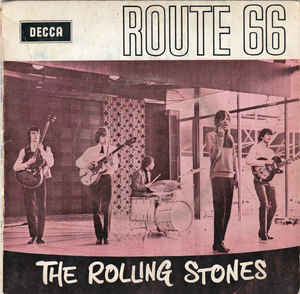 Posted by fink the mad-sad groundhopper at 11:59