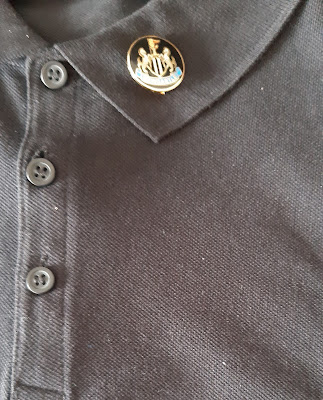 The day started off at '5:30am bells' when a dragged mee lifeless body oot of mee 'pit-scratcher' (bed!) to catched the train to King's Cross (London) and then onwards to Wotfaad via Euston station alang the road!

The ticket inspector came roond and he didn't have a ticket!  He woz told he would have to pay £130.50 for a ticket to Peterborough(where he said he woz gannin)

He eventually paid and woz told if he woz seen on the train after Peterborough that he would be fined £430 for fare evasion!

He DID get off at Peterborough, but just sat on a platform seat, obviously waitin for the next train to London! (Yoo couldn't make it up!)

On arrival at King's Cross we had time for a swift 'gargel' in The Rocket on Euston Road before continuin' wor jorney to 'Elton John country' (he's a Wotfaad fan, in case yiz didnt naa!?) 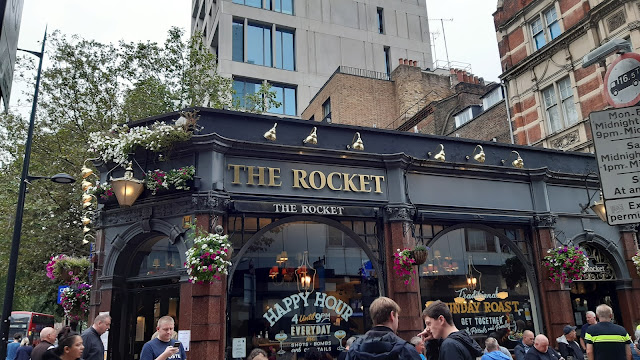 On arrival at Wotfaad Central, we made wor way to wor forst port o call there, namely The Wellington Arms'! 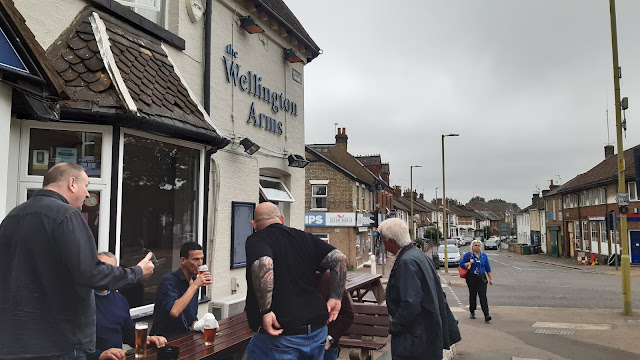 ---The next boozer woz just across the road caalled 'The Estcourt Arms', which woz boarded up the last time we were here, but thankfully now reopened for 'liquid lubrication purposes! 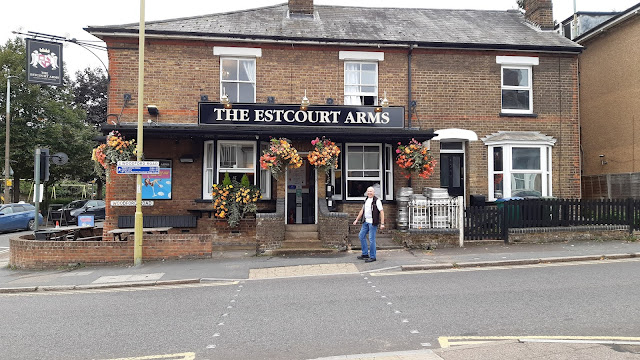 View from The Wellington Arms! (It's a lang walk from 'The Welly'!)

From there we made for a boozer closer to the groond caalled 'The Golden Lion', where aa ordered a pint of Doom Bar bitter! 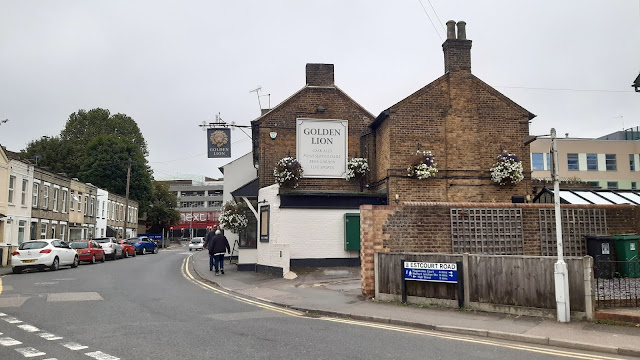 The barmaid sorved me and then said: "I notice that you are a Newcastle fan and this is a 'home fans only bar'!" (she noticed a smaall Toon badge on mee Tee shirt lapel) "I'll serve you this time, but you will have to leave after that!", she added! (Yoo could say that she woz 'badgering me (sic!) 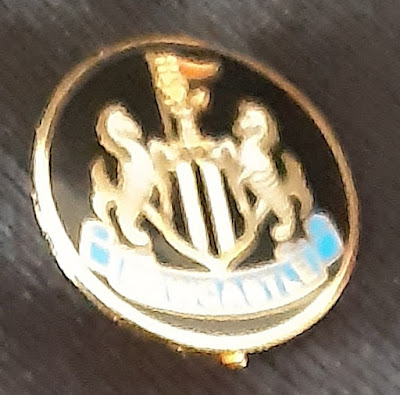 I heeded for the beer garden at the back and told the lads wot had happened, to great merriment from them and somebody knocked their pint over az they took the p*ss out of me! 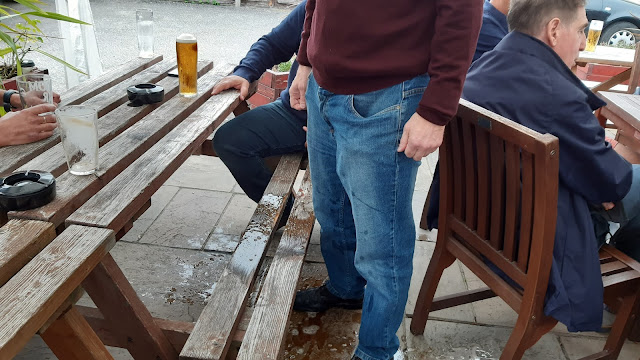 SORVES THEM RIGHT FOR TAKIN' THE P*SS!

None of the other were wearin Toon colours and then aa noticed a fan in a Toon top at another table!----How did HE get sorved, aa thought???

Anyway!---az this woz wor last 'port o call' before the match, aa had to get 'Sarnie Steve' to get me the next 'liquid refreshment' and then 'Big Al' (not the sheet metal workers son!) the one after that!

This saved me queuin' at the bar and az aa had nee change, they had to buy mee pints az well! (MUST dee this more often!)

It woz soon time to gan for wor 'punishment' (the match!) and we jumped the queue to get in az it woz massive at The Toon tornstiles! 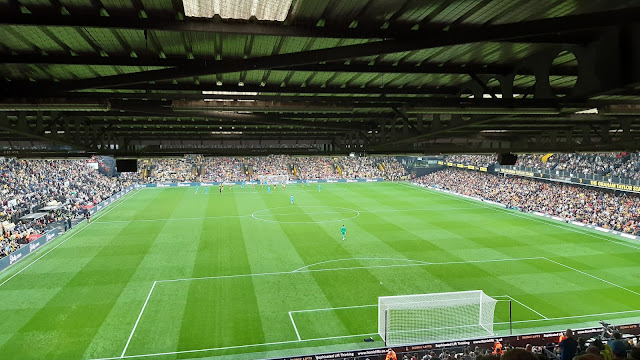 We were in the back row behind the goal and wor fans were in good voice before the start---slaggin off Brucey and Elton John! (we wont repeat wot they were singin aboot Elton, but the now usual, "We want Brucey out!", chants were loud and prolonged!

The Toon were clad in wor light blue away strip, similar to Man City's, but a million miles from their quality!

I'm afraid once again, the game woz poor and borin', with 2 teams who will be in the relegation dog fight for sure!

The highlight of the half woz in the 23rd minute when a 30 yard screamer from Saun Longstaff, rocketed into the corner of the net at the far end from us, to send the 2,200 Toon fans wild with delight!

We had chances to increase wor lead before the break, but failed miserably to put the game to bed   HT 1-0 to 'us'! 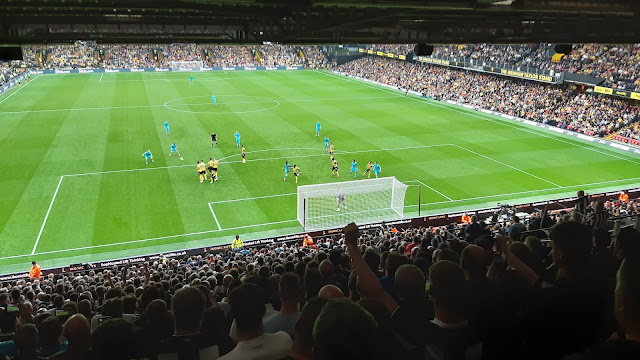 Good chances for Almiron, Joelinton, and Willock, went 'a beggin' in the 2nd period and we paid the price for that,  when Wotfaad equalised through an unmarked Sarr heeder from a corner kick, in the 72nd minute, to bring the home fans 'to life'! 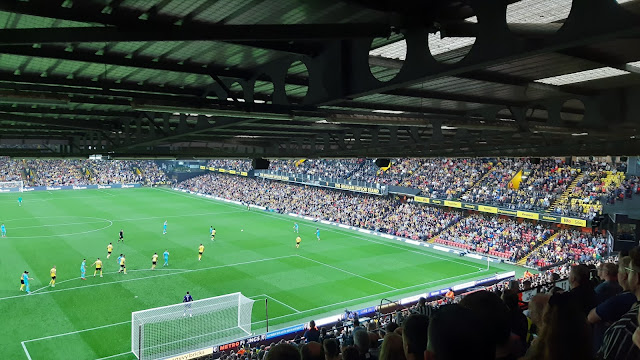 Near the end Wotfaad scored again, but VAR ruled that it woz 'offside' and we escaped with a point, when we should have had aall 3, az Murphy woz clean through in the 90th minutes, but tried to lob their goalie, but failed miserably!-----It's now 11 top flight games at Vicarage Road for NUFC and not one solitary victory!

At the end of the day we were 'badgered' into submission!--- in more ways than one! 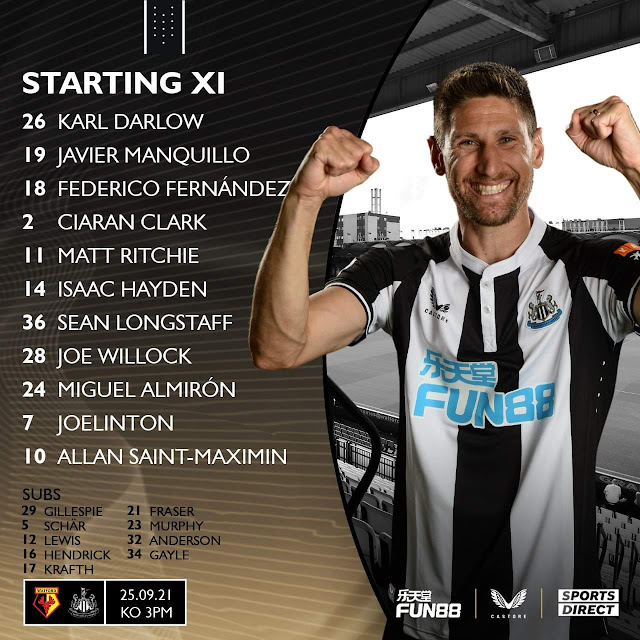 The post match 'gargels' took place in The Estcourt Arms (again!) and 'The Northumberland Arms' near King's Cross station, before we caught the train back to Tyneside! 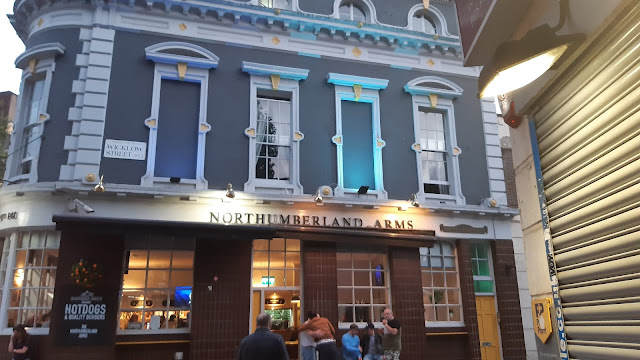 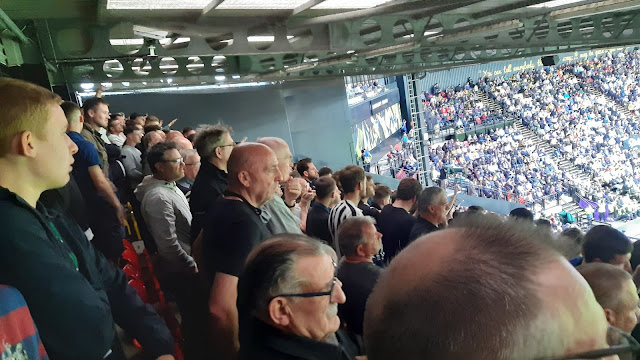 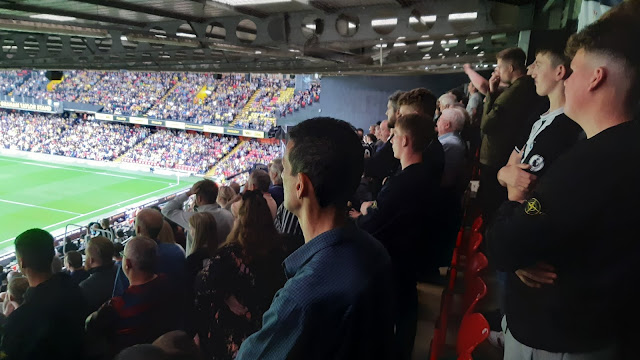 AND THE RIGHT!
Posted by fink the mad-sad groundhopper at 12:00