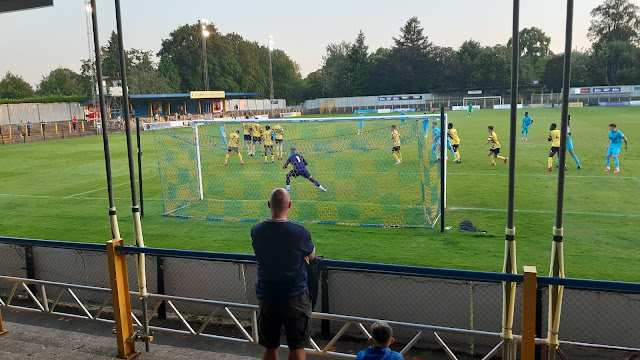 On arrival, aa heeded for The Royal George near Euston station for a few 'gargels' with 'The Colonel', who had travelled from Bracknell in Berkshire for the game! 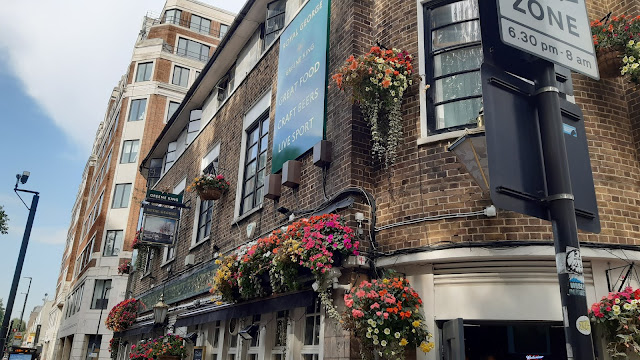 It woz soon time to heed for St. Albans where Watford U23s are playin' their resorve games----We had 'e-tickets' doonloaded on wor phones and got through the gates at St. Pancras with nee problems---but when we got to St. Albans City station 20 mins later, 'The Colonel' couldn't find hiz ticket on hiz phone and it took him a grand total of 10 minutes to get through the gates, with a lot of help from the ticket collector who woz mannin the gates! (The new 'normal'!)

We heeded for a boozer caalled 'The Horn' which woz ower the train line from the station, where we met 'Blondie Alan the Morris Dancer' 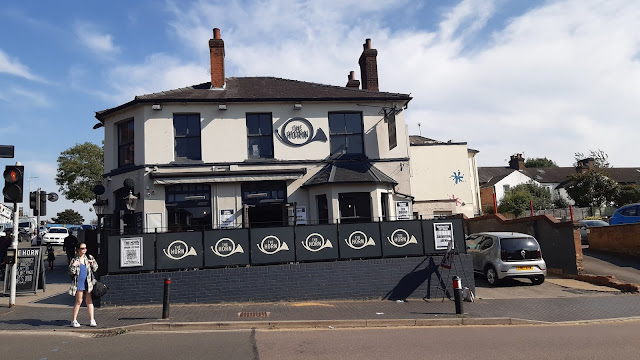 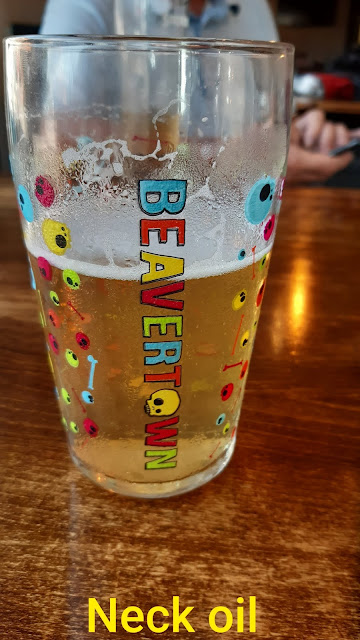 'Dave from York' and hiz sidekick 'Alex of St. George' then torned up to be ripped off az well!

We decided to 'move on' to the boozer doon the road caalled 'The Robin Hood', where the 'lubrications were £2 cheaper for pints of 'Harvey's bitter' (That's £4 cheaper for my roond!--Ha! Ha!) 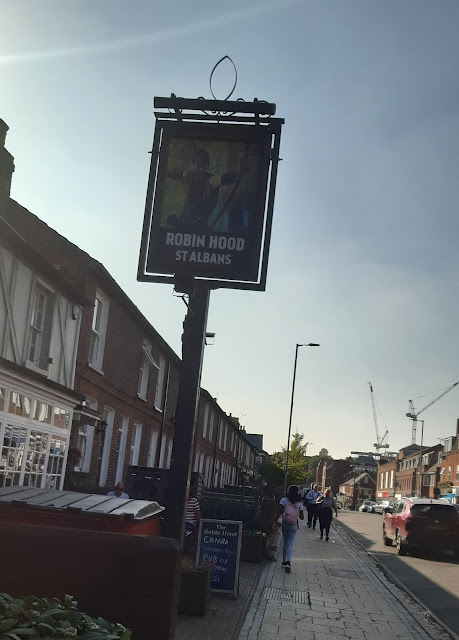 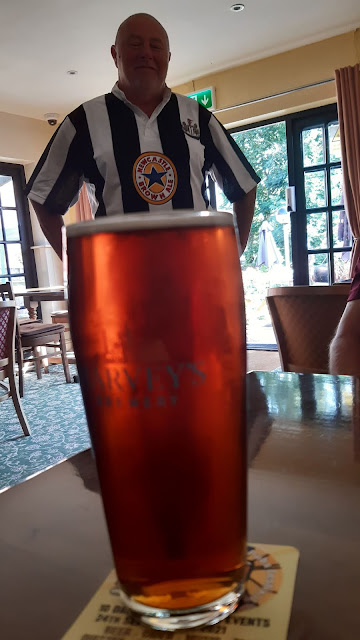 OPTICAL ILLUSION!---A TOON FAN INSIDE A PINT OF HARVEY'S BITTER!

It woz then 'onward' to Clarence Park, which woz a 10 minute waalk away!---The sun woz shinnin brightly and the temperature woz nearer 30 degrees in the bakin' heat!

'Glennn from Ashington' then appeared and he iz 'the leader' az far az NUFC groonds are concorned, with ny on 400 to hiz credit, includin loads with the NUFC U18s on trainin' groonds! (So he iz actually 'sadder' than me!)

There woz still time for a quick 'gargel' in the clubhoose, so (az yi dee!) that's where aa heeded!

And it woz virtually deserted! 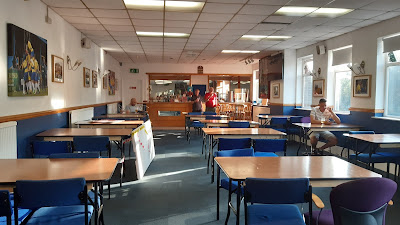 Anyway!---the game kicked off and there were actually more Toon tops than Wotfaad top in the shirt sleeved crowd! (see photos!) 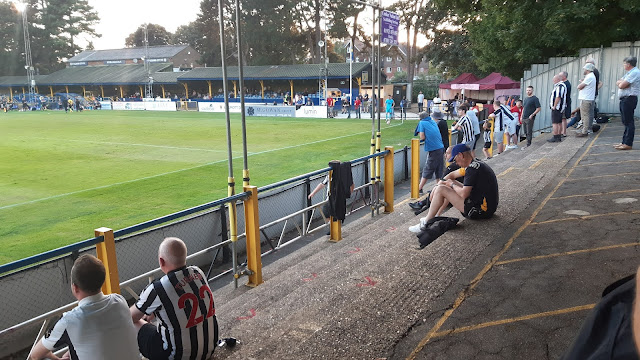 The Toon were playin in an aall light blue strip like Man City's, but sadly, wor performance woz a million miles away from the Mancunians!---Wotfaad, playin in yellow and black hoops, made aall the orly runnin' and had hit the post at the middway point of the half, az The Toon struggled to get ower the halfway line az we attacked the far goal from us! 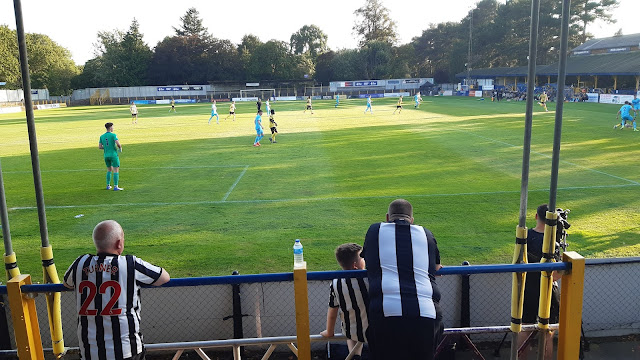 A free kick for us summed the half up, when the baall woz booted towards the sideline and kicked into touch by another Toon player

It seemed anly a matter of time before they scored and of course they DID in the 33rd minute when Pochettino fired home! (The son of 'yee naa who'!)---They soon doubled their lead through Forde who gave Max Thompson in the Toon goal 'nee chance' with hiz effort! 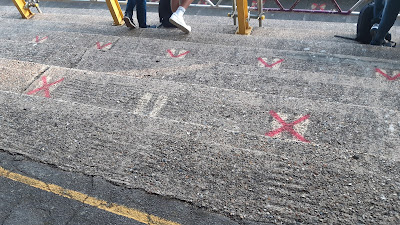 Nee standing on the red X's---a sign of the times!

With The Toon attackin (wait for it!) 'The Conker Nation Limited Scaffoldin' Services Stand' (see photo below) in the 2nd half, (where we were housed) we were given a 'life line' when in the 47th minute, Wotfaad's Agyakwa woz sent off for an illegal challenge on Bondswell! 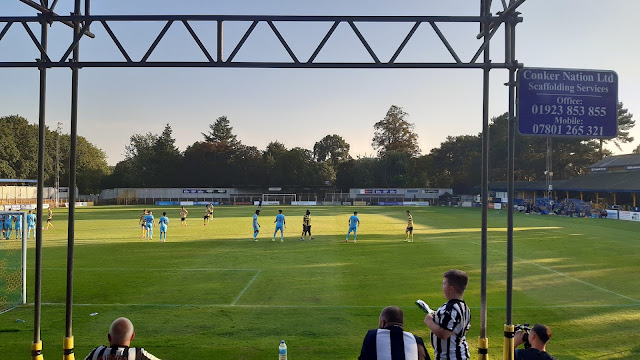 However it made little difference and apart from a few flurries into the opposition box, we couldn't make the breakthrough and Wotfad's 10 men held on to claim the 2-0 victory!

This half woz summed up when NUFC had a throw in on the right touchline near the 18 yard box and we gave the baall straight to a Wotfaad player! 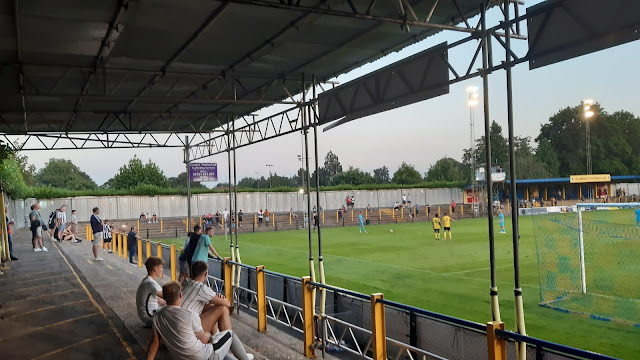 This woz a shockin' performance from us and not one of the players on the pitch have ANY chance of breakin' into the forst team!

We were booked on the '10 bells' train back from King's Cross.

There's one thing for an absolute certainty, to be a Toon fan!-- It's a life sentence!---withoot parole!!!! 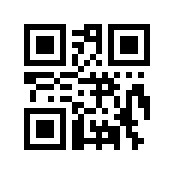