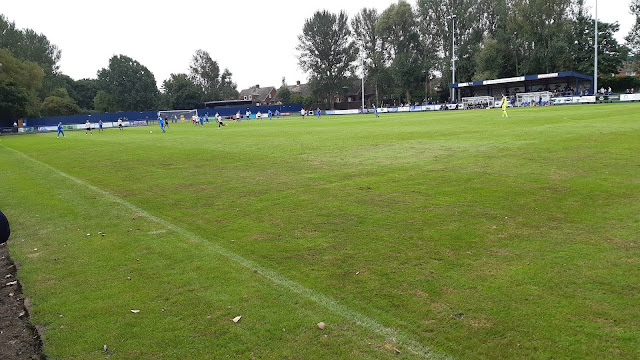 "DUNSTON SUNK BY THE MARINERS, WITH STOPPAGE TIME WINNER!"

With nee Premyaa Leegue futbaall ower the weekend coz of the International break, we heeded for Dunston's groond (or shud aa say 'clubhoose!) for some liquid lubrications before kick off in an FA Cup 1st qualifyin' roond game, where Dunston were playin Marine from Liverpoool!

The clubhoose woz canny full, so aa predicted that the crowd would be aroond aboot 350!

Anyway, the game kicked off and Marine went on the attack at The Tea Hut End and nearly scored orly on, az the Dunston goalie made some great stops! 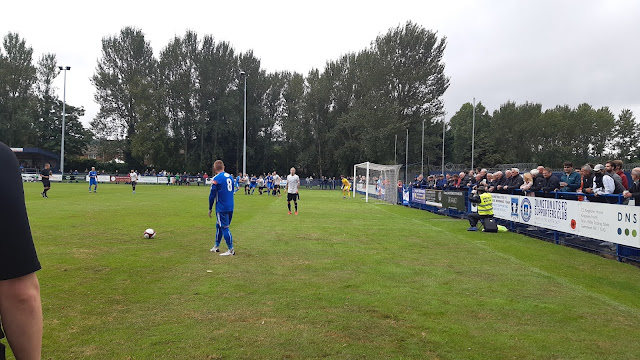 It woz gettin' near half time--and az it woz my roond, aa heeded to the clubhoose to join the queue at the bar with the score still 0-0!

Az aa woz waitin to get sorved a loud roar came from the groond---The Bad Blue Boys had taken the lead against the run of play---and aa missed it!!!!! (Just my luck)

Apparently it woz a great strike from Dunston's Jack Elliott, to give them a 1-0 lead!

The 2nd half started and within a few minutes Marine had equalised at The Dunston Rocketless End through Barrigan (There used to be a tower block that looked like a space rocket not far from this end---now demolished!)

Just when it looked like the game would gan to a replay, disaster struck deep into stoppage time az the visitors from Liverpoool won it with a shot from Wignall, who woz 4 yards oot, to the delight of their dozen or so fans behind the goal!

There woz hardly time to kick off, before the ref blew for full time!---a sickener for The Bad Blue Boys, az the Wembley dream woz ower, for another season at least!

We heeded back to the clubhoose to drown wor sorrows! (any excuse for a few a few more 'gargels'!) 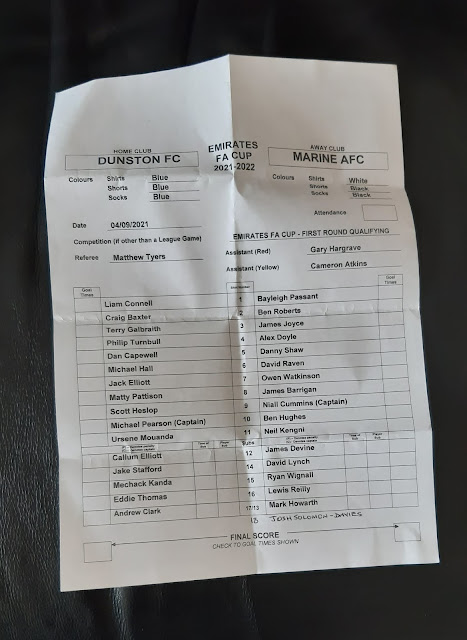 But that woz 361 fans more than Marine got against Sporz in the FA Cup last season, az the game woz played behind closed doors of course, coz of the pandemic!

Posted by fink the mad-sad groundhopper at 12:15