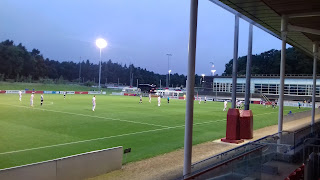 We set off from Tyneside in a convoy of 'car' with Biffa the Beer's car at the front (and back!)  We heeded for York to pick Dave from York and Alex of St George up where we swapped cars and went doon to Burton in Dave's
On arrival at the St George's Park complex 4 hours after leavin Tyneside we spotted a fellow saddo by the name of Glennn from Ashington, waalkin towards the main entrance

He'd travelled doon by train and had waalked more than 5 miles from Burton to get there!
Suprizingly there were ne security checks to get in and we simply drove straight past the many pitches scattered aroond the complex and parked up!

With not a bar in sight we reluctantly settled for cups of coffee and sausage rolls on sale ootside 'pitch 6', where the match woz takin' place an hour later!
A huge indoor hanger with pitches inside woz next to pitch 6 and we were telt that Alan Shearer had a pitch named after him 'next door' (pitch 8)
'Blondie Alan the Morris Dancer' then torned up to make it a 'super six saddo' contingent who had made the jorney doon!

Stoke iz some 30 miles distant from St George's Park and seems a strange venue to play 'home games' for them and so it prooved az  the number of fans at kick off time woz less than 200 in this 499 capacity groond-situated on the side of the pitch with grass banks aroond the rest! (I assumed that the stand must have 499 seats?)

We started off well and took the lead at The NUFC Team Bus End (where  the team bus woz parked!) through Liam Smith in the 5th minute with a side footed effort in the box
We dominated play aftaa this and shud have had more, but it took until the 40th minte to increase wor lead when a Barlaser shot woz parried oit by the Stoke keeper to the feet of Charman who fired into the net.
Stoke pulled one back  dead on half time against the run of play through Javis!

Then disaster struck in 2nd half when through Javis and Barbir Stoke took the lead for the fost time and aall looked lost az they piled on the
pressure!
BUT! we wornt finished az sub Sangre shot into the roof of the net from a Barlaser pass to level things in the 81st minute at The Alan Shearer Pitch End!  (Where Shearers pitch woz situated---It HAD to be folks!)
And then 'utopia' 4 mins later when anotha supersub by the name of Gallacher ran through the Stoke defence and hit a shot which richoshaded off the near post and into the goal to win the gameaz the six saddos who had travelled doon celebrated  wildly!

The new ABBA penalty shoot rules had been applied--- only in this case it woz the AABBBAA effect! (Get it?)

Posted by fink the mad-sad groundhopper at 13:21