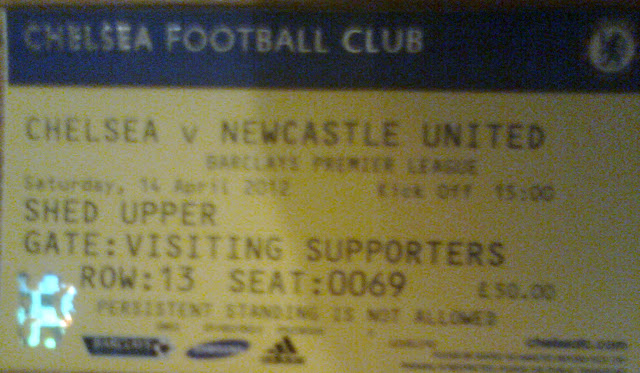 "Sing in the cheap seats!"
(note the wrang date on the ticket!)

Stamford Bridge doon the Kings Road iz the place to be toneet @ 7:45 bells' where a Champions League place iz up for grabs in wor final trip to 'the smoke' this season!
'Wor bags are packed and we're ready to go' (az the old song gans) ("Er!"---packed with cans of 'liquid lubrication' that iz!) for the three hour 'sorte' to Kings Cross and we are due in to the capital of sleaze @ aroond 'fower bells' this afternoon

Anybody who thinks we are in for a hidin'----COULD be reet!---or! on the other hand!---we played them TWICE last season doon there and won one! (in the League Cup) and drew one! (in the Premya)

Who's to say that they wont have their minds on Saturdays FA Cup  final against The Liverbirds instead???

Anyway!--@ FIFTY quid a ticket it isn't cheap, but reeely we shudn't grumble az Man U fans, for example, had to pay SIXTY SEVEN quid to get in! (category 'AA' apparentleee---compared to wor category 'B' price!) (watch oot for a 'price hike' next season if we ARE in the Champions League!)
We'll be in 'The Blackbird' near Earls Court tube station before and after the match if anybody fancy's a 'gargel' with us!?

Full match (and waaterin holes!) report to follow sometime on Thorsday when we get back!
Posted by fink the mad-sad groundhopper at 21:05