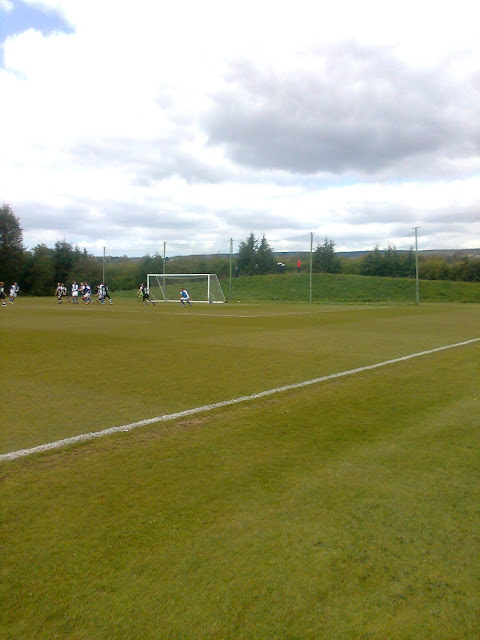 The convoy of cars from Tyneside arrived in Brockhall Village near Blackborn for this Under 18s semi final clash @ Blackborns trainin’ ground complex for the prize of a place in the National final.


(“Er!”—the ‘convoy’ consisted of ‘The Caped Crusaders’ ‘Batmobile’ and ‘Blondie Alan’s’ Ford Fiesta with six saddos inside in total in the two vehicles!) (includin’ little ol’ me!)


The game waz bein’ played on the site of a former lunatic asylum! and the ‘six sick saddos’  were here to clock up a new ground to add to wor ‘list’ on the never endin’ trail!


A bit of useless information!: >One of wor number, namely, Michael, had even travelled back from a months holiday in India for this one (“er!”—he actually got back a week before!) and he telt us that he did a boat trip up the sacred river Ganges where dead body parts were floatin’ past az they made their way upstream (whey!---the body parts wouldn’t be alive---would they!?)


ANYWAY!---The game started @ 12:30 bells and The Toon kicked off in the direction of the changin’ rooms where the old asylum used to stand (so we were telt!)


At the other end there waz a smaall hill behind the goal where Peter Beardsley and some of the coachin’ staff positioned themsels for a better view (behind some nettin’!)


However! The Toon Under 18s never got oot of the blocks and the home side took the lead after just two minutes play when Toon goalie Jonathan Mitchell dropped the baall after wot looked like a foul on him, but the officials waved away any protests az O’Sullivan tapped the baall into the empty net for the home side.


They then dominated for lang periods and doubled their lead through O’Sullivan again just before the half time interval, with The Toon havin’ ne answer in reply, az we had precisely NE shot on target in the entire half az they attacked ‘The Nut Hoose End’!<(it had to be folks!)


The 2nd half waz played oot with Blackborn again makin’ most of the play, but with ne fortha score they progressed to the National final where they will play Fulham.


The jorney yem waz spent listenin’ to the results comin’ through on ‘Radio 5 Live’ where the commentator telt us that Hereford (the team we aall love to hate for obvious reasons!) were relegated from the Futbaall Leegue thanx to Barnet’s win at Burton!


THREE CHEERS FOR THEM!

Posted by fink the mad-sad groundhopper at 16:46