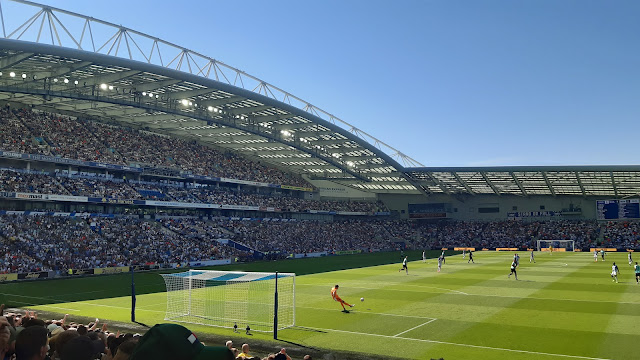 Coz of the train strike on Saturday we were forced to change wor plans and travel doon on the Friday and stop in Leatherhead, just off the M25 motorway!

We got there (by train) at '9:00pm bells' and spent the next hour, walking roond in circles tryin to find wor Travel Lodge Hotel!

We passed it 3 times withoot realising az there woz just a smaall sign on the side of the buildin'!(We must get wor 'mincers' tested!) (Mincers=mince pies= 👀 !)

Anyway!--we dumped wor bags and heeded for local boozers, which were 'dead', before retiring for and good nights 😴 sleep!

Next day 'Sarnie Steve' picked us up in hiz 'jam jar'  (he woz working in Reading) and took us to Lewes where we were spending wor 2nd night away!(A 10 mins train ride to The Amex Stadium)(South West Trains wornt on strike!)

A few liquid lubrications later and it woz time to heed for the match!

The temperature woz in mid 30s az the game kicked off! 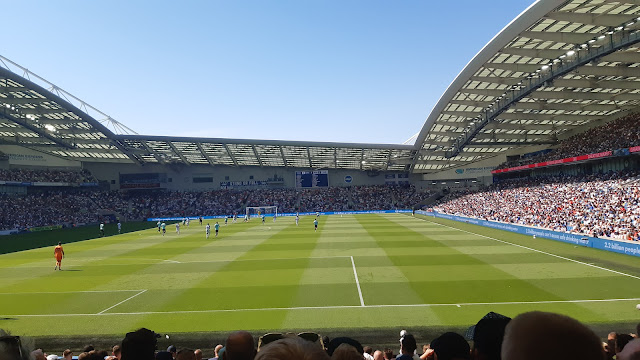 It woz obvious from the 'off' that Brightin wanted the 3 points and they missed several good chances to take lead, but were thwarted by 'The Pope' in The Toon goal and Kieran Trippier who cleared a shot of the goal line!

NUFC simply couldnt get oot of 'the blocks' and struggled in the searin heat, az we attacked the far goal from us in the forst half! 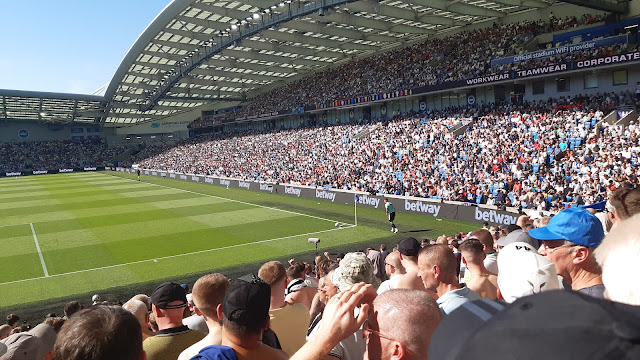 Callum Wilson DID score a legitimate goal, but it woz chalked off for high kickin, even though he wozint close to a Brightin defender!?

Again in the 2nd period we struggled and just couldn't get gannin az the home side again missed some good chances to open the scorin! 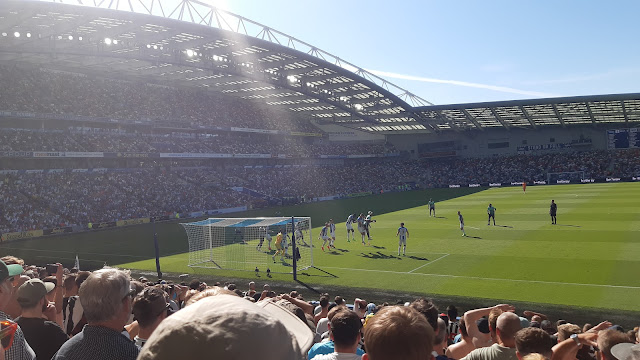 We DID have a few chances near the end , but couldnt find the back of the net, and the game ended goalless!(Wor 1st goalless draw for 50 Prem games!)

PS: Cannit fink of any previous game where the temperature woz so high! 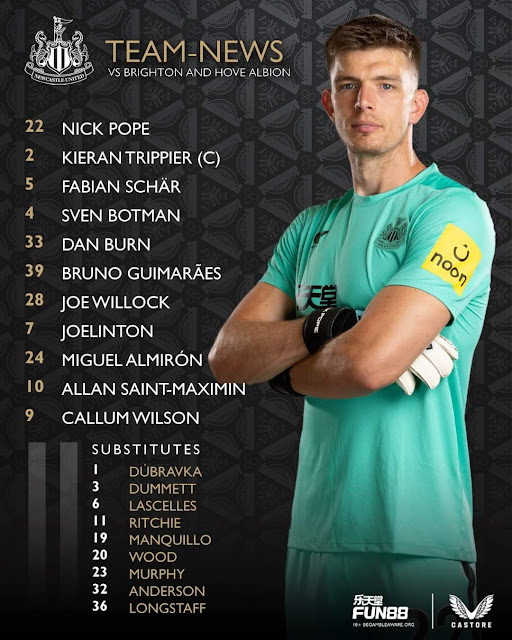 After the match we stayed behind to have a few liquid lubrications in the 'away' and then 'home' bars in the concourses, to let the queues for the trains back to Lewes  die doon!

We heeded for the train an hour after the end of the game, BUT there were still big queues for the trains back to Brightin and Lewes!  We had to queue for half an hour before boarding the train back to Lewes!

It's a nice stadium in the middle of nee where ! Hence wor name for them  'Nee Where Near Brightin'! 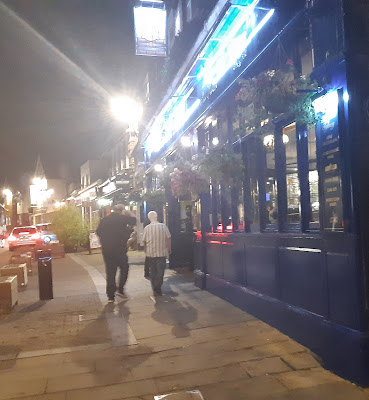 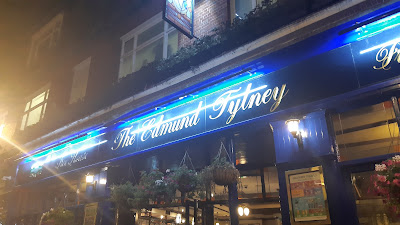 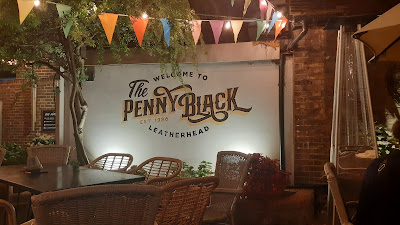 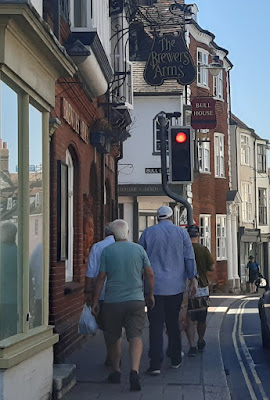 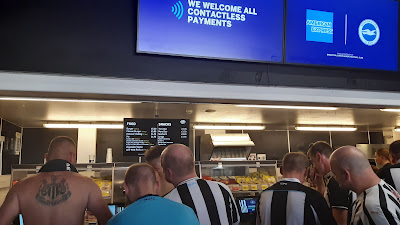 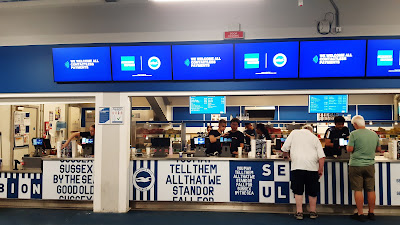 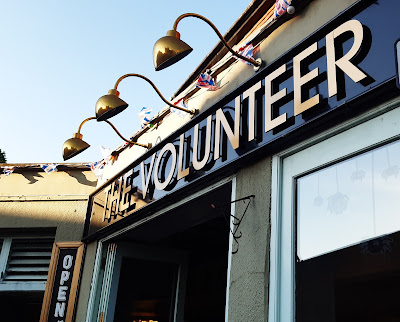 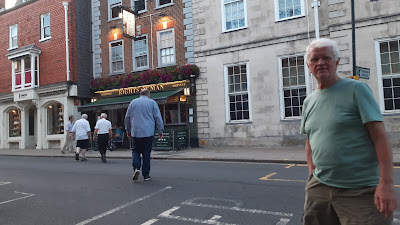 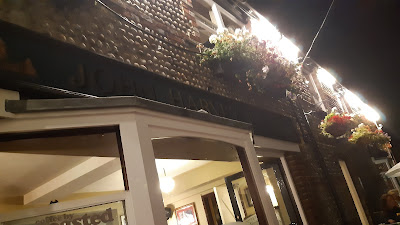 Forst of aall we had to torn aroond on the outskirts of London, az we didnt want to enter the London emission zone coz Steve's car has a diesel engine (£100 fine for high emission vehicles!)---and then got stuck in a massive traffic jam on the notorious M25!---Then, when we needed to gan to a motorway service station for some scran and a 'gypsy's kiss', we got caught in another traffic jam inside the services!

Then there were 2 accidents on the A1M in north Yorkshire, which shut the motorway, so we had to divert via York and the A19!

We'd left Lewes at '10:15am bells', but didnt get back to Tyneside til '6:45pm bells'---a torturous jorney of 8 and a half hours coz of the train strike! (Even though there were trains runnin on Sunday, we hord that it would be chaos to get back az the trains would be in the wrang place, coz of the strike on Saturday!)  So back by road we came! (The 350 mile jorney torned oot to be nearer 400 coz of the diversions!)

THE JOYS OF FOLLOWIN' THE TOON AWAY!