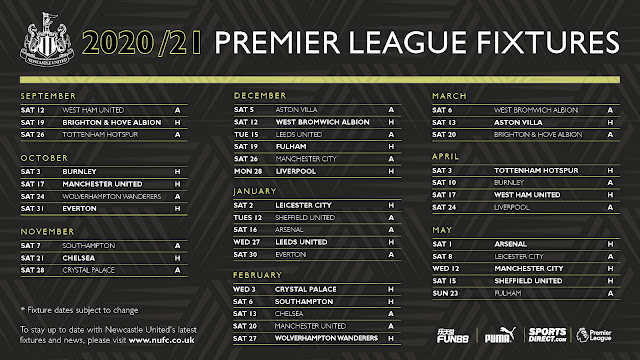 The fixtures for the new season have been released and we are NOT playin' Leeedz away az reported by some tosspot!

Wor forst game IZ away, but 200 miles forthaa south, in west London against The Jellied Eels Mob of West Ham!

Then wor forst home game v Brightin, which will again be in an empty stadium, followed by anothaa trip to London to face Sporz at their new abode (Thankfully 'The NUFC mad-sad groundhoppers' were here last season in wor forst ever visit to Tottenham Hotspor Stadium!)

And then in October, hopefully some fans will be allowed to see wor home games v Bornley and Moan United----But with an estimated 15,000 season ticket holders admitted, just who do they say will be able to attended az we have ower twice that number of ticket holders!?

A Wolves away game follows, but we fear that NEE away fans will be allowed for the foreseeable future!

Posted by fink the mad-sad groundhopper at 18:05