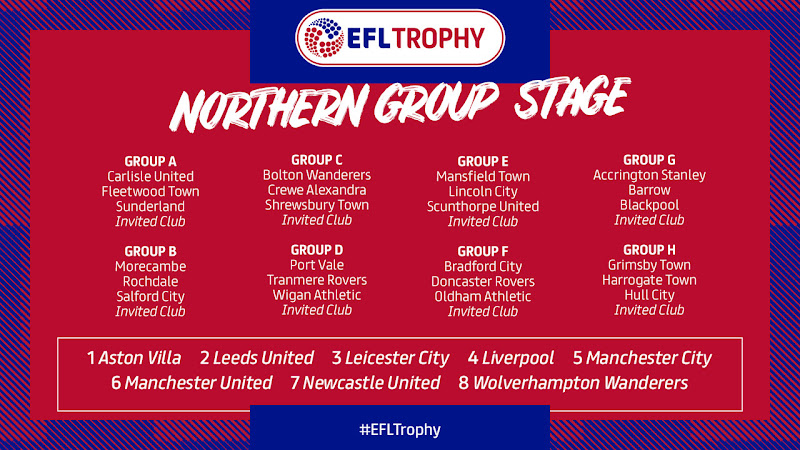 Tomorrow afternooon at '1:30 bells' the group draw for the EFL Trophy will be made on Talksport for the Premyaa Leegue sides who have entered it.

The northern groups have aalready been drawn for the lower leegue minnows (like the smb!)

There are 8 groups in the northern section, with 3 lower leegue clubs in each group, plus an 'invited' club from the Premyaa!

We can't be in group A coz the mackems are in that one and we will be kept apart til the knockoot stage!

Fleetwood are in that group and it's a huge sigh of relief that we wont play them, coz it might still be behind closed doors and 'The NUFC mad-sad groundhoppers' have never been there before and would miss a new groond, if it woz possible to draw them away!

However!  The anly othaa team in the northern section of the competition where we have never been tee, where we could gan, is Salford, who are in group B

If we draw them away, then there iz a good chance that we wouldn't get in, which would ruin the NUFC groundhoppers new grounds records, (gannin back 41 years in my case!)(Since I missed an NUFC game on a new groond!)

Of course fans might be able to gan to games in the near future, but with the 'bat out of hell' virus still active, this could aall change!

We will let yoo naa just which teams we will be facing as soon az we find oot!

Az per usual "Watch this space!"

Posted by fink the mad-sad groundhopper at 20:08