It was impossible to get the train doon on the day of the game and mek the kick off as it was a 2 bells Sunday start for the telly (surprize---surprizzzze!) so we opted to fly instead on the Saturday mornin’ and aa arrived at Toon airport in plenty of time for a few ‘gargels’ in the airport bars.


The friendly barmaid asked where aa was heedin’ for and aa telt hor aa was flyin’ to Bristol.


‘The Caped Crusader’ then made his entrance and aa asked him wot time the flight to Bristol was.  He looked at me with incredulity◄(wot ever that meens?) and then replied “Wih not flyin’ to Bristol---wih flyin’ to Cardiff and then back from Bristol coz that’s the anly way we can de it!” (az yi can probably guess----aa did’nt book the flights!)


After a couple of more gargles, ‘Big Al’, (not! the sheet metal workers son!) ‘Sarnie Steve’, ‘Jimmy the Gaffer’, Russ’ and ‘Mal from Durham’ torned up and it time to catch wor flight to the Welsh capital.


Wor digs were in Bristol so on arrival at Cardiff Airport it was off on a bus to central Cardiff and then a train to ‘yee naa where’ via the Severn tunnel (the bus jorney took an hour which was actually langer than the flight!)


Some of the ‘very sad groundhoppers’ amongst us decided to get off the train at Newport to take in a game and add to their ‘non Newcastle groundhoppin’ records’,while the rest of us heeded for Bristol to dump wor bags at the hotel and gan ‘on the hoy’! (aa refuse to gan to any new groond unless The Toon or mee local club Dunston Fed are playin’!)


After much street wanderin’ we eventually foond a boozer and settled doon for a few ‘liquids’ as Spurs were playin’ Man U in the teatime game on Sky.


The bar was canny full as the match kicked off and within a few minutes Spurs scored to a muffled cheer from a handful of the punters. However!!!---when Man U equalised a huge ‘gloryhuntin’ roar enveloped the pub and for a moment aa thought aa was in central Manchester and not central Bristol!!!---it was unreal!---is it any wonder that Bristol Rovers and City have such poor support for the size of the place (Bristol is aboot twice the size of Newcastle) when the locals jump on the Manchester gravy train! (ne wonder they’re hated so much!)


Anyway!—the Mancs won 3-1 (much to the delight of the Bristolians!) and we ended up dein a ‘toby’ aroond the rest of the bars for the neet time session after joinin’ up again with the ‘hoppers’ who had visited Newport Coonty’s groond.


Next day was match day of course and after a rather large ‘help yersel buffet breakfast’ in the hotel (well TWO actually!---as aa was feelin’ a bit peckish!) it was back to the station roond the corner from the hotel to catch the orly train back to Cardiff via the Severn tunnel again.


Cardiff fans of course do have a reputation and we did’nt naa wot to expect when we arrived there so it was a pleasent surprise to find that there was ne hassle as we heeded for the forst waaterin’ hole not far from the station. (another reason was that there were a canny few radgy Toon fans knockin’ aboot and locals mustn’t have ‘fancied it’!)


A few gargles later and it was time to hail a black cab and heed for the stadium which was a fair hike away. (a twenty minute waalk!)


The spankin’new groond was within hocklin’ distance of their aad ‘shabby’ Ninian Park groond which was just ‘ower the road’ across a tree lined park. The aad groond was yet to be bulldozed and was still standin’, albeit with a few windows smashed and tiles missin’ from the main stand roof  (soon to be torned into a hoosin’ estate we were telt) 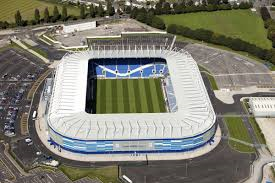 The stadium predictably was the same sort of design as many of the new’ins, although to be fair it did have plenty of room inside the concourses and the ‘tool-sheds’ were big enough to accommodate the ‘Toon Army weak bladder brigade’, unlike some of the other nettys where you are crammed in like sardines and end up ‘havin’ an impromptu  ‘slash’ on someones ‘skeets’ who is standin’ next to you!.


The Toon had a followin’ of 2,000 in the ‘alleged’ selloot crowd, but!--- there were plenty of empty seats in the main stand opposite us as the game kicked off? which brought the predictable ‘empty seats’ chants from wor lot


The Toon started off at a roarin’ pace and this paid off in the 18th minute when lone striker er! ‘The Lone Ranger’ heeded a cross back across the goal to Ryan Taylor who then lobbed the baall to Coloccini who in torn heeded an unstoppable effort past the ootstreched Marshall in the Cardiff goal to give us the lead. It was the Argentineans forst goal in 43 starts and did’nt he celebrate!---(and so did we of course!)


This was the way it stayed till half time and in the second period the home side tried in vain to hit back but we battled away and held on to take the 3 points. That was 5 wins on the bounce and 5 clean sheets as well, which was a new club record. (well done lads!)


The anly sour point was the sendin’ off of Alan Smith deep into injury time for a second bookable offence, but it was a happy Toon Army who left at the end of the game.


We then made wor way back to the station to catch the train back to Bristol (again!)  and heed through wor ‘fave tunnel’ for the thord and last time.


A Toon fan caalled ‘Scud’ who was on the same flight as us, telt us that the Cardiff fans  could’nt believe that the Toon fans had waalked aboot in their black n white tops, as ne away fans dared de that for fear of bein’ ambushed. ‘Scuds’ answer was short and straight to the point---“We’re Geordies mannn!”, he replied to the bemused Welshman!


Aa later foond oot that the reason the main stand had unsold seats was because Cardiff were chargin’ £ 65 to sit in them!

Posted by fink the mad-sad groundhopper at 16:18