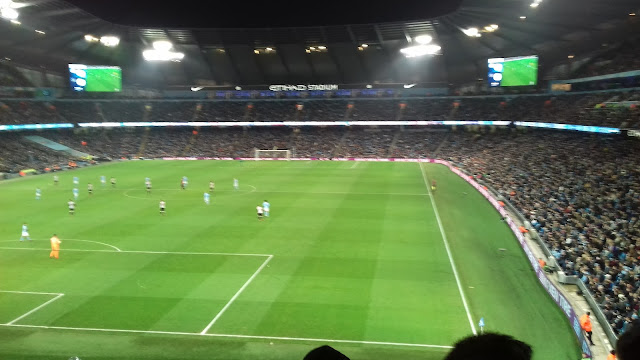 VIEW FROM THE 2nd TIER OF THE SOUTH STAND

After just 3 hours 'shut eye' after workin nightshift aa dragged mee lifeless body oot of bed and heeded for 'the Central (station) to catch the '9 bells' train to Manc-land via 9 other stations and eventually arrived 3 hours later
It woz there a case of findin wor hotel (above a pub!) before gannin oot 'on the hoy' before the match which kicked off at '5 30 bells'
The last time we were here we lost 6-1 and az Man City are miles better than any othaa team in The Premyaa Leegue, we had visions of a similar scoreline, come '7 15pm bells' (when the match woz due to finish!)

To compensate for this aa had drank 4 cans on the train and several more in central Manchester before the game!
It woz eventually time to gan for wor 'punishment' and we pushed wor way onto a very crowded tram to the groond!

We played a bit better in the 2nd period and actually ventured into the City half this time, but fell 2 goals behind when Aguero scored from the penalty spot after Manquillo fouled Stirling in the box in the 62nd minute! 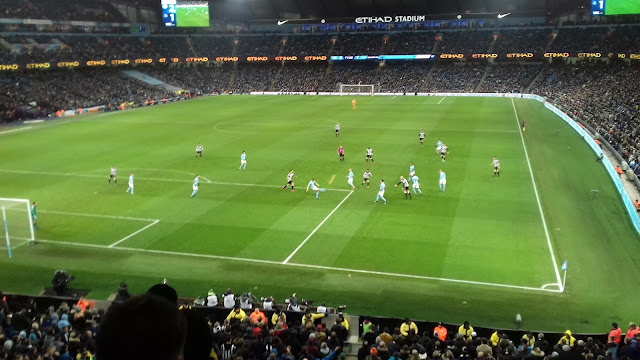 We pulled 1 back a few minutes later when Murphy got clean through their defence to calmly place the baall into the corner of the net to send the 3,000 Toon diehards behind that goal, wild with delight! 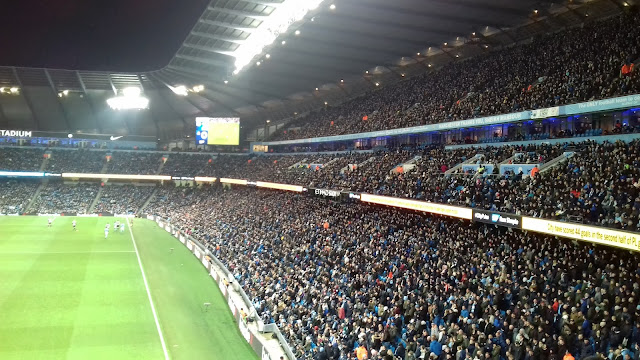 We had chances to equalise but couldnt break their defence doon again and a 3rd goal for Aguero to complete hiz hat-trick came in the 83rd minute to seal wor fate! (at least it wasn't 6-1 !)

Factfile: The Blue Moonies have now scored 22 goals against us at home in the leegue in the last 5 games played!
NUFC in the meeentime have scored 2 against them!

NUFC are now just 2 points off the drop zone and 3 points below the top half of the table!----Unreal!!!

A more detailed report to follow when we eventually get back on wor train jorney aroond the world via Stockport, Sheffield, 'Donny' and York! (PS: now updated--eventually!)

For wor "Lets gan on the bevvy in Janu-ery!" pub crawl, see next post doon!
Posted by fink the mad-sad groundhopper at 11:13