SOOOTHAMPTON v THE TOON *** SUNDAY AFTERNOOON! (WHEN ELSE?)

Despite assurances that live telly games up until December 18th would be announced yesterday (Thorsday), this HAZZENT materialised <(we naa aall the big words!) which leaves us in limbo once again az we (of course) cannit book trains or hotels until we naa when the games are bein played!

We play in Sooothampton's fairly new 'Lego Stadium' (see photo and compare to a Lego model!) in the St Mary's district of the toon (hence their nickname of 'The Saints' and name of the groond!)
NUFC will have the backin' of a MAGnificent 3,200 fans in The Norham Stand, despite the distance involed and timin' of the game
(It woz sold oot weeks ago!) 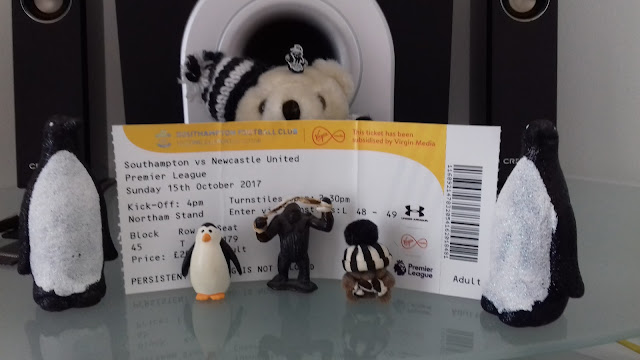 WE travel in confidence rather than trepidation az we find wor feet in the top half of the top flight and hopefully we can pick up at least a point and possibly 3!
Haidara and Dummett are both still knackered, but Atsu,Shelvey and Richie look likely to play after various injuries!
This iz wor 10th visit to St Mary's where we have lost the last 4, scorin just 1 solitary goal in the process!
Wor last win here woz back in 2004 when an own goal and a shot from Stephen Carr (remember him?) gave us a 2-1 victory

Mikel Merino, who haz been on loan from Borussia Dortmund haz nuw signed a porminant deal for a reported £9 million quid, which iz great news az he iz a canny player!

For a match report (of sorts) and pix see 'Geordie Times' sometime on Sunday neet when we are travellin back on the train from Soothampton via King's Cross (London)
------Az per usual---watch this space for forthaa updates!

PS: Mee forst ever visit to Sooothampton woz some 48 years ago in February 1969----'The Dell' ('Ground number 8')---and av 'dug the archive match report up from that game and one from November 1984 which are printed below!

Posted by fink the mad-sad groundhopper at 12:14