"A MARRAIGE OF CONVENIENCE!"

Mee forst thoughts when ah hord aboot this fixture on Biffa's 'pirate website' was that at last a'd get tih gan there after missin' oot some twenty years before, when The Toon had sent a resorve team up to the Scottish borders.

The reason ah missed the game aall those years ago was because ah was'nt intih 'groundhoppin' mode' back then and ah did'nt gan tih many away friendlies anyway!

Ah can remember phonin' the NUFC switchboard up tih find oot if they were sendin' the forst team up or a resorve XI.


A'd decided tih gan if it was a forst team game but NOT if it was the 'stiffs'.


Me: Are the forst team or the resorves playin' at today?"


Lassie: "I did,nt know there was a game ON!, can you hang on a minute and I'll find out for you!"


Before shih had time tih convay the message back to iz, ah piped up: "Ah hord what he said pet!, thax!", and put the receiver doon!

That was it then!----it was a day on the 'liquid refreshment' in the Toon for the dinnertime session with mee mates and then a slow waalk tih the nuw demolished 'Black 'n' White' in Blenheim Street for the 'customary' afternoon 'lock in'!


(Divvint forget! (if yer aad enough!) that the 'waaterin' holes' used tih shut between 'three and five thorty bells' in them days and if yih wanted a 'gargel' 'in between', the 'Black 'n' White' was the place tih gan!)


Originally a'd planned tih gan wih 'Grumpy Stumpy' on the train, but on the mornin' of the game he left a message on mee answer phone sayin' that he was'nt gannih bother coz he was 'cream crackered'.


(NOT! with the ale the neet before but with his reet kneecap which had swollen tih the size of a lemon!) (SOME excuse???)

This meant ah had tih mek other plans so ah phoned 'The Caped Crusader' who telt iz he was gannin up on his aan in his 'jam jar'---so! (az yih de!) ah cadged a lift!


Gretna Green of course, iz famous for 'shotgun weddings' and sometime later we arrived at the Scottish border on the ootskirts  on the village (via Hadrians 'Breeze Blocks'!) and were greeted at the forst roondaboot by an aad Volvo with white weddin' ribbons tied in a 'V' shape tih the bonnet.


It had a different coloured front passenger door tih the rest of the car (rust!) and the bride who was sittin' in the back looked a bit 'rough 'n' ready' tih say the least! (just like the car!) and she was obviously on a 'budget weddin'!


The groond was half a mile further on in the (withoot the 'Green'!) and it torned oot tih be a 'one street town' with three pubs/hotels, two of which were holdin' (aye yeev guessed it!) weddin' do's! (one blink of the eye and yee were through it!) 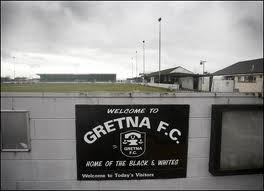 The groond was on the left and there was a social club next tih the car park which was within 'hocklin' distance' of the tornstiles! (very convenient!---eh!?)

Surprizingly there were ne other Toon fans in the bar (this was at one pm bells?) but there were a few locals in the corner havin' a bit 'chin wag'.


One came up and asked how many Toon fans were comin'.

Aboot qwaata of an hour later 'Biffa' from the 'pirate website' and the 'scribe' for the 'Shields Gazette' (can't remember his name?) torned up with a couple of friends, followed by 'Sarnie Steve' and his better half, Margaret. (Mee prediction of twenty 'saddos' tornin' up was gettin' closer!)


Then 'Mark from Morpeth','Byzy from Bedlington' and from 'god naaz where'!? arrived tih give a grand total of ELEVEN 'saddos'! (nine short of mee 'target'!)

The 'scale' of could be judged by the size of the stands.


For example: The goalnets behind the reet hand goal were tied tih the TOP! of the stands ROOF! (such was it's 'height'!) and the bungalows in the street behind the stand where WE 'plonked' worsels, were HIGHER! than the stand itself! (Er!---or at least the chimney pots were!)

Tih add tih the occasion there were fower flags flyin' from the roof haadin' the goalnets up, a Union Jack, a flag, a flag? and a Gretna F.C. flag (but nee f***** flag!) One very obserevant 'hopper' ('' mee thix?) noticed that the Union Jack was in fact flyin' upside doon!-----(NOT! a good omen!)

And so---'it came to pass'---that the game started off badly for The Toon and 'before wih knew it!' we were one nowt doon after qwaata of an hour from a simple 'tap in' by 'one' Marty Cameron. The loudspeaker in the 'Bungalow Stand' (and ah meen LOUD!) then broke into a 'hundred decibel' chorus of 'Tina Tornaz' 'Better than all the rest', which nearly borst mee left eardrum!

After half an hour it got even worse az The Toon went two behind when a deflected shot wrang footed Simon Smith in the Newcastle goal and the LOUDspeaker again broke intih song!---Er!---NOT! 'Simon Smith and his amazing dancing bear'!, by the way!---but!---that swingin' sixties classic, 'Glad all over'! by the 'Merseybeats' (or was it 'Gerry and the Pisstakers'?)

Anyway!--- were certainly 'tekin the P***! by nuw, but just five mins later the Toons' luck changed when defender Chris Gate got what can anly be described az a dubious penalty which was convorted by 'Prize' Guy, tih reduce the defecit tih two-one.

This iz how it stayed till half time, so it was off tih the clubhoose next tih the----(deep breath!)


'The Ewart Engineering (Ltd!) Main Stand' for a 'swift' 'gargel' before the restart!

The clubhoose was decked oot with pennants from 's previous life in the Unibond and Northern Leagues and there were pennants from aall manner of clubs from tih and tih Dunston Fed! (mee local non leegue teem!)

The game had restarted az ah 'made tracks' for the 'Bungalow Stand' once again and I have a confession tih mek!---Ah MISSED Jamie McClen's equalisin' goal az ah waalked from the clubhoose! (SH**!)---BUT!  ah WAS! just in time tih see the baall  HIT the back of the net! (although, like ah say, ah did'nt actually SEE the shot!)


NEVA MIND!---(ah thought)---it was'nt the forst time a'd missed a goal and it certainly would'nt be the last!

Ah nipped in the tool-shed on the way roond and 'Bysy' was at the trough 'haadin' his aan'!


Even the rest of the 'hoppers' could'nt convince him that wi'd scored, so when Lewis 'Prize' Guy got his second and Newcastle's thord after 58 mins he was convinced that it was wor second goal!.

by nuw were lookin' a little 'green' tih say the least! (sic!) and again the loudspeaker kept 'shtum'. (Shame on yoo!)


When Ferrell got wor fourth and 'Bysys' thord with an easy chance just before the end, it completed a great torn aroond for the Toon!


(It took 'Bysy' a whole week tih realize that that we WERE! tellin' "the truth---the whole truth---and nothin' BUT! the truth!")