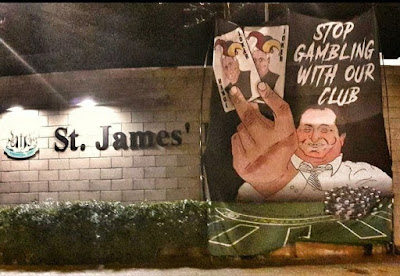 *'Autonimous' meaning: A person or entity that is self controlling and not governed by outside forces!

In the Friday news conference, Steve 'I'm in denial' Bruce said that it woz doon to the players and NOT him for this terrible run of results!

We have won just 2 games oot of the last 16 and wor game v Wolves tomorrow takes on new pressure, az defeat and a Fulim win on Sunday at Palace, will plunge us into the relegation zone!

Lets hope and pray that this isn't the case and that we can somehow beat wor opponents from the west Midlands, az we watch on from wor livin' rooms and bedrooms! (And a Palace win of course!) 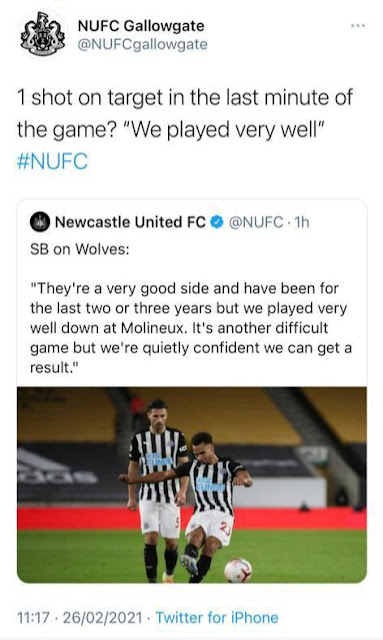 ONE shot on target in the 95th minute from a Jacob Murphy free kick (above), woz wor anly shot of the game at Wolves in the 1-1 draw and we had nee shots at aall from open play!
A MESSAGE OF HOPE!?

Like we say!---it's SO frustratin' not to be in the groond and end up shoutin' at wor tellys and laptops az we watch on!
If anly we could be there to cheer the team on and support them in this difficult time!
Nee doubt that Bruce would get loads of stick az well, if fans were allowed back in!
Tomorrow's game will be the 41st game in a row that we have missed---and very nearly a year haz passed since we last attended a game at SJP!
(29th February 2020 v Bornley in a nil-nil draw! (Wot else!) 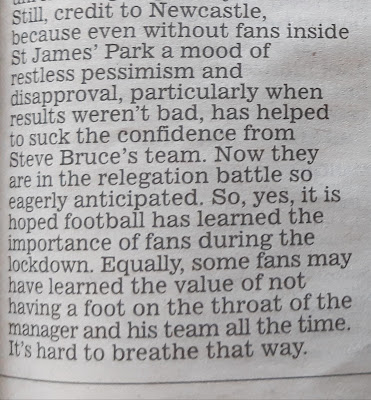 BLOODY HELL! IT'S AALL WOR FAULT OF COURSE, EVEN THOUGH WE HAVVINT BEEN ALLOWED INTO THE GROONDS FOR AALMOST A YEAR!
Updated '10:00pm bells' Friday
Latest news: Goalie Karl Darlow finds oot he haz been dropped  for the Wolves game in a newspaper on Thorsday! 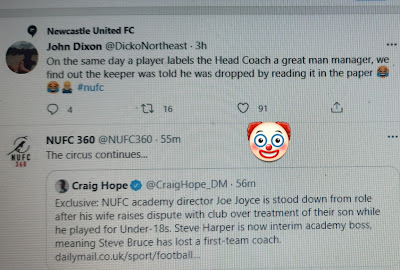 Academy director Joe Joyce iz stood doon after his wife complained aboot the treatment of their son while he played for NUFC U18s!
Posted by fink the mad-sad groundhopper at 00:50