A train to Peterboro at '8:55am bells' from 'The Central' and then onward to Lestaa from there, woz wor preferred route for this game!--A train strike had thankfully been caalled off just 2 days before and we were hopin' for a 'hassle free' jorney to Lestaa and back, az wor previous 3 train trips had numerous mishaps! 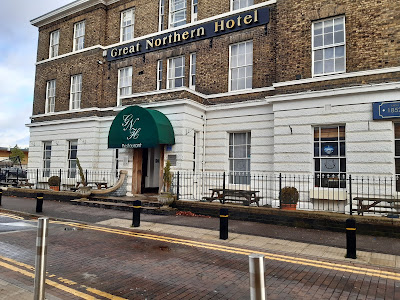 We had a quick 'gargel' in here, opposite |Peterboro station,
before catchin' the next train to Lestaa


We arrived in good time and heeded across the road from the station for the forst 'liquid lubrications' of the day! (Not includin' 4 cans of Woodpecker on the train on the way doon!---plus the short stopover at Peterboro) 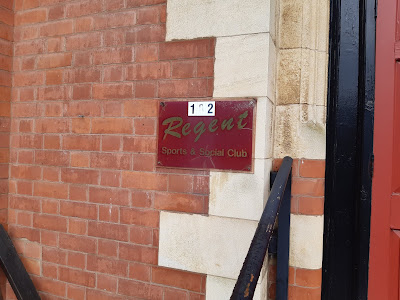 It woz then onward to wor 'fave haunt' roond theeze parts, which woz The Regent Club on the way to the groond!
We left the club anly to find that the rain woz porin doon and were in 2 minds to get a taxi to the ground which woz a 15 minute walk away!----We foolishly decided to walk and by the time we were halfway there we were liked drowned rats!-----A taxi woz passin and so we flagged it doon in deseration, to take us to az near to the away end az possible!

NUFC started off OK and we attacked the end where wor fans were, but it soon became evident that this woz 'a flash in the pan' az Lestaa went for 'the jugular' az the incessant rain poured doon!

The deadlock woz broken in the 16th minute when Perreira strode through wor defence and fired in a shot which beat Dubravka in the Toon goal az it hit the corner of the net!
We lost wor shape after this and in the 43rd minute Hayden woz given hiz marchin orders with a bad tackle on Praet and we were doon to 10 men for the rest of the game!

We were terrible in the 2nd period and it woz nee suprize when The Basil Brush Brigade went on the rampage! 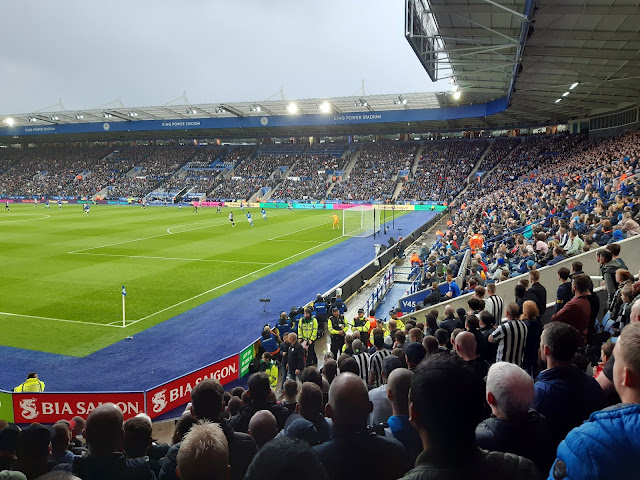 4 2nd half goals 'sunk us withoot trace' az the torrential rain poured doon!----The worst performance here since aa forst went to their old abode in nearby Filbert Street in the orly 1970s!

The dreaded 'R' word iz now a real possibility az we sit 2nd bottom of the table with just one (lucky) win at Sporz after 7 games played!

After the match it had thankfully stopped rainnin' and we heeded back to The Regent Club for a quick gargle before catchin the train back to Peterboro!
The plan woz to have a few pints there before heedin yem--BUT! az we were in Oakham station an announcement came ower the trains tannoy!
"THERE'S A TREE BLOCKING THE LINE JUST BEFORE STAMFORD STATION AND WE ARE STUCK HERE UNTIL IT IS MOVED!" (Yi couldn't make it up!) (Now we know why they call this a 'BRANCH' line (sic!)

After 30 more minutes and the clock 'tickin' to catch wor connection back from Peterboro, anothaa announcement came ower the tannoy!

"RAIL WORKERS ARE AT THIS MOMENT CUTTING THE TREE UP WITH CHAINSAWS AND HOPEFULLY WE WILL SOON BE ON OUR WAY!" (The Stamford chainsaw massacre, perhaps!) (With 'massacre' refferin' to wor heavy defeat!)
But it woz too late by this time to catch wor connection and we finally rolled into Peterboro station just az the 125 train to The Toon woz leavin' on anothaa platform! (We'd obviously chosen the wrang 'root' from Lestaa! (double sic!)

We were stuck there for anothaa hour and after a few 'gargels' in a hostelry nearby, we eventually caught the '11:00 bells' train instead 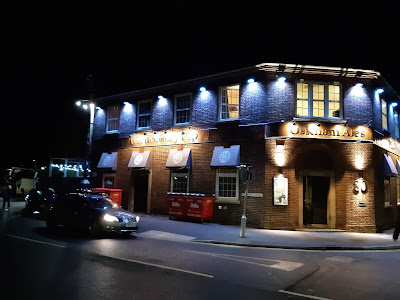 ---arriving back on Tyneside at 12:40am bells' on Sunday mornin'!--some 6 hours after leavin Lestaa!---The FOURTH time in a row that we have suffered disruption on the trains to away games!
Chelski in London iz wor next Premyaa Leegue train jorney away----wot can possibly gan wrang this time??????

PS: 'Broken Nose Bruce's odds at bein the forst Premyaa Leegue manager to be sacked have been slashed from 14/1 to 4/1
* 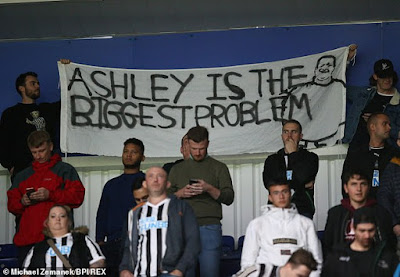 THIS BANNER IN THE AWAY END, SEZ IT AALL!

Posted by fink the mad-sad groundhopper at 14:46