Forst of aall, apologeeez for bringin' yoo this story so lang after the final whistle. Thiz iz because I am still 'cattle trucked' after 22 hours on the road and rail to get to and from Sporz new abode!

With the train line between King's Cross in London and Peterborough closed for engineerin' work ower the bank holiday weekend, we decided to drive to Stockport near Manchester (aye!---STOCKPORT!) and catch a train to Euston (near King's Cross) instead!
This meant gettin' oot of bed at the ungodly hour of '4:30am bells' to make sure of gettin' to Stockport in time to catch the '9:30 bells' train!
It woz then 'onward' to London and we heeded not tooo far away from Tottenham for the pre match gargels in The Brownswood boozer! 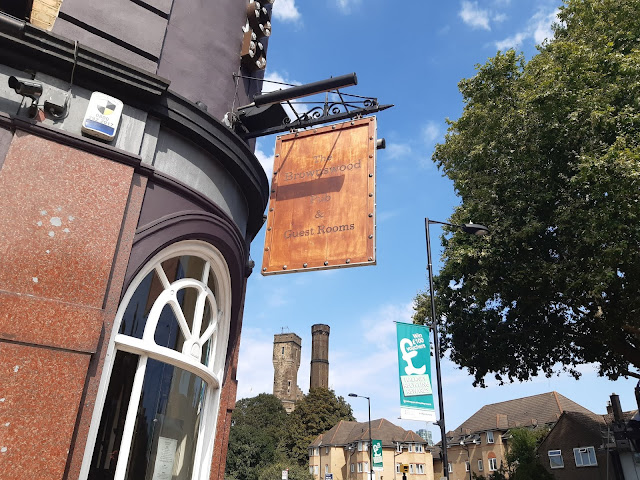 After several 'liquid lubrications' it woz time to heed for anothaa boozer in Tottenham for the final one, before heedin for the brand new shinny stadium, 10 minutes away!
On closer inspection it looked like a giant biscuit tin that had been 'plonked' in the middle of a hoosin' estate, az we approached the away tornstiles!
At the 'stop and search' tornstiles, 'Sarnie Steve' had hiz 'half time sarnies' confiscated  by an over zelious steward and he woz 'non tooo pleazed' I can tell yoo! "The b*stards have nicked mee scran!" he angrily told us az he entered the concourse! (minus hiz carrier bag full of sarnies of course!) He iz now known az SarnieLESS Steve!😂


Anyway!--enough of that!---The sun shone brightly in the scorching  heat of ower 30 degrees as we entered the away end---A massive single tier terrace at the far end and 3 triple decker stands, made the stadium look huge az the game kicked off---the 59th groond that NUFC have played on in The Premyaa Leegue era (includin' Sporz at Wembley and SJP of course!)

A goal from 40 million poond signin' in the 27th minute (hiz forst for us) sealed this game for 'The Orangemen' (we played in aall orange) when Atsu hit a precision pass to Joelinton and he made nee missteak with a left footed effort to score the one and anly goal of the game. 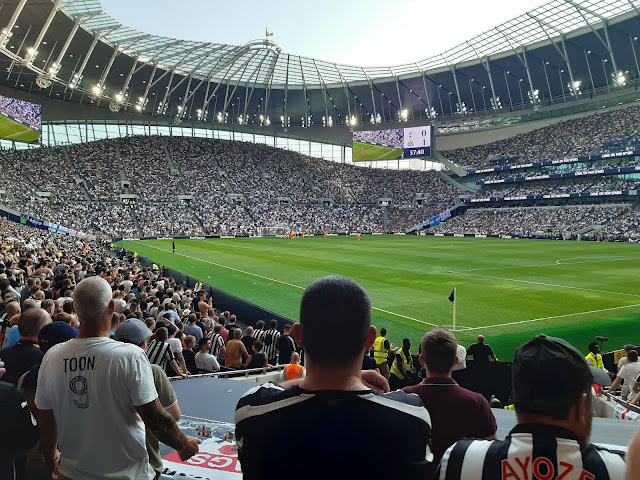 THE SCOREBOARD SHOWS THE SCORE! 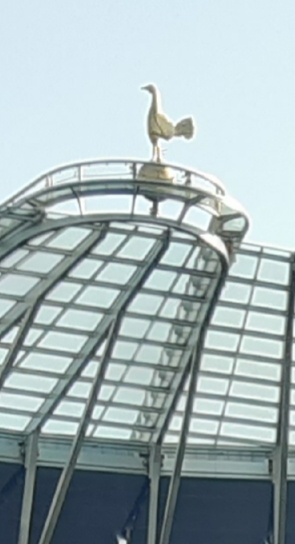 IZ THAT A BIRD ON TOP OF THE ROOF?


This sent the 3,000 Toon fans in the visitors section wild with delight and despite huge pressure from the home side they just couldn't break doon wor resilient defence and we somehow managed to hold on and win wor inaugrial visit to Tottenham Hotspur Stadium, which iz a very impressive venue indeed!

Dubravka made a brilliant stop just before the break from a Son effort and we aall thought 'iz this wor day'?---and it woz az the team who were 11/1  to win actually DID and one lucky Toon fan had a 3 poond bet on the 1-0 win and Joelinton scorin' it---and won £903!

There woz a dodgy moment near the end though when Kane and Lascelles 'tangled' in the box, with Sporz players claimin a penalty!
VAR woz used to see if it woz!  An anxious 2 minutes followed before the decision of 'NO PENALTY' woz given to the delight of the 3,000 faithful, who started singin "V-A-R MY LORD-V-A-R!"  (Brilliant!)

A totally unexpected victory indeed, when many feared a hammerin' (includin' little old me')
"OH WE OF LITTLE FAITH!"

The jorney back woz a replica of the jorney doon via Euston, Stockport and Tyneside and aa got yem at '2:00am bells, nearly 22 hours after gettin' up and woz completely 'cream crackered' from the heat, the hootch and the diverted travel!

PS: Is this the best stadium in the world?---If not, it gans very, very close. Certainly it iz the best away groond I have been to, including' The Nou Camp and The San Siro Stadium!
Posted by fink the mad-sad groundhopper at 12:54