Who wud evaa have believed it!?---NUFC in 4th place aftaa yesterdays games and in a Champions Leegue position, to boot!

An inspirin' display from the black 'n' whites with loads of missed chances in a 100 mile per hour game!
We took the lead at The Leazes End in the 19th minute when Richie crossed a terrific baall which foond Atsu on the back post and he volleyed it from close in with hiz left foot to give the Stoke keeper ne chance!

Joselu then missed 2 great chances to increase wor lead but couldn't put the baall into the back of the net!
We were to roo those missed chances az 'The P*ss Potters of Stoke' equalised 12 mins after the restart through Shaqiri with a pression shot just inside the post!

And then the moment of the game when Rob Elliot in The Toon goal made a brilliant one handed save from a downward Diouf heeder to deny wor visitors an undeserved lead!

Atsu woz then put clean through and woz brought doon in the box---but the ref amazingly waved 'play on' az Lascelles gave the Ref a 'ear full' for hiz missteak! (see photo below)
7 year old Gransdon Jamie then asked me if the ref woz a "Stoke fan!" < (he naaz wot he iz taalkin aboot!) 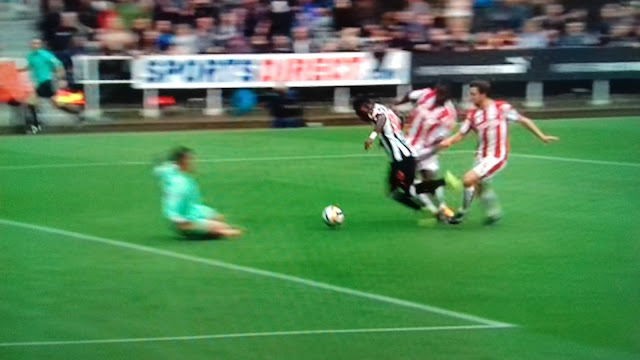 Just after this we won a corner and Richie's centre foond the heed of Lascelles whos heeder went in off the bar 'Geoff Hurst style' az the crowd roared loudly (justice for the Atsu gaff (see The Geordie Times'z excluuusive photo of  the penalty incident!)

Joselu then missed anothaa great chance, but at least he iz gettin' into the right positions, so surely this will bear fruit in the comin' months!

Stoke had a great chance near the end through Diouf, but hiz effort thankfully wizzed past the post and the game woz won!---A great performance from us and a desorved 3 points!
(If anly that North Korean 'toss pot' Kim Jong Un  cud press the  nuclear button to start 'World War 3'  and the season wud end now!)

We then watched Sporz draw in the evenin game in The Bodega, which meant we were above them, The Liverbirds AND The Arse in 4th position aftaa wor thord win on the spin!

They have proved the doubters wrong---including little old 'ME'! 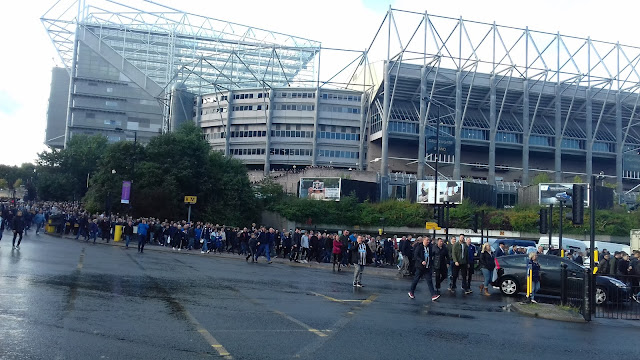 The pre and post match 'gargels' took place in The Bodega, The Leazes End Club, The Irish Club, Tilleys and then back to The Bodega! 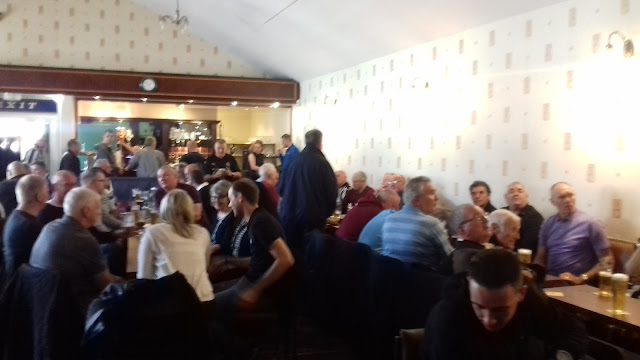 Posted by fink the mad-sad groundhopper at 11:18