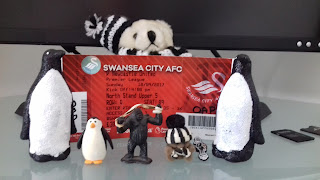 A Swanzee ticket
"Get yours now!"

Wor allocation of 2,000 tickets for wor away game at Swanzee this Sunday have still not sold oot!
Many Toon fans have complained on social media that its unfair for the likes of 'me' to get priority for away tickets under the loyalty points scheme az they cant get their hands on any tickets!
They CAN!   Swanzee ticket are now on sale to non season ticket holders! (ie: Joe Public who haz NEVER been to a game could get one at the ticket office!)
Soothampton away tickets are aalso on sale for those that have 25 loyalty points (thats those who have attended 25 away games in the last 22 years!)

In March 1995 The Toon played Everton away in the FA Cup qwaata finals and the ticket office woz swamped with ower 20,000 applications for the 6,000 tickets on offer!

To stop this 'mayhem' / NUFC season season ticket holders were asked if they wanted a random system where anybody could get a ticket by 'luck of the draw' ---ÒR a loyalty points system where fans were given priority on away games attended!
Fans voted for THE LOYALTY POINTS SYSTEM which haz been in place ever since!

Of course many fans just want to gan to the big games like Man U, Liverpool or of course WEMBLEY, but give the likes of  a near 800 miles roond trip to Swanzee on a Sunday afternoon at '4 bells' a MISS!---_az its live on the telly anyway!

Personally I have in the region of 500 loyalty points and I am guarenteed a ticket, az I have an 'Away season ticket' az well!
You may say that this iz unfair and a lottery shud be used---but listen to this--20 odd years ago we played Man U away and because of buildin work NUFC were anly given a few hundred tickets

The club had 2 busses to this game and 'the carrot' woz you were gaurenteed a ticket if you travelled with them!
Some of wor own fans on the busses sold their match tickets for up to TWENTY TIMES the ticket price to othaa fans desperate to get in (some fans paid £300 for £15 tickets!)
If you were one of those 'fans' who sold 'your soul' for a vast profit that day---"then hang your head in shame!"

ie: _If there woz a lottery, then fans who had ne intention of gannin to any away games, could apply for  tickets and they might be lucky and get one--- and then sell them on the black market!

Dont forget it woz the NUFC fans who voted for the loyalty system in the forst place!