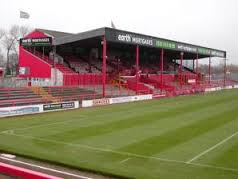 BELIEVE IT OR NOT!----this Tuesday neet pre season friendly was arranged by ‘then’ Toon manager Kevin Keegan, because as a young lad who lived in the nearby Armthorpe district of Doncaster, he used tih craall under the wooden fence at Rovers groond and get in for nowt!.

Nuw! wor Kev obviously had a guilty conscience and it must have been playin' on his mind aall those years and when someone at Belle Vue foond oot aboot this, after 'Special 'K' had admitted as much on a telly programme!
The Donny official was on the 'dog 'n' bone' as quick as a flash tih organize and demand a friendly for the hard up Yorkshire club, as 'compensation' for the revenue that they lost aall those years ago!.(so the story gans!)

'King Kev' even answered written pleas from cash starved Rovers fans to bring The Toon back to hiz place of birth, az their club had nearly been wound up by the Inland Revenue just a few months orlier!

Fourth Division 'Donny' were one of the poorest clubs in England back then (probably because of fans sneakin' in under the fence!) and the state of their groond cortainly reflected this.


For example, the visitors dilapidated and weed strewn terraces ran anly half way behind one goal with the rest of this end bein' covered by a shallow grass bank!. (some of the weeds were a foot high!)

The main stand with a dodgy lookin’ roof extention at the front, looked ready to faall doon at any moment and so we kept well away from that side and plonked worsels on the crumblin’ terrace ! (A sorry sight indeed!)

But!---it was the Newcastle team (who had narrowly avoid relegation to the ‘old’ THORD DIVISION just three months orlier!) who were ‘a sorry sight’ durin' the match!, and we could anly manage a ‘one's each’ draa against one of the leagues paupers!

Keegan opened Rovers new £100,000 floodlights<(where did they get the money from?)
but must have been ruein’ hiz decision to come home az Donny striker Mike Jeffrey missed two great chances in the forst 10 minutes to put the home side aheed!

In reply Micky Quinn and Lee Clark had efforts saved and David Kelly aalso went close az both sides went in goal-less at the break.


In the 2nd half Rovers again through Jeffrey had a glorious chance to put ‘The Paupers’ in from but shot waz well saved by defender Kevin Scott who cleared off the line with sub goalie Pavel Srnicek stranded!

The deadlock waz finally broken in the 75th minute when The Toon took an undeserved lead through ‘super sub’ Liam O’Brien (who had came on just minutes orlier) and he lashed in a Kevin Sheedy cross  in front of the Toon faithful standin’ in ‘The Giant Weed End’!<(wot else?)


The Fourth Division minnows were not to be denied though and ‘thorn in wor side’ Mike Jeffrey beat Kilkline on the right and wellied the baall into the net for a well desorved equaliser in the 83rd minute and the game ended aall square!

VERDICT: It’s just a pity WE could'nt find THAT gap under the fence to ‘escape’ from this dire performance!