This was Q.P.R.'s inaugrial season in the 'top flight', and we arrived in good time, (six am again!) for this Christmas fixture at Shepherd's Bush. (where Q.P.R. play) 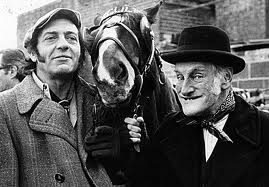 Shepherd's Bush waz aalso the 'home' of two of mee telly cult hero's of the time, namely, Harold and Albert Steptoe, who were 'rag 'n' bone' men in the classic 'Steptoe and Son'. Alang with their trusted horse 'Hurcules' they used tih trawl the streets of London collectin' anythin' from scrap metal tih peoples cast off clayz.

And low and behold!, az we were mekin' wor way tih the groond, a horse 'n' cart appeared around the corner with a gadgie shoutin' sommik unprenooncable at the top of hiz voice! (az they did!)

And I 'kid you not', he waz the 'spit' of Harold with hiz cloth cap, lang sideborns, scruffy coat and rolled doon wellies! He waz deein' a roarin' trade az he strolled alang with half an aad car exhaust pipe as an impromptu waalkin' stick!

Hiz cart was full tih the brim, with an aad tin bath tekin' 'pride of place' on the top of the pile of junk, as his horse (Hercules II?) 'clip clopped' it's way doon the street!

For a laugh ah asked where hiz faatha Albert waz, but aall ah got waz one of those: "YEE'D BETTA F*** OFF!, OR ALL BRAY YIH WI' MEE 'WAALKIN' STICK'", looks! (needless tih say---ah did'nt press him for an answer and 'hurried' towards the floodlights!)

ANYWAY!---(and getting' back tih futbaall matters!) 'The Leazes End Boot Boys' had came doon in force, and their aim that day was tih 'take' 'The Loft', which was the Rangers 'End'.

"YOUR GONNA GET YOUR F*****' HEADS KICKED IN!", the 'Boot Boys' sang az they charged towards the terrified Q.P.R. fans, boots and fists flyin'!


They found little resistance, and the Toon fans showed their Rangers counterparts plenty of 'Christmas spirit', by chasin' them to the other end of the groond!.


Because there was nee segregation, and very few aall ticket games in them days, it became the 'done thing' tih try and tek the 'Home Ends', and tih do so was a 'feather in the cap' for the 'Boot Boys'.


As far as they were concerned, another 'End' had been taken tih add tih the 'HIT' 'LIST'!, although, tih be fair tih Q.P.R., they neva had a reputation for bein' 'hard cases' and they were considered 'easy meat' for 'The Leazes Enders'!


(There's one thing for certain, we DEFENATELY would'nt be on the Q.P.R. fans, 'Christmas card' 'LIST'!) (For THAT YEAR at least!)


It's amazin' tih think nuw, that back in the 'sixties', there was nee attempt at aall tih try and segregate rival fans, and yih could just gan anywhere yih wanted tee in the groonds, by payin' at the turnstiles. (Try deein' that nuw!)

'The Loft' was behind one of the goals and had a low pitched roof which covered aboot half the spectators. To wor reet was the main stand, again this had a low roof and was aall seated with the touchline so close to the fence that fans could actually grab the players as they took a throw in!

Opposite this was the brand new South Africa Road Stand (nee where near---by the way!) that had been opened at the start of the season to 'commemorate' Rangers forst ever visit to the top flight, with seats at the back and a lower stand underneath, which had a small standin' terrace to the front (now private boxes!)

Behind the other goal was an open terrace with maisonettes 'pearin' ower the back. This was aalso the 'end' of the groond that aa 'spotted' Harold Steptoe and his 'orse (now 'remamed' 'The Rag 'n' Bone End'!)


The game at Loftus Road was an uninspirin' affair as Rangers huffed and puffed and ran aroond a lot, but 'The Toon' seemed to contain them fairly comfortably for most of the match. The Magpies relied on the occasional coonter-attack and the best that can be said aboot the game was that it was 'hard and rugged'.


The Toon were mid-table and Q.P.R. were 'rock bottom', so predictableee!, we were expected to win easily, aalthough, it was Rangers who had more of the possession in the orly stages. But!---on the other hand, it was Newcastle who created the more scorin' chances owerraall.

In fact, we would have won quite easily if it had not been for Ron Springett in the Rangers' goal as he produced some spectacular saves. He anly made one mistake – but it was a costly one!. He should have held on to a Pop Robson corner in the 16th minute but he dropped the baall and eighteen year old Alan Foggon, who played on the
wing that day, reacted quickest, pooncin' to open the scorin' at 'The Rag 'n' Bone End'.

'The Cragheed Flier' (where Foggon came from) frequently had the Rangers' defence in trouble with his pace and exuberance although his positionin' left sommik to be desired. Nevertheless, he forced Springett into a top class save late in the forst half as the 'keeper went full length to hold a shot by the Beatles-mopped winger.

The heavy pitch was strength sappin' as it was covered in thick sticky clarts and both teams were leg weary as the game approached its closing stages. Unpredictableee!---just when it seemed like we were gannih collect both points, (2 points for a win, then) a fatal lapse in concentration by the defence five minutes from time allowed Rangers to equalise. It seemed more by luck than intention that a clearance upfield by Bobby Keetch landed just in the right place for Barry Bridges to score with the Tyneside defence at sixes and sevens.

It seemed as if the final whistle came two or three minutes orly which upset Les Allen, the QPR manager. He felt that they might have got the winner, a view not shared by Jawnil reporter Bob Cass, "I didn't fancy their chances of scoring before Shepherd's Bush became a dense forest", he wrote.

Certainly The Toon were well worth their point – a point that kept them in 12th place in the league.


(Unfortunatly for QPR, they stayed rooted tih the bottom, and come May, they were relegated back tih the old Second Division)


After the match wih headed for the centre of London, where the older Toon fans had gone for a 'gargel'. Not bein' or lookin' old enough tih get in the Bars, wih had tih stay ootside and 'cadge' a 'swig' off them, every nuw and again, when they sneaked the beer oot tih us!.


(Yih could say we were bein' 'weened' and were 'servin' wor apprenticeships'!)


At 'chuckin' oot time', wih headed for Kings Cross tih catch the bus yem, but not before nearly 'keelin ower' with the half dozen or so 'liquids' that wi'd each consumed!.

(Divvint forget!---ah was still a 'spring chicken' aged 14 (and a half!) and the 'apprenticeship weenin process' was still in it's orly stages back then!)

Aa got yem at 'seven a.m. bells' and crashed oot in mee 'pit' for the whole of Sunday with a rather large hangower! And it was just az well that a'd broke up for the school Christmas holidays, az the next day was a 'non starter' iz well!

Posted by fink the mad-sad groundhopper at 12:09