Before the game we aall thought that a point would be a great achievement, but realistically we thought that we wouldn't even get that after a poor run of form!
The Foxes of Lestaa (hence: The Basil Brush Brigade!) were on a roll and were odds of favorites to win this Friday neet televised game at The Walkers Stadium (its original name)

'Blondie Alan the Morris Dancer' woz drivin' doon, az we couldn't get back by train coz of the kick off time (how many times have we said that this season!)
Blondie lives in Langley Park where Bobby Roson came from and so we caught the train to Durham station ('me' and Big Al <(not the sheet metal workers son!) where 'Blondie' woz pickin' us up! 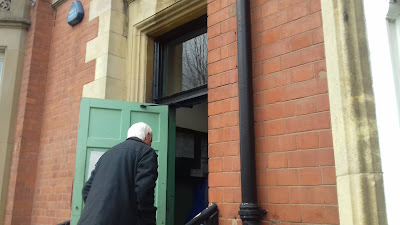 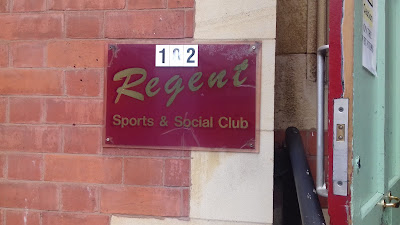 It woz then 'onward' to The Regent Club' in Lestaa which iz wor normal 'haunt' when we gan there, for the usual pre match 'gargels'!

After several 'liquid lubrications' it woz time to heed for the tornstiles where ower zelious stewards and 'dibbles' were searchin Toon fans before we were allowed in.
It took absolutleee ages and we just made the kick off after queuin' for 20 minutes!
Aa didn't even have time to gan to 'the tool shed' for a quick 'gypsies' and heeded for mee seat just az the game kicked off!

The Toon had set up to 'gan for it' az we attacked the far goal from the away fans corner!
Rondon had a great chance orly on when he hit a free kick from just outside the box which rattled the left hand post/bar corner, and went oot of play!

The Basil Brush Brigade then had a chance to equalise but Dubravka in the Toon goal made a great save to deny them! 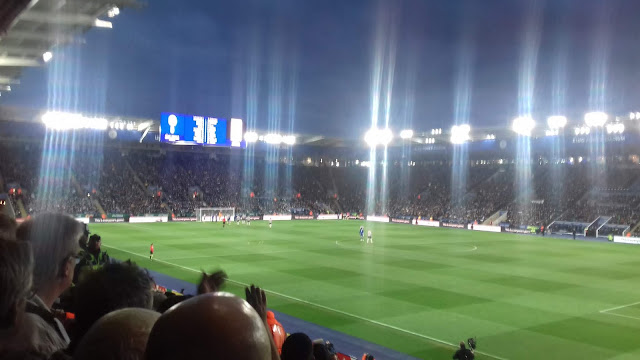 And then the breakthrough which woz to prove decisive----Almiron's cross into the box woz blocked, but the baall fell nicely to Ritchie, who ran roond the back of their defence and sent a cross in which Perez expertly torned and heeded into the far corner of the net to send the 3,000 plus Geordies wild with delight!

It woz 1-0 at half time and aa rushed to the 'tool shed' to get rid of some of the 'liquid lubrications' which had bee consumed in the club one and a half hours before! 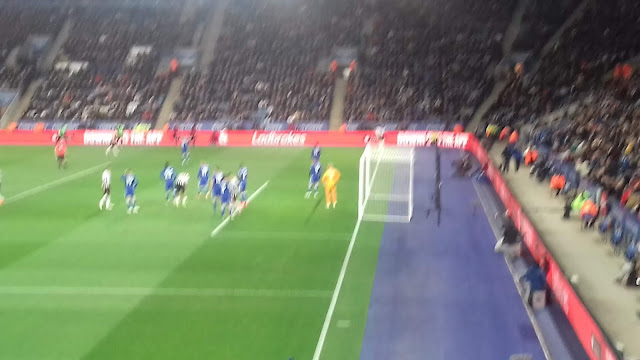 Lestaa came oot for the 2nd half and went straight 'for the jugular' but wor defence held firm az they attacked the far end from us!

Vardy had a great chance to level things when he beat wor defence but hiz shot sailed ower the bar to ironic cheers from the travellin' faithful!
5 nail bitin' minutes of stoppage time were added befor ethe ref finally blew for full time to massive cheers from the Toon contingent!

We are nuw 10 points clear of 'The Taffy Noses' of Cardiff in the last relegation place, with a far suprerior goal difference, which makes it virtually impossible for us to fall through 'The Championship' 'trap door'!

The jorney back up the M1 woz a happy one for a change, havin won wor forst away game of the year (wor 3rd in total!) and we arrived back on Tyneside at '2am bells'!
I then dragged mee lifeless body oot of bed at '8am bells' to gan and watch 9 year old grandson Jamie play for Redheugh Whites against Redheugh Reds!  Jamie scored but 'The Whites' lost 4-2 in front of a 'crowd' of 20 or so!

Then later on today a'm of to Bishop Auckland where mee fave non leegue team, The Bad Blue Boys of Dunston are playin' in their final Northern Leegue game of the season, havin won the leegue the week before! (Match report (of sorts) on that one tomorrow!

* After the match The Leicestershire 'Dibble' Force tweeted this! 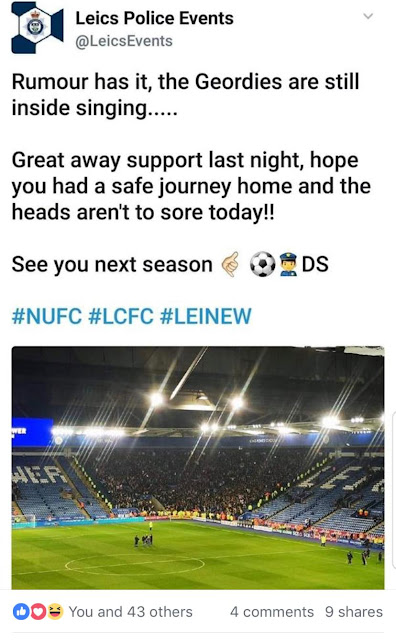 And from a Leicester resident! 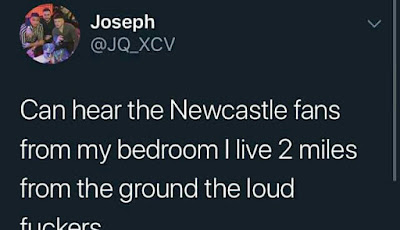 *FOOTNOTE:
The Bad Blue Boys of Dunston won 3-0 against The Bishop of Auckland!
Bishop's finished 3rd in the Northern Leegue and miss oot on promotion!
Dunston are champions and gan up to 'level 8' in the futbaall pyramid system!

Pix from game below: 'The Bad Blue Boys' are in their aall red change strip! 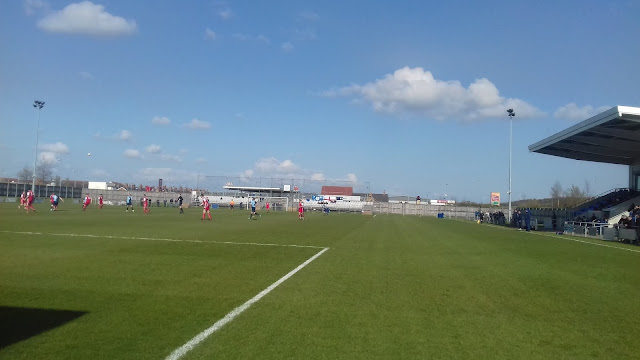 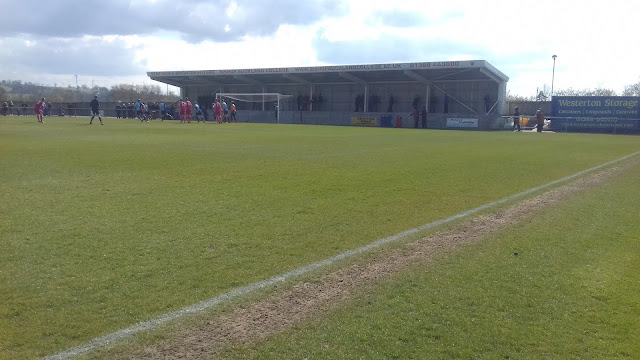 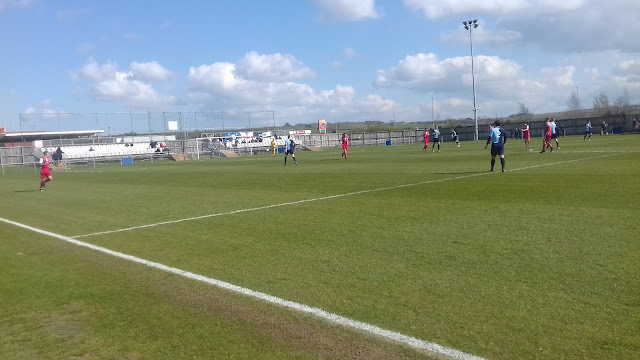 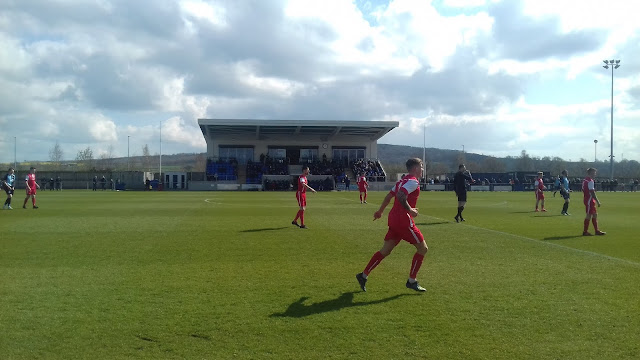 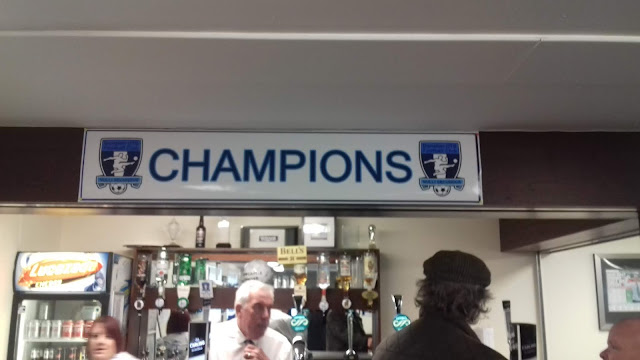 AND BACK AT THE DUNSTON CLUBHOOSE AFTER THE GAME!

Posted by fink the mad-sad groundhopper at 11:30