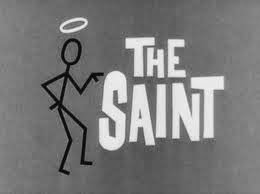 
Mee Skool mate, Keith Carrol, who was'nt even a futbaall fan?, said he fancied gannin', just for the adventure! and SOME! adventure it torned oot tih be!

Wi'd left the Haymarket in the Toon just after friday midneet, az yih had tee back then! (If yi'd left, say, at six in the mornin', yih would'nt have made the 'three bells' kick off!)


It was a hell of a journey, as the roads were'nt too clever in them days, and it seemed tih tek 'for ever' tih get there and after a couple of stops for some scran and the 'toolshed' etc., (nee bogs on the busses back then!) we arrived ootside 'The Dell' at 'eleven bells', totally 'cream crackered'!

The Toon fans piled off wor bus and straight intih the nearest boozer for the forst pints of the day, but me and Keith could'nt get in coz we were too young. (We had tih settle for the local 'Greasy Spoon' for a 'cuppa' and a 'bacon sarnee'!)

As the teams came oot, the loadspeakers blasted oot 'The Saint' signature tune from the '60s' T.V. series, but!---(and tih my dismay!) there was nee sign of mee hero, Simon Templar!, (aka. Roger Moore) who was the 'superstar' of the hit telly show, and who used to appear in the openin' credits, where a white halo would 'miraculously materialize' above his heed, as he looked skywards!. 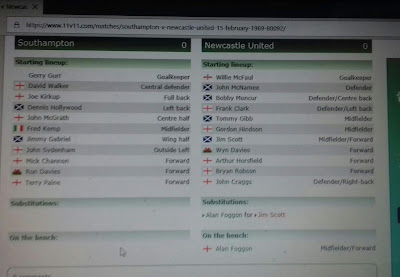 Newcastle torned oot in their aall blue away strip and were by far the better team on the day. Toon number eight Arthur Horsfield looked the most likely tih score and a excellent shot from him was finger tipped ower the bar by 'Saints' keeper Gurr.


Wyn Davies and 'Pop' Robson aalso went close for the 'Blues', but it was Gordon Hindson who missed the best chance of the match when he 'skyed' a simple chance from aboot six yards in the second half, and wih had tih settle for a point as the match ended in a goal-less draw. 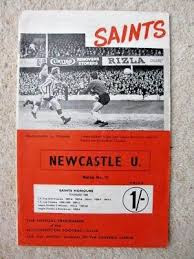 The Toon should certainly have won and we definately had 'The Blues' as wih set off on wor lang trip yhem, which torned oot tih be pretty uneventful, which is in complete contrast tih mee visit there fifteen years later, when another coach trip, organised by 'one' 'Monty', included a neets stay in a cheap hotel (i.e. minus 'five stars'!) alang the sooth coast in Bournemouth. 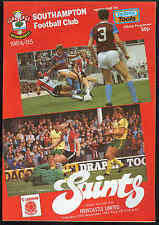 "WHO'S PINCHED THE BED OOT OF ROOM SEVENTEEN?!"

Originally, we were gannih gan tih Soothampton on a trip with nee owerneet stay, but we were let doon at the last minute when the bus waz cancelled!


A’d hord through the grapevine that a Toon fan  who everybody naaz az  ‘Monty’ waz runnin’ a trip with an owerneet stay at a hotel in Bournemooth.


This sounded too good tih be true and waz reet up wor street, so ah waz straight on the ‘blower’ tih book some places for the lads.---But there WAZ a catch!

Az this was aalready five bells on the Friday neet wih had nee time tih loose, so ah got in touch wih the lads and hoyed a few ‘essentials’ intih an owerneet bag (mee ‘Toon top’, a pair of ‘under-keks’, (just in case ah farted ‘n’ ‘followed through’!) and a ‘six pack’!)


Ah then heeded for the Toon tih meet up wih the lads for the Friday neet session,


before heedin’ for ‘The Tanners’ and the lang jorney tih the sooth coast.

Az soon az ah gor on the bus ah could see that it waz full of ‘radgies’, ‘plonkies’ and ‘heedbangers’!, and ah could ‘sense’ that it waz gannih be an ‘eventful’ trip, tih say the least!


Like ah say!---there wornt enough seats tih gan roond, so ah just stood in the gangway while others opted tih climb intih the owerheed luggage racks, (not an ‘option’ for me, az ‘mee frame would’nt fit in’!) while ‘Piper’ corled up on the floor and tried tih gan tih kip!

This WAS’NT a good idea!, az the ‘gargel’ soon started tih get spilt and run doon the aisle, and,(worse still!) az the ‘tool-shed’ waz soon full tih owerflowin’, some ‘pissbrains’ decided tih lob their ‘secret weapons’? oot and get a piss in their empty cans, which iz’nt so eazy when the bus iz deein’ seventy doon the motorway!, and add the fact that by this time they aall had ‘double vision’, most of them ‘missed the target’ and ended up deein it on the floor!

Before lang the whole bus waz ‘awash’ with beer and piss and poor aad ‘Piper’ who waz ‘deep in the land of nod’ by nuw, (ZZZZzzzz!!!!) got ‘a wash’ that he did’nt expect!

Sometime later and after several stops tih empty the blocked ‘tool-shed’, (and wor bladders!) we arrived at wor destination in Bournemooth and hoyed wor bags intih the hotel. By this time mee poor aad ‘bacon ‘n’ eggs’ were achin’ with havin’ tih stand aall the way, but at least we were here and ah plonked meesel doon in bar, aall to ready for the forst ‘liquids’ of the day!


Then it waz off on the bus again in the direction of Soothampton and we stopped off in a little village aboot half way between the two places.

After a (canny!) few ‘gargels’ wih heeded back for the bus, but it was suroonded by the local ‘Dibble’?


Apparently!---somebody off the bus had decided tih dee a bit shoppin’ in the local ‘offy’, instead of gannin’ on the ‘razzle’?---BUT!---the anly trouble waz----they did’nt fancy payin’ for it!


Az he waz wearin’ a black ‘n’ white Toon tops, it did’nt tek a brain sorgin tih work oot that the ‘culprit’ must come from the bus with ‘Newcastle Upon Tyne’ written on the back!

At forst ah thought we were aall gannih get ‘collared’ and miss the match! (god forbid!) but common sense prevailed, and the goods were returned (unopened!) and we were allowed tih gan on wor way! (complete with a ‘blue light’ escort!)

Because we were nuw late because of the ‘hold up’, wih had tih mek a ‘beeline’ for the groond az soon az we got tih Soothampton and we (just!) made the kick off with anly seconds tih spare!

The Dell I’m afraid waz still the cramped dump that a’d frost visited back in 1969 and with nee room tih expand their hemmed in groond, it would surely be anly a matter of time before they moved tih ‘pastures new’ (am ah psychic or what?)


Tih cut a lang story short, the Toon lost this one, one-nowt, in a close fought game.


As soon as wih arrived wih made for the hotel for a quick wash ‘n’ brush up before gannin straight on the 'hoy'. Sometime later, after several gallons! of the local 'hooch', and some 'Desperate Dan' at the local 'Chingkeez', wih craalled back tih the hotel for a good neets 'shut eye'.


The next mornin' was pandemonium!.


One of the lads knocked on his mates room door, and pretended tih be the hotel manageress, by speakin' in a (very!) high pitched voice. "YOO HOO, BREAKFAST!", he caaled oot.


His mate answered back, "CHEERS PET!, AAL NOT BE A MINUTE!".


He 'hoyed his gear on', opened the door, and his mate, who was hidin' behind it!, threw a fire bucket full of waata aall ower him!.


He just stood there like a drooned rat!, with his hair and clothes, drippin' wet!. The whole room includin' the bed, was completely soaked!, and before lang 'aal hell broke loose!, with 'waata fights' gannin on aal ower the place!.


The hotel manager, it has tih be said, was'nt ower pleezed! (slight understatement!) and he caaled the local 'Dibble' tih hoy us oot!  (ah would'nt iv minded, but ah was 'clammin', and ah had'nt even had mee f***** brekeez!)


Wih got on the coach and 'Monty' (who was lookin' a bit 'pissed off') took ahaad of the microphone at the front of the coach, an' blurted oot, "AALREET LADS!, WHO'S PINCHED THE BED OOT OF ROOM SEVENTEEN!?".


Apparently, some 'joker' had 'half inched' the bed oot of his mates room for a laugh, and had hid it in a 'bog' on the forst floor landin'!!. Just how he managed tih get the bed into the 'tool shed' is anybody's guess!??.

Anyway!-----the 'Dibble' eventually let us gan when they foond the missin' bed!, and we were given a police escort back tih the motorway by the Dorset Constabulary, who were glad tih see the back of us!. (So---nee doubt, was the hotel manager!)

And the moral of the story is:

Email ThisBlogThis!Share to TwitterShare to FacebookShare to Pinterest
Labels: 008 the dell southampton