A non descript match against the ‘appropriately’ named Olymiakos <(az this waz the same neet az the openin’ ceremony of the Olympic Games in London!)<(thank god we missed that!) ended aall square afta a penalty shoot out in front of barely 1,000 spectators in this 30,000 capacity stadium which waz in the middle of ne where and EIGHT miles from Faro where we were stayin’ and where the ground waz 'supposed' to be! (It waz aalso used for European championships)
﻿

Before the match at the tornstiles, aall bags were searched and the security gadgie on the gate tried to confiscate ‘Sarnie Steve’s Morrisons carrier bag full of sarnies and he waz forced to eat them ootside the ground before they would let him in!


It waz a sun drenched day and The Toon had a followin’ of aroond aboot 400, many of whom were holidaymakers who just happened to be in The Algarve for their summer break!


In complete contrast aa counted a total of SEVEN Olympiakos fans just alang from us!

Like aa say, the game waz non descript with Steven Taylor scorin’ wor anly goal in open play when hiz deflected shot from the edge of the box beat Roy Carrol in the Greeks goal


The anly otha ‘highlight’? of the game came when Modesto waz ‘red carded’ in the 73rd minute for a bad tackle on Amalfitano and they were reduced to ten men!


This seemed to fire them up however and (inevitably!) just five minutes later Olympiakos equalised through Mitroglu who wellied home from 20 yards oot!


A penalty shoot out waz then the order of the day (just when we wanted to gan for a ‘gargel’!) and when Cisse stepped up to take wor forst one, he inexplicably blasted hiz shot ower the bar into the 5,000 empty seats behind that goal!


However! That waz wor anly miss oot of five and with Olympiakos aalso missin’ one, it ended ‘fowers each’ and a stalemate! (the forst time a’v ever seen a draw in a penalty shoot out!?)


My original guess of a crowd of aroond 4,000 waz wildly ridiculed by the rest of the ‘mad-saddos’, who accused me of havin’ too much to drink! (Whey!---we had been drinkin’ aall day!---like!) and their estimate waz under a thoosand!


It waz then a hectic drive back to Faro in a taxi driven by a woman who thought she waz Lewis Hamilton az she took the hairpin bends at 90mph! (The ‘Caped Crusader’ reckons it waz 92.5!) and she went through at least fower traffic lights ‘on red’!---but we did get back to Faro for ‘midneet bells’ in ‘one piece’ for a few ‘liquids’, before heedin’ back to the Hotel Santa Maria for some much needed ‘kip’!  “ZZZZZzzzzz!!!!!”

Again it waz back to The Algarve ‘in the middle of newhere stadium’ for the last game of the tournament, where ‘Sarnie Steve’ had made contingency plans and had hiz doorstep sarnie clutched firmly in hiz teeth az we got searched once again az we entered the stadium!< (“gottle of gear” style!)


The security gadgie just looked at him dumbfounded az Steve waalked past, (‘sarnie in gob style’!)


(On the mornin’ of the game aa suggested that he hid hiz sarnies under hiz beanie hat to get in, but! the carrier bag waz too big and he had to abandon this method of smugglin’ hiz scran in!)


Anyway!---Enough of that!---There were aboot the same number of spectators in the stands az the day before and included at least two from Blackborn Rovers!?

It livened up in the 2nd half, however! When ‘Marveaux the Magician’ waz upended in the box, resultin’ in a spot kick in the 63rd minute, which Demba ba took. But he put hiz shot to the right of the keeper who parried the baall oot back to Ba’s feet and he sidefooted it into the back of the Braga net to put us in front!


The ‘inevitable’ equaliser came just 3 minutes later when a shot from Amorim caught Coloccini’s leg and the baall went past the stranded Steve Harper in The Toon goal!


Then! Just az though we were lookin’ likely to endure a penalty shoot out for the 2nd game and day in a row, up stepped wor ‘ower the waall’ specialist Ryan Taylor, to send hiz free kick from 25 yards oot (“er!”) ‘ower the waall’ into the back of the net in the 73rd minute to send the 400 ‘sun kissed saddos’ wild with delight!


Anothaa ‘cup’ waz in the cabinet? (to add to the one we won in Deportivo a while back!) and ‘Captain Coloccini’ held the glitterin’ trophy aloft for aall to see! 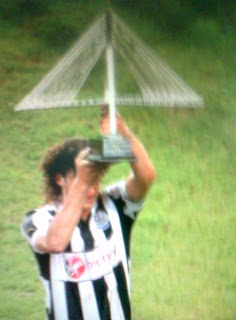 It actually looked like a very smaall umbrella, but waz in fact supposed to be ‘modelled’ on a local bridge! and so it waz ‘indeed’ a ‘brolly good’ show<(sic!) from the ‘black n whites’ az we heeded back to Faro centre to celebrate wor famous? victory!

Posted by fink the mad-sad groundhopper at 00:14