Attendance: 2,000, which included quite a few Toon fans who wornt supposed to be there! (plus 44,000 watchin on YouTube) 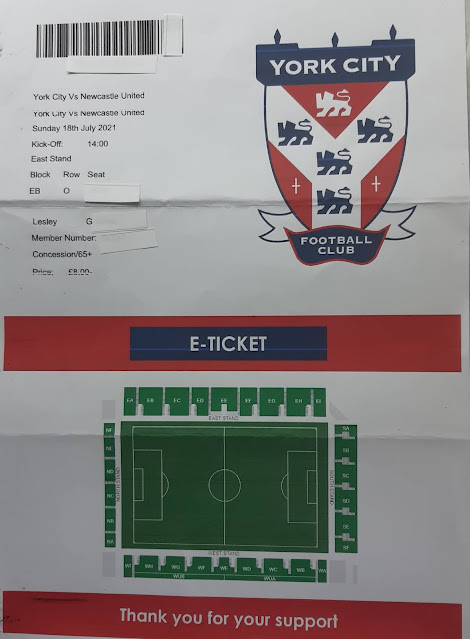 I'VE HIDDEN SOME OF THE E-TICKET DETAILS SO IT CAN'T BE TRACED BACK TO THE PURCHASER!

Where dee aa start with this one?

Mee forst 'new groond' match report for 18 months, and one played in the highest temperatures aa can ever remember for a Toon game!

'The NUFC mad-sad groundhoppers' had been tryin for weeks to get wor hands on match tickets for this game, az York had said that anly bona-fide season ticket holders could get their hands on a prized ticket to watch their team for the forst time in their brand new groond on the ootskirts of York!

A friend of a friend managed to get me 2 tickets at the last minute and az we set off to York on the train I noticed that mee ticket had 'Lesley' az the forename---the wife of the lad who got me the tickets! Mee mate Tex Taylor's ticket woz luckier and had 'Raymond' az hiz forename

Wot would I say if they checked the ticket name az I am obviously not a member of the fair sex!   Say I've had a sex change and changed mee name???   OR buy a wig and some mascara and lipstick in York and say that I woz a transvestite????

And az aa divvint naa mee dress size, coz a'v never worn one (believe it or not?) that woz oot of the question, az well!!!

I settled for sayin that 'Lesley' woz mee sister and hoped that that would work!  I would soon find oot when aa went through the ticket gate 4 hours later! 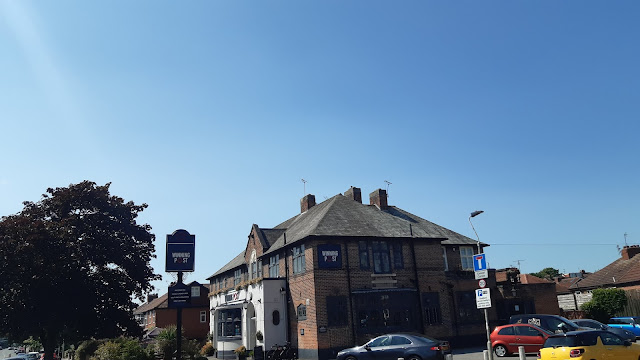 Anyway!---we arrived in York at '11:00 bells' and the forst boozer we tried to get into woz full, so we had to waak a canny way from the city centre to find one that we could get in----We foond one caalled 'The Winning Post' (near York racecourse) but had to wait til 'high noon bells' for it to open!----After a few pints we asked the barmaid for a taxi number to get to the groond which woz more than 3 miles from where we were!----We eventually got one and heeded to the groond!

It woz the hottest day aa can ever remember for a futbaall match and to complicate things further aa had to put on a light jacket to hide mee Toon tattoos----even takin the 6 Toon badges off in case they said 'home fans only' and bar me from entry! 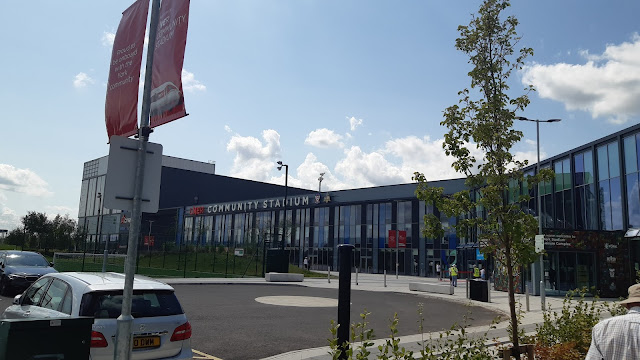 A nervously approached the entrance gate with mee ticket, hopin that the gadgy on the door didnt notice 'Lesley' on the ticket!----He DIDN'T (thank god!) and scanned it and aa woz IN!

Aa took mee seat with loads of empty ones on both sides and behind and noticed that aa woz the anly one wearin a jacket az everybody else seemed to be in shorts and T shirts!---I stuck oot like a sore thumb and woz sweating like a pig, so not lang after the kick off aa took it off and put it in a carrier bag, hopin that nee one would notice mee tattoos!  Indeed there were other Toon fans present and some even had a banner behind the far goal from me which said 'BELFORD MAGS' 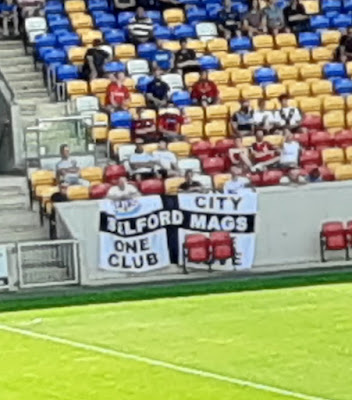 Anyway! the temperature reached 30 degrees after a while az the player struggled in the heat!---To take photos a'd even taken the Toon cover off mee phone in case anybody noticed!!!--- 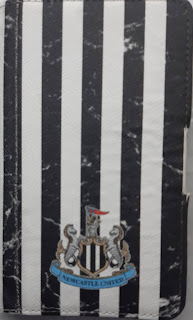 There woz nee way aa woz takin any chances!---But there WERE a few 'chances' on the pitch from both sides and Ryan Fraser had a great lob orly on which just missed the goal with the York goalie stranded!---This brought nice applause from the York faithful! (thanks lads n lasses!) 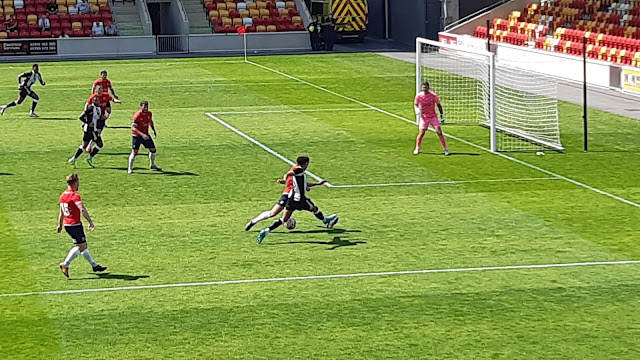 Because of the heat the game wasnt very good and in the 2nd half both Dwight Gayle and Saint Maximin had good chances to score, but their goalie woz in top form! 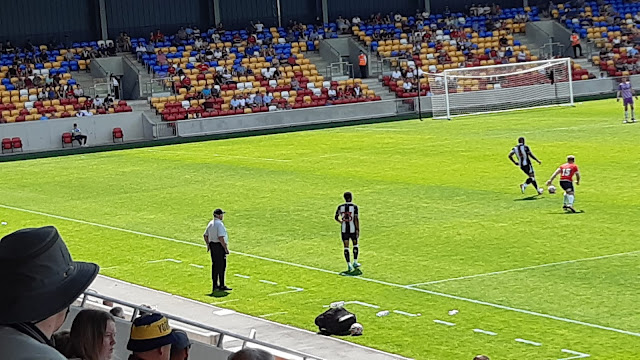 It shud be noted that wor FOURTH choice keeper Dan Langley woz in goal az Debravka woz injured and Karl Darlow, Mark Gillespie and Freddie Woodman had to self isolate!

This proved decisive in the 87th minute, when he woz unable to stop a heeder from York's Duckworth and the game woz lost! 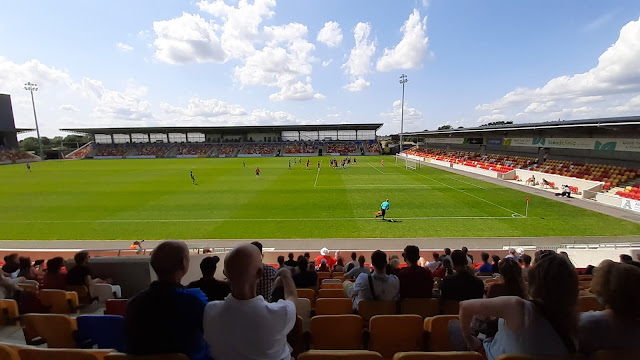 Near the end the stadium annooncer said that, "trialist B was being replaced by 'a trialist", for York!

This woz a strong line up from NUFC (apart from wor goalie!) and so to lose to a 6th tier non leegue club with trialists in their side, sends a worrying message to fans! 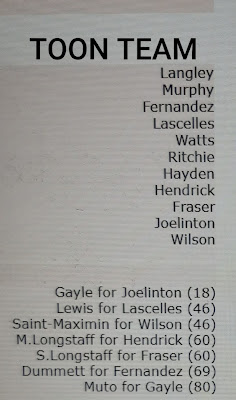 We heeded back into York via bus (showin mee tattoos and 'jacketless', az it didnt matter then!) for the last 'liquid lubrications' in 'The Corner Pin', before catchin the train yem! 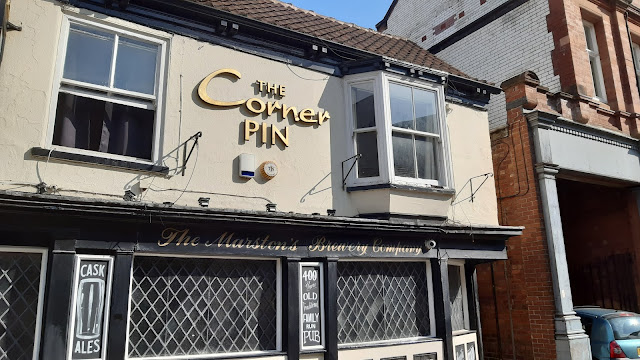 York fans sang "Premier League--you're havin a laugh!" when Saint Maximin missed a good chance, but it iz indeed The Premyaa Leegue themselves "havin a laugh" at the expense of us, followin the disgraceful decision to postpone the arbitration case to orly 2022, leavin NUFC in limbo yet again!

PS: Wor U23s, who played at Harrogate at the same time az the above game, aalso lost (2-1) with Kyle Crossley scorin' for The Toon in the 51st minute!