"WHO'S AFRAID OF THE BIG BAD WOLF!" 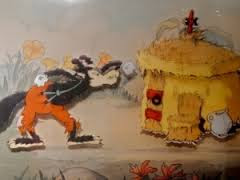 It was ‘six bells’ on the Saturday mornin’ when mee mate Billy, who lived in the next street ,  knocked on mee front door. At forst aa did’nt recognise him as he was sportin’ a brand new  skinheed haircut, a pair of ‘Doc Marten’ steel cappers and was wearin’ ‘his braces slack’ (as the aad song gans!) He looked a reet ‘hard case’ and was the ‘forst kid on the block’ to join the new skinheed craze that was sweepin’ the nation!

And so ‘it came to pass’ that me and mee mate, ‘Billy The Hard Case'  (as he was now known!) travelled doon tih Wolves by supporters bus from in the Haymarket.


It was Billy's 15th borthday and we were convinced that the Toon would win easily and on the way doon, wih stopped off at a motorway services for an hours break and heeded straight for the 'tool shed' for a 'gypsies kiss' as we were ‘burstin’ by this time.

Bein' 'hard cases', (Er!---aa was Billy’s ‘lieutenant’!) and after wi’d had wor ‘gypsies’, wih noticed that aall the bogs were empty as aall the doors were ajar. (so wih thought!)


There were aboot six bogs in a row, so wih decided tih kick aall the doors open, just for 'the shear hell of it!'.


Billy kicked the forst one with his new 'steel cappers' ---------the door hit the waall and nearly came off it's hinges!.


Ah kicked the second door, and so on. Wih got tih the last bog, and decided tih kick the door together.


Wih kicked it as hard as wih could and the door swung back and wih heard a loud crack!--there was a slight pause---and then there was a very loud high pitched scream!---which went something like---"AAAAAAAARRRRRRRRHHHHHHH!!!!"

There for aall tih behold, was a gadgie sittin' on the pan, gettin' a 'dynamite!', with his strides aroond his 'Hans Crankels'.


He obviously had’nt locked the door properly and he sat there  holdin' his 'Vesta Tilly' in one hand, and his 'toon halls' in the other!.


He was in agony, an' wih just stood there, 'rooted tih the spot!'. and it did’nt take a genius to  work oot that the edge of the bog door had hit him in a very ‘delicate’ area!)


He was built like the brick s***hoose he was sittin' in!, (very appropriate!) and he had a face 'a dog would'nt lick'!


When he'd regained his composure, he just 'eye-baalled' us!, torned 'bright red' with rage!, (bog rage perhaps?) an' shouted at the top of his voice!-


'PANIC STATIONS!!!'---Luckily for us, he had'nt 'finished!', and the fact that he still on ‘the pot’ with his troosers doon by his ankles meant that he could’nt chase us!---SO!  (az yi de!) wih 'legged it' as fast as wih could tih the 'tool shed' entrance, pushin' each other oot the way, in the 'mad scramble' tih try and get oot the door forst!.


Wih ran aroond the corner and hid behind some rubbish bins, until it was time for the bus tih leave. Wih sneaked onto the bus by the emergency exit, prayin' that he would'nt 'clock us', and---after what seemed like an age, we eventually drove off---phew!---we were safe!.


Wih had a great laugh aboot it (and still de!) and telt everybody on the bus what had happened, not mentionin' of course, that wih ran off, scared oot wor wits!------after aall, we were 'hard cases'---WERE'NT WE!?.

An aad gadgie on the bus aged aboot thorty five, gave Billy a pork pie. (when yih anly fourteen, thorty five IZ aad!)  As he was tekin' the second bite oot of it, he noticed sommik black, baked in the middle.


The gadgie took one look and telt him it looked like a deed fly which had met a horrible death by bein’ baked alive in the pie!


This was too much for Billy, and he promptly ‘hoyed up’ aall ower the back seat and doon the bus window!

We arrived at Molineux aroond an hour before the kick off, tih be 'greeted' by aboot 200 Wolves fans who were waitin’ to ambush the away coaches, and they charged at us doon the hill, next tih the 'South Bank End'.


Wi'd arranged tih meet Billy's older brother Alan, who lived doon there, and, as luck would have it, we were runnin' in the reet direction, and bumped into him next tih the main entrance.


Wih quickly decided that the safest place tih be, would be inside the groond, and headed for the turnstiles at the 'South Bank'.


This end of Molineux was massive and was aboot fower times the size of the 'North Bank' opposite, where the Wolves 'Kop' was and we were telt that it held 30,000! (more than half the groonds capacity!)


The 'Molineux Street Stand', tih the right, had a multi-span roof and was a weird lookin' thing. It was twice the height at one end than the other, and it looked lop-sided and ready tih faall doon!.

However, it was the Toon's defence that was 'lop-sided' and we were two-nowt doon by half time!. The second half was even worse, and before lang we were fower -nowt doon, and goalie Willie McFaul looked 'as sick as a pig!'.


Billy and Alan wanted tih gan, but aa insisted on stayin' 'tih the bitter end', and mee 'loyalty' was rewarded, when Wolves scored again, just before 'the death'.


On the final whistle, wih heeded for Alan's hoose for some 'tea and sympathy', before catchin' the bus yem, prayin' that wih would'nt be stoppin' at the same motorway services on the way back!.