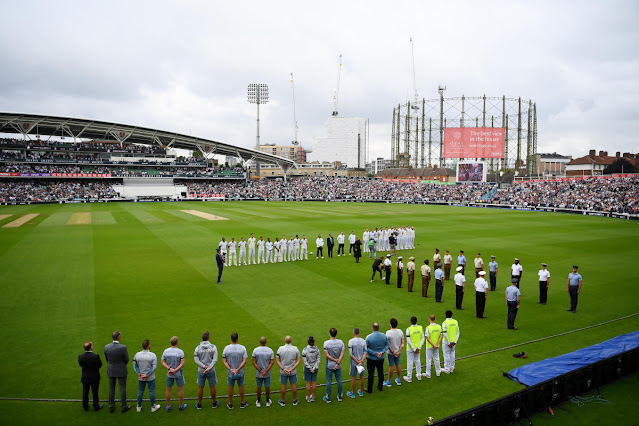 CRICKET FANS AND PLAYERS SING "GOD SAVE THE KING!" AT THE OVAL IN LONDON!--BUT WHY WERNT FUTBAALL FANS ALLOWED TO DEE THE SAME!???

News that both wor games in November v Sooothampton away and Chelseee at SJP have been moved for live telly reached 'The Geordie Times' last neet! (See article below)

When the original fixture change for the Sporz game woz annoonced, we booked trains and a hotel for the Saturday neet, az it would have been a mad dash to catch the last train from King's Cross with a late finish (approximately '7:30 bells' with stoppage time---last train '9ish' on a Saturday!)

To change the game once iz bad enough----but to change it yet again shows utter contempt for travellin Toon fans after wor game at West Ham woz cancelled last Sunday because of the Queen's death! (Trains and hotel refunds requested and thankfully granted!)

Wot got us aboot the West Ham game, woz the fact that on the day the game woz to be played (Sunday) there woz a cricket test match at The Oval a few miles away, which went aheed????   Aalso golf and both codes of rugby and The Great North Run, took place ower last weekend----but of course the futbaall MUST be cancelled, az lang sufferin fans try to claim refunds for unneeded train tickets and hotels!

It wud have been nice to show wor appreciation for the Queen last Sunday at the London Stadium, but this woz denied of course, thanx to the 'sweet' FA!

Posted by fink the mad-sad groundhopper at 12:07