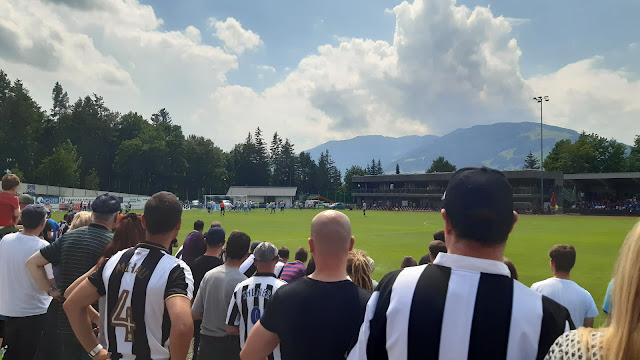 "THE HILLS ARE ALIVE WITH THE SOUND OF GEORDIES!"

Three of us travelled from Tyneside to Tirol via Manchester Airport and based worsels in a hotel not far from Innsbruck Airport for a few days stay to watch the two games against Jawman opposition on Austrian lower leegue groonds, namly 'Big Al (NOT the sheet metal workers son) and International 'Russ'cue (Who came wor 'rescue' a few years ago in Cardiff, when wor car broke doon on wor way to Swanzee)

Anyway!----after sussin oot Innsbruck's 'Inn's the previous day, we made wor way to a place caalled 'Worgl' where we had to change trains to get to Saalfelden where the forst game of 'The Austrian Tour' (of two games!) woz bein played on a Friday afternoon! 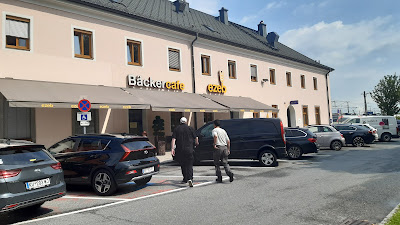 We had a bit time on wor hands---so---az yi dee, we heeded for the nearest drinkin den near Worgl station for a quick 'gargel' before catchin' the next train to Saalfelden (A 70 mile jorney through the Alps from Innsbruck) 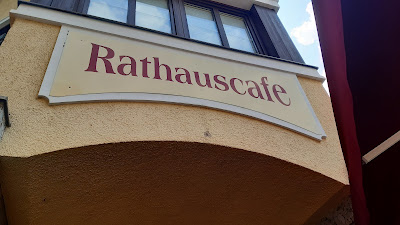 Arrivin in Saalfelden we heeded for the toon centre for a gargel in Rathauscafe before movin on to a bar next to the groond which owerlooked the Alps in the distance, before heedin for entrance to the groond! 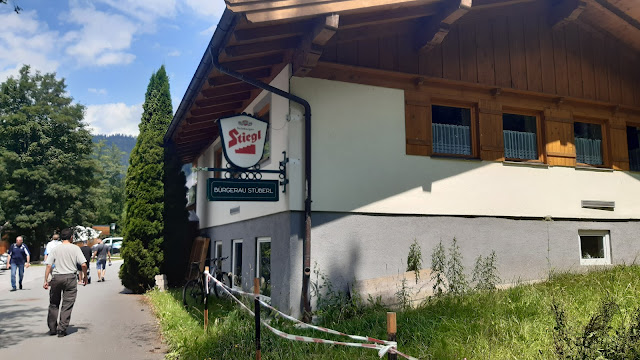 THE VIEW FROM THE BEER GARDEN!

Monsoon conditions were forecast durin the game but luckily for us the heavy rain had arrived in the mornin and had stopped by the time we got to The Saalfelden Arena! Instead there were humid conditions az the temperature soared to aroond aboot the '30 mark'

The game kicked off at '2:30 bells' and it looked az though aroond aboot 500 fans had made the trip from Jawmany and Tyneside and we were both 'housed' on an open terrace, with the opposite main stand a 'neutral' area for the locals! 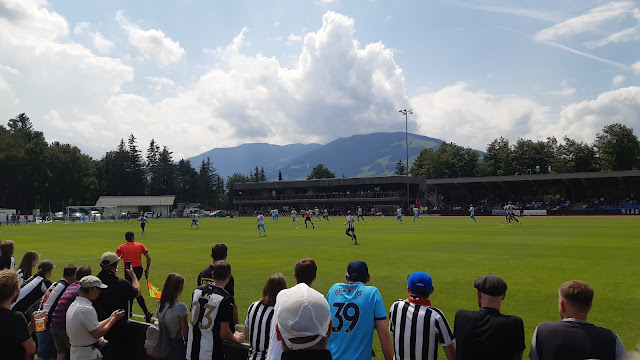 With a capacity of just 1,500 this groond is smaller than local non leegue Tyneside teams like Whitley Bay, Dunston and Heaton 'Stan'

Luckily there woz nee sign of any rain, which woz just az well az we didn't bring any 'nanny goats' (coats) with us!---Instead humid conditions in a bakin' heat

The groond iz literally suroonded by high Alpine mountains and iz the most picturesque groond av ever been tee oot of the 356 watchin' The Toon!

A VIEW TO DIE FOR!

The 2nd half woz much better fare and the deadlock woz broken in the 55th minute when a through baall from Shelvey foond Joe Willock and he fired great shot into the net! 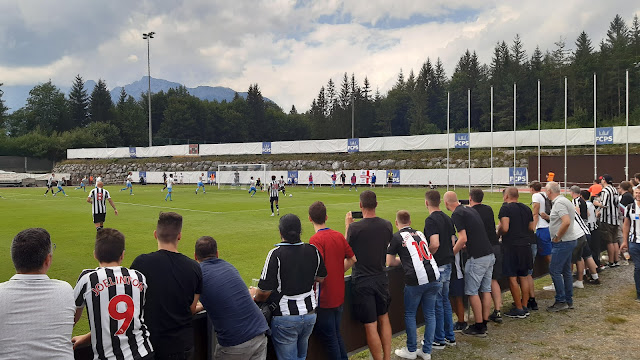 I never realised that Nick Pope had been one of those who had been substituted and loudly praised him for heedin a baall ootside the box!---much to the amusement of The NUFC mad-sad groundhoppers az DUBRAVKA had replaced him in goal! (must get mee 'mince pies' tested!) 😳 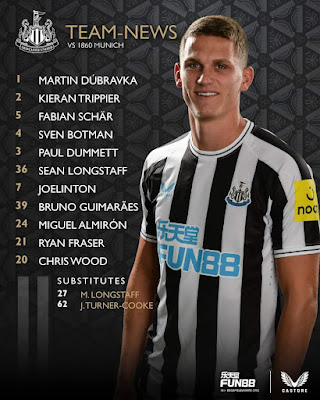 The subs who came on

Then we got wor 2nd goal when Bruno passed to Sean Longstaff and he hit a beauty into the goal in the 66th minute!

It woz soon 3-0 when Bruno hit a fine effort past the 1860 keeper to send the 250 or so Toon faithful wild with delight! (The hills were alive with the sound of Geordies!) (sic!)

This woz the final goal of the game! 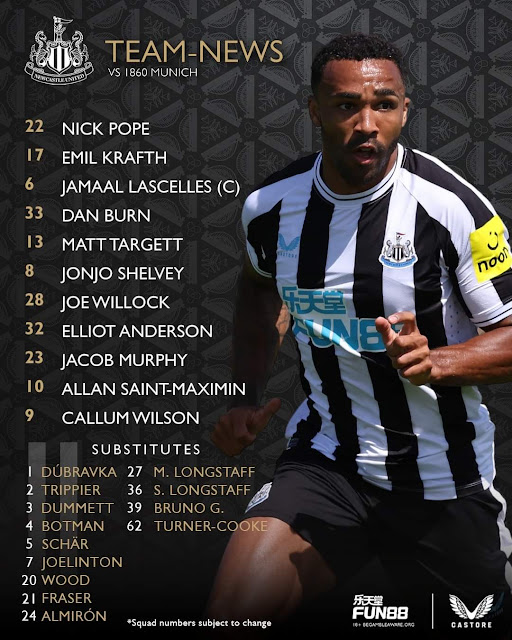 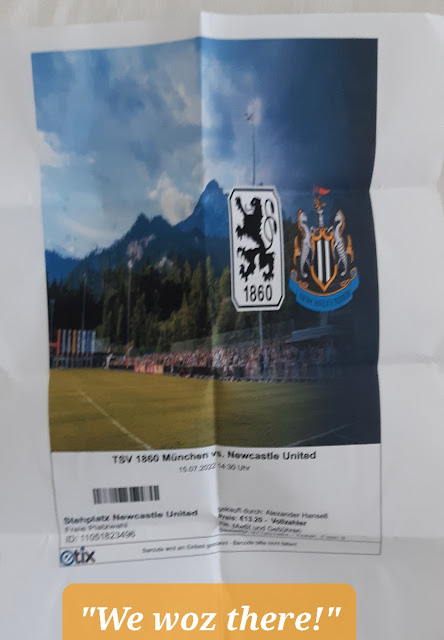 We heeded back to the beer garden train after the game and had a few celebratory gargels, before catchin the train back to Innsbruck! 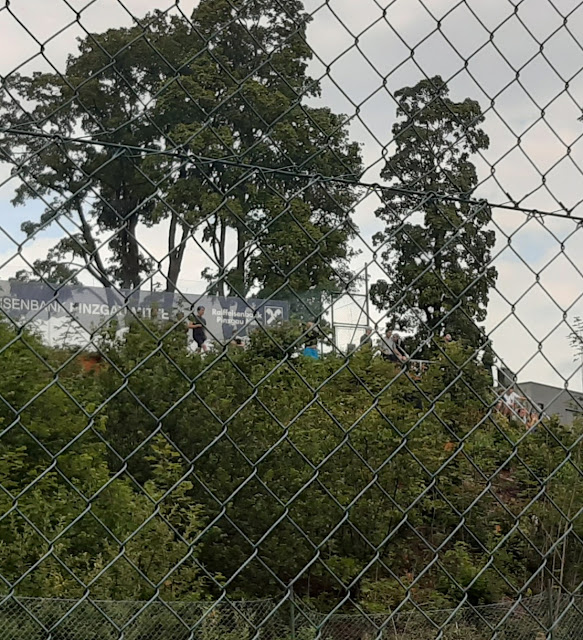 SPOT THE 'FREEBEEZ' WATCHIN' FROM THE HILLS? 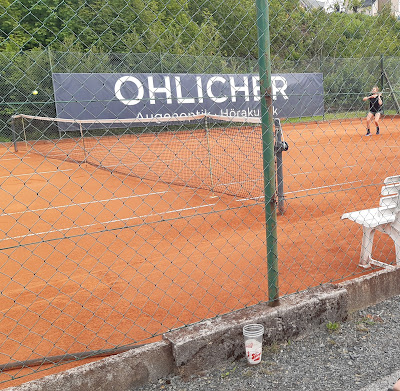 "ANYONE FOR TENNIS?"  WHILE THE FUTBAALL MATCH WOZ GANNIN ON THERE WOZ A TENNIS MATCH GANNIN ON BEHIND US!   THE PARTISIPENTS OBLIVIOUS THAT THE WORLD'S RICHEST CLUB WERE PLAYIN ON THE FUTBAALL PITCH BELOW!

Posted by fink the mad-sad groundhopper at 11:03